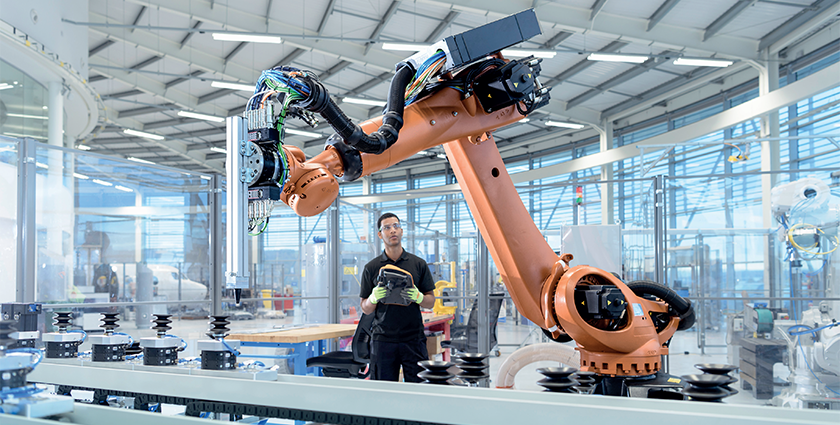 Since the invention of the steam engine and the assembly line, manufacturers have been at the forefront of the industrial revolution. Recently, they have begun investing in advanced automation technologies such as autonomous robotics, IoT, artificial intelligence (AI), machine learning (ML) and digital twins. Often referred to as Industry 4.0, this group of technologies also crucially depends on network connectivity, with wireless preferred in the future. There are several different wireless network options, but 5G is justifiably getting most of the attention these days.

Cutting the cable
Manufacturers today are looking for ways to become more agile and responsive to shifting demand. The globalization of markets and supply chains has increased efficiencies, but it has also created greater swings in demand and supply trends. A major driver of Industry 4.0 adoption is the ability to pivot quickly, either to match demand or adjust to supply chain issues.

Traditionally, assembly lines have relied heavily on communications based on cabling. Technologies like Ethernet provide the speed, security and low latency for critical machine-to-machine communications. The downside of Ethernet cabling, however, is that it is expensive to re-wire the facility when re-tooling and has no solution for mobile assets.

What makes 5G especially interesting is that it can match the bandwidth, reliability and latency performance of Ethernet with no cables. It is deterministic, which means that operational technology (OT) personnel can specify specific parameters that must be met. This contrasts with a typical wireless technology like Wi-Fi, which is non-deterministic and ‘best-effort’ by standard. For most automated manufacturing use cases, deterministic communications are preferable, if not essential. 5G has been specifically designed for industrial use cases with the ability to achieve ultra-low latencies (in the 1ms range), very high bandwidth (e.g., for video and augmented reality) and massive machine-type communications.

Sensors, sensors, sensors
One of the key trends in advanced manufacturing is low-powered sensors capable of running on five-to-ten year batteries or using energy harvested from other processes. These industrial IoT (IIoT) devices are rapidly proliferating throughout the manufacturing process. They capture data on every conceivable process, and play an important role in automation.

5G can also handle low-power sensor communications. However, because it draws more power, it usually complements other low-powered wireless technologies. Use cases for 5G include sensors that only need to update occasionally, are located farther away, aren’t battery-powered or are on moving equipment. 5G can be integrated with IIoT gateways to backhaul sensor data.

One of the key benefits of this evolution is that AGVs can sense obstacles in their path, alter course to avoid them, and use system-wide traffic information to compute more efficient routes to avoid congestion. The smart AGV makes these decisions using a combination of local sensor inputs and centrally communicated routing and traffic information. Central material resource planning (MRP) and digital twin software can keep constant track of loaded and unloaded AGVs and optimize the fleet routing at any time.

There are two ways to handle the required information processing for the AGV: one is to use an on-board computer, the other is to handle it using an edge cloud. Putting the compute resources in the edge cloud lowers the cost of the AGV unit, just as long as there is low latency communication between the AGV and the edge cloud. Either way, reliable wireless connectivity is needed.

This is a use case where 5G is the obvious wireless technology. It is designed to handle mobile communications at speeds greater than 4.5 mph (unlike Wi-Fi) and is capable of ultra-reliable low latency communications (URLLC). Being broadband, it can also carry video and audio streams that allow central or floor personnel to monitor and remotely control the AGV if it gets into a tricky situation.

Coverage and reliability
Many manufacturers have already installed Wi-Fi to handle some of the wireless communications functions discussed here. However, the arrival of 5G opens new possibilities and will help to overcome many of the issues that are known to have plagued Wi-Fi installations.

Although IT teams are more familiar with Wi-Fi, the two technologies aren’t dissimilar to install and operate. Industrial, campus-based 5G solutions use small cell radios that are very similar to Wi-Fi access points. The core network functions of the 5G network can be housed in a local server, which can also double as the local edge cloud. The up-front equipment is more expensive than Wi-Fi, but the total cost of ownership is similar or lower because of the superior radio coverage and performance of 5G.

Wi-Fi radios are known to struggle in high-ceiling, metal structures – typical of modern factories, where there is a lot of signal interference. The consulting costs associated with engineering the Wi-Fi radio coverage has been known to exceed the entire cost of the hardware. And engineering of the radio coverage needs to be re-done whenever there is significant re-organization of the space. 5G, in contrast, is designed to provide broadband coverage in dense urban areas where radio interference is significant, thus requiring no special engineering to deploy in most factories.

A platform for Industry 4.0
5G can act in concert with other wired and wireless systems and, in some cases, replace them. It can connect smart PPE wearables, handheld terminals and smart tools. It supports push-to-talk and push-to-video communications, as well as augmented reality heads-up displays. In other words, with a few exceptions, 5G can replace almost any current wireless and cabled communication system used in today’s factories.

This consolidation onto a single connectivity platform reduces operational overhead and provides manufacturers with a foundational technology for expanding automation and realizing their Industry 4.0 ambitions. Although only recently available, 5G and its release roadmap is quickly rolling out and is likely to play a pivotal role over the next decade in the evolution of autonomic manufacturing.

Tom Richter
Tom Richter is Global Head of Discrete & Process Manufacturing Verticals, Nokia. He is responsible for the design and specification of tailored network solutions based on the specific vertical requirements of manufacturing companies. As a trusted partner for critical networks, Nokia is committed to innovation and technology leadership across mobile, fixed and cloud networks. It creates value with intellectual property and long-term research, led by the award-winning Nokia Bell Labs. Adhering to the highest standards of integrity and security, it helps build the capabilities needed for a more productive, sustainable, and inclusive world.
www.nokia.com/networks/industries/manufacturing/