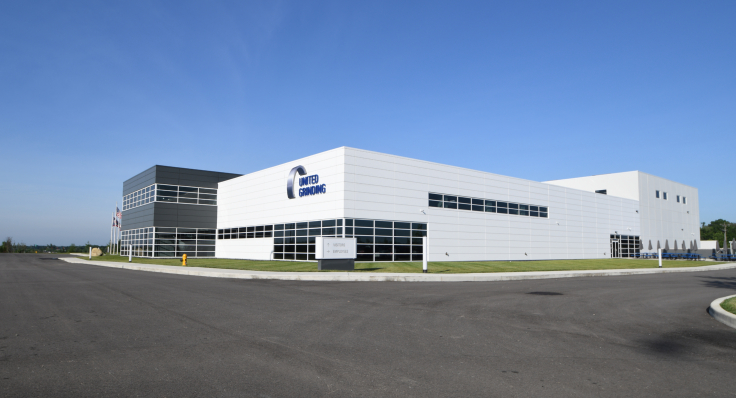 When clients come to UNITED GRINDING North America, Inc., they not only get quality machines, but solutions that are customized to their needs. “So often, the big challenge is adapting the grinding machine into the customer’s business model,” Vice President of Sales for the Profile Division Larry Marchand says.

UNITED GRINDING North America’s ability to solution focused has allowed it to thrive, Marchand says. “We give the customer a solution that not only includes the machine, but also the work holdings, the abrasives and the actual process he’s looking for,” he says. “A lot of companies don’t have the knowledge and depth to deliver that solution.”

“Now we have the ability to grind, mill, drill, probe and inspect all in the same machine,” he says, adding that this can help companies cope with the challenge of finding talent and minimizing touch times. “That’s valuable to the customer.”

UNITED GRINDING North America also modified the grinding wheel and diamond roll in the MFP 51. “It allows us a much bigger variety of shapes and forms that we can have in one grinding machine,” Marchand says.

The MFP 51 won a strong reception at the show, largely due to the fact that it can run on its own. This also fits the needs of customers who are struggling with labor shortages.

“They want to operate the machine 24 hours a day,” Marchand says. “The best way to do that is through automation. They can leave the machine in a position where it can operate throughout the night unattended.”

Product Possibilities
Hans Ueltschi, the vice president of sales for UNITED GRINDING North America’s Cylindrical Division, adds that his sector introduced its second generation WireDress® at the IMTS show. This comes from STUDER, a member of the UNITED GRINDING Group, and is used “to dress metal bond CBN wheels,” he says. 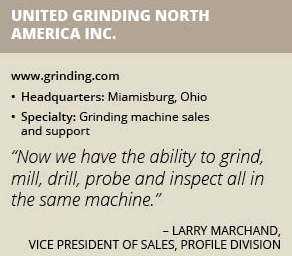 In the past, he says, the industry was not able to dress metal bonded wheels for particular shapes, other than straight or diamond wheels. Now, “We have more possibilities to dress these wheels,” he says.

The show also saw the introduction of the favorit 1600, a new generation of CNC machines from STUDER. “[It is] allowing us to do longer work pieces at a lower cost,” Ueltschi says, noting that this gives users flexibility in regards to dressing and grinding technology.

The machine has the ability to provide its own feeds and speeds based on metal removal rates and surface finish requirements. “That’s particularly important for an entry level machine now, because [of] the tight labor market,” he says.

As skilled operators get older and retire, it is increasingly “important that the machine becomes smarter in regards to the grinding applications,” Ueltschi says. “The younger generation that doesn’t have the experience can adapt more quickly and use it for training on how to grind.”

Complex Tools
Markus Stolmar, the vice president of sales for the Tool Division of UNITED GRINDING North America, notes that his portion of the business has a broad reach. In addition to tool cutter grinding, “We also offer laser technology, erosion technology and measuring technology,” he says.

At IMTS, his division exhibited its erosion machines, which can both grind and erode. “With the combination of our software, we can make very complex tools in PCD nowadays,” he says, noting that its clients include leaders in the aerospace manufacturing industry.

The division’s products also support other industries such as automotive and woodworking. “Those are the main uses of these types of tools that are produced in the machine,” he says.

Looking Bright
Marchand sees a strong future for UNITED GRINDING North America, particularly when it comes to its Profile Group. “From a business standpoint, we’re closely connected to aerospace and defense,” he says, noting that both sectors are seeing active growth.

“All three of the major engine builders have record backlogs to produce,” he says, adding that the company anticipates up to three positive years ahead for the Profile division.

The Tool Division also has a positive forecast for 2019. “We are going to see probably not as good a year as we had [last] year, but still a positive year that everybody we will be happy with,” Stolmar says, noting that 2018 set records for the company.

This was due to the combination of different industries enjoying growth at the same time, including the automotive and aerospace sectors. “That’s what helped us make it such an incredible year,” he says.

Ueltschi also believes that 2019 will be positive for the Cylindrical Division. “We have the capability to do turnkey systems and we have the ability to help customers solve difficult-to-grind problems,” he says.

UNITED GRINDING North America also will need to continue developing processes that clients can rely on to make them successful. “There’s a broad variety of machines available to various industries,” Ueltschi says. “In many areas for us, it continues to look pretty bright.”