As the economy began to recover from the Great Recession of the late 2000s, the companies that weathered the economic storm all began to ask the same question: How do we protect ourselves from the next downturn? For semi-trailer manufacturer Wabash National, the answer was diversification.

“Our CEO felt it was critical to grow in areas outside our core markets,” says Brent Yeagy, group president of the Commercial Trailer Products group. “We’ve done so through the acquisitions of the Walker and Brenner business in 2012 as well as the Beall acquisition in 2013. That allowed Wabash National to expand into the tank trailer market in the transportation space.”

Since its founding in 1985, Wabash National has been one of the leading producers of semi-trailers in North America, with more than 60,000 trailers manufactured last year. But by diversifying its business, the company has extended its reputation and innovation to the food and dairy, pharmaceuticals, chemical processing, and energy markets. “The vision from our CEO is to really drive to become a diversified industrial manufacturer,” Yeagy says. “Most people are surprised to know we are in many diverse markets beyond trailers and transportation.

“We’re taking a very disciplined approach to our expansion into markets that we currently serve as well as other adjacent markets that we feel would aid our diversification efforts and provide a solid foundation for earnings growth and overall revenue stability,” Yeagy adds.

Even as it works to broaden its business, Wabash National continues to dig deeper into the commercial trailer market to better serve customers with innovative solutions. The company’s list of customers includes many of the largest publicly traded carriers in North America, alongside medium and smaller carriers served by independent dealers.

Wabash National operates 12 manufacturing locations spread among the United States, England and Mexico. At 2 million square-feet and roughly 3,500 associates, its facility in Lafayette, Ind., is the company’s largest plant, capable of outputting as many as 250 van trailer units each day in addition to aftermarket parts, composite aerodynamic devices and miscellaneous transportation equipment.

Although it manufactures on a massive scale, nearly 100 percent of Wabash National’s trailers are custom-made to its customers’ specifications. That capability, coupled with the company’s commitment to service, has set Wabash National apart from competing trailer manufacturers. “[Our success has] been the ability to be the most innovative and customer-centric trailer manufacturer in the market,” Yeagy says. “I think we have, especially in the trailer space, really one of the most innovative brand names. We are known for our willingness to be in direct partnership with our customers. We listen to our customers and we want to work with them to bring solutions to the market.”

Wabash National goes beyond competitive pricing to supply a wide set of value-add components to its products. The company works with each customer to tailor delivery, determine the level of manufacturing performance and meet quality standards. That relationship continues even after the sale through product service supported by a dynamic indirect parts channel. Yeagy explains that Wabash National is at its best when it responds to the challenges affecting carrier customers. “Ultimately, I think the [Wabash] brand comes with a promise and belief that we are here to listen to our customers,” he says.

“Many of our direct salesforce have grown up within our organization,” he adds. “They deeply understand the needs and headwinds that face our customers. They’re able to interact at a level of detail  and operational understanding that allows them to bridge the customers’ needs with what we can provide from a solution standpoint.”

When a problem arises, customers such as K&B Transportation rely on Wabash National’s quick reaction time to provide relief. Recently, the Nebraska-based food product carrier ran into an issue where one of its shippers had a unique dock configuration that was damaging K&B Transportation’s trailers. The angle of the dock, dock lock and dock height were causing the dock to strike the fantail as drivers pulled in.

Even though it was not a design flaw on Wabash National’s part, the company flew a team of engineers out to K&B Transportation within 24 hours to assess the situation and validate tests. A few days later, Wabash National began production on custom parts to retrofit the trailers to work with the shipper’s dock.

Wabash National’s technical expertise has enabled the company to continually enhance its product offerings and the trucking industry as a whole. The company is preparing to unveil its next advancement – a prototype molded structural composite refrigerated van – at the Technology and Maintenance Council (TMC) exhibition in Nashville in February and March. Although trailer manufacturers have been using composites in various forms for several years, Wabash National’s prototype refrigerated van, and a new dry truck body with a structural composite base, will represent the next evolution of the materials. 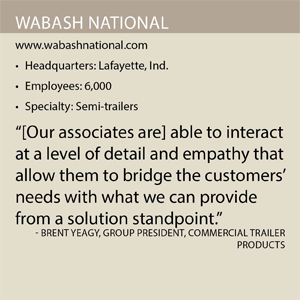 The company is replacing the steel and steel structural members in the base of the trailers with lighter-weight, corrosion-resistant composites that meet high strength, high fatigue requirements. Yeagy says the prototype represents a breakthrough in terms of weight, fuel efficiency and overall strength of the trailer.

The company’s commitment to innovation begins with its investments in manufacturing. Wabash National’s Lafayette facility is the only domestic plant with an extrusion process capable of producing DuraPlate composite panels used as the sidewall in dry van trailers, truck bodies and a number of other products. Over the last two years, the company has also invested in a state-of-the-art sidewall adhesive bonding process for dry van and truck body manufacturing. Further, Wabash National continues to enhance quality through higher levels of automation and vision control systems in its suspension assembly process.

Adding more capability is only part of Wabash National’s manufacturing initiatives. The company  matches its innovative products with a lean manufacturing philosophy and culture instituted by CEO Richard J. Giromini in 2002 that has helped it to remain efficient even as production grows. The Lafayette plant, for example, has five major trailer and truck body assembly lines.

Instead of manufacturing the parts for assembly at other facilities and then shipping them to Lafayette, Wabash National uses decoupled lineside subassemblies to produce components alongside, but independent from the trailers. It’s a highly complex manufacturing system, but one that allows Wabash National to better meet carriers’ custom specification while maintaining production speed. “We utilize a very lean line strategy map to minimize work-in-process and drive overall manufacturing system responsiveness,” Yeagy explains.

Wabash National continues to refine its lean manufacturing processes through employee engagement and support for continuous improvement. “We have a highly aggressive kaizen event process that includes all associates,” Yeagy says. The continuous improvement initiative has yielded results for the company. In 2015, the Lafayette plant increased its total throughput by more than 20 percent while maintaining in excess of 98.8 percent schedule of attainment – all without additional headcount.

To ensure that every product meets custom specifications, Wabash National follows a philosophy it calls “House of Quality.” Yeagy describes it as an overlapping set of controls that includes hard gates of inspection on the shop floor, postproduction evaluation, and incoming inspection and vendor quality review. The Lafayette facility is ISO 9001 and 14001 certified, but Wabash National’s quality process is even more stringent. “The systems that we are using today have grown beyond the basic [ISO] 9001 format into something we feel is a much more result-oriented quality system,” Yeagy says.

Wabash National follows up that front-line quality control with extensive post-sale support. The company works with a third-party supplier, Aurora Parts & Accessories, to provide aftermarket parts distribution for its dry van, refrigerated trailers and platform trailers. “We feel that they provide world-class services specifically through effective use of IT solutions to allow our customers to get the most effective and complete aftermarket service in the industry,” Yeagy explains.

The collaboration between Wabash National and its customers is about more than meeting custom specifications. The company has an internal team with dedicated engineering resources to help its customers understand specific applications throughout its products’ lifecycles. Many customers have their own service departments. Wabash National provides those departments with industry training so customers can better learn how to maintain and utilize their trailers.

When Giromini changed the company’s philosophy to embrace diversification and lean manufacturing, it set Wabash National on the path of world-class performance, Yeagy says. Associates enabled that process through “their ability to accept the philosophy changes that our CEO brought to the company, and their willingness to change to grow the business and to also innovate in what they do,” he adds. Yeagy also credits associates with supporting the company’s drive to be community leaders by supporting local and national organizations such as the United Way.

The benefits of Wabash National’s new mindset are realized in the products it develops for the future. As companies around the world are grappling with how to best apply ”big data” analytics, Wabash National is creating the hardware systems that will make it possible. Yeagy says much of the industry’s current discussion around telematic solutions deals with in-cab products, but Wabash already has sensors that can feed data on suspension and undercarriage operational management, enhanced security and conditional monitoring.

Turning that raw data into actionable information is still a few years off, however. “Fleets are inundated with information today, more than they can process and make decisions with. That needs to be simplified,” Yeagy says. For that to happen, he says the software side still needs to mature to the point where customers will find the value in such systems.

Once the software catches up, Wabash National promises to remain at the forefront of carrier innovation. “Wabash National is poised and ready to deploy when the industry is ready,” Yeagy says.