Skip to content
You are here:Home » Wieber Machine
Aerospace Packaging 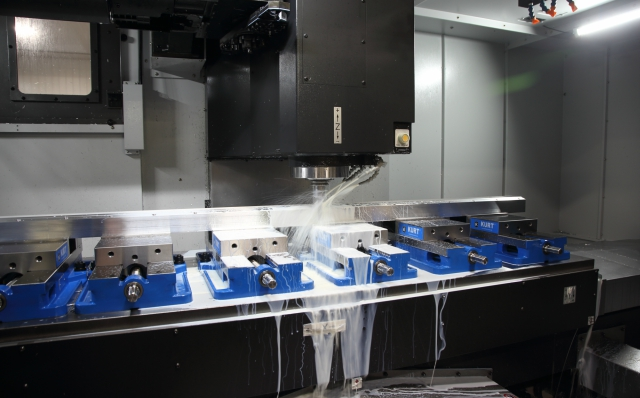 Dennis Wieber has always been an entrepreneur. He had a paper route at 11 years old and started his own snowplow business as a teenager. In his early 20s, he got into the machining trade and realized he could turn it into a career. “I thought it’d be cool to have a machine shop someday, but I didn’t know how to get there,” he says.

Wieber decided to go back to school and finish his business degree while continuing to work as a machinist. At school, his management professor saw his entrepreneurial spirit and helped him write a business plan to start his own shop. Eight banks rejected his application for a business loan to purchase a Doosan DNM500 before one finally said yes. The rest of the startup costs was covered with his own savings and money borrowed from friends and family. “At 29 years old, I cashed in my retirement and went for it,” Wieber says. “My heart was in it. I was all in.”

Wieber Machine made its first part on Jan. 3, 2011. At the time, Wieber supplemented his income by teaching night school at a nearby community college. But, at eight months in, he decided to drop the teaching position he had for three years and purchased a second machine.

That’s when things truly got scary. Wieber no longer had a fallback so he had no choice but to make the new business work. To keep costs down, he didn’t hire any employees and packed two machines into a 400-square-foot corner he rented from a larger manufacturing shop. By the end of 2012, Wieber Machine had grown enough to move into its own 2,500 square feet and in spring 2013 the company finally hired its first full-time employee.

Demand began to ramp up and Wieber Machine soon added two more CNC machines and grew to five full-time workers. In 2015, it moved into a 12,000-square-foot facility in Green Bay, Wis., and added its 13th full-timer. Today, the company has two shifts and operates 24 hours a day, six days a week, with a part-time workforce that helps to cover weekends.

Keeping the machines in continuous operation enables Wieber Machine to get the most from its equipment. “That’s been a challenge for us since day one, being under-capitalized,” Wieber says. “I’ve never had a big pool of money to pull from. We maximize our utilization by having operators run multiple machines and having staggered shifts running around the clock.”

The strategy has helped Wieber Machine compete with larger machine shops and its capacity is only growing. The company installed a seventh CNC machine, a Doosan DNM750L, in October and has purchased a eighth machine, with plans to add two more. To make space for the equipment, Wieber Machine recently rearranged its shop floor and installed new LED light fixtures to better illuminate work areas.

The company also reclaimed more of the space within its building. When Wieber Machine moved into its current facility in 2015, it rented about 7,000 square feet of excess space to other tenants. However, as the company has grown, it has absorbed more of those bays and is now using the entirety of the 12,000-square-foot building for itself.

Additionally, there are five acres of adjacent land that it can expand on when the need arises. “I’m pleased that within two-and-a-half years we’ve been able to utilize the entire building, but [in 2018] we’re going to look at long-term expansion and what we’re going to do with the land next to us,” Wieber says.

The added capacity has opened up new opportunities for Wieber Machine. “Every month we’re making a first-time delivery to a new account,” Wieber says, noting the company is on pace for a 42 percent increase in revenue in 2017. “If you’re not growing you’re dying.”

Core Competencies
As Wieber Machine reaches more customers and expands its capacity, more is being asked of the company. “Our core competency is milling and turning and we do the light fabricating and assembly as value-added [services],” Wieber says.

Future additions could include water jet and laser technologies – both processes it currently must contract out. The company will have water jet capabilities in house by first-quarter 2018, which will enable it to expand its service offerings and take on new kinds of projects. “We’re not looking to become a one-stop shop, but the customers are pushing us to diversify our offerings a little bit,” Wieber explains.

Wieber sees those value-added services as a way to build mutually beneficial relationships with clients. “We tend to partner with customers that want us to succeed and vice versa,” he says.

Those customer partnerships cover a range of industries. Wieber Machine works for suppliers and smaller OEMs in the oil, nuclear, gas, military, paper, packaging, food and aerospace industries. Much of Wieber Machine’s work includes shafting, bearings and rollers, but it also produces fixtures and tools. For defense contractors, Wieber Machine makes brackets and bushings while it manufactures components for sampling equipment, valve bodies, pistons and cylinders for the nuclear, oil and gas markets.

Those industries require strict precision and high-quality components, which Wieber Machine delivers by following ISO and International Traffic in Arms Regulations (ITAR). The company expects to achieve ISO and ITAR certification in 2018 and may eventually pursue AS 9001 certification. 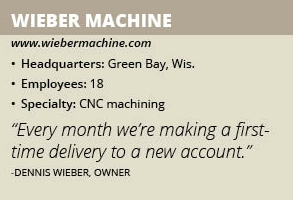 Meeting those standards will create opportunities for Wieber to work with even more customers. “Right now, we’re happy being second tier,” Wieber says, “but eventually we’ll want to be first tier with some of these companies.”

About 60 percent of its work is stainless steel, 20 percent tool steel and exotics and the remaining 20 percent is plastic, aluminum and mild steel parts. One-third of Wieber Machine’s output is contract work and the rest is custom parts. Nothing is outsourced to other machine shops. “If we take on a job and we say we’re doing it, we are doing it,” Wieber affirms.

Most of Wieber’s work has been short run, niche production. However, as it has increased it capabilities, customers have begun asking for more volume. Some components have production runs of 1,000 parts a month while Wieber Machine might produce only 15 of another item. “We don’t say no,” Wieber says. “We can accommodate the production stuff as well.”

Typical lead-time is 10 working days, but the company also offers same-day production to local assembly houses and manufacturing plants that need a replacement component right away before the next shift begins. Wieber calls it “cardiac service.”

While other machine shops might leverage the customer’s immediate need to negotiate higher prices and larger profit margins, Wieber doesn’t want to take advantage of a desperate situation. For so-called cardiac service, the only extra charge a customer will see is if Wieber Machine has to interrupt an in-progress production run to break down its CNC machines to accommodate the rush job.

If it can be slid between two other runs, the company will charge its standard shop rate. “It can be a challenge with the schedule sometimes,” Wieber says. “But ultimately, we try to be a partner to our customers. If you want to be a partner you don’t exploit them.”

Developing Employees
Becoming a top-tier machine shop takes more than modern equipment – it requires skilled and knowledgeable employees. “The secret sauce in Wieber Machine is the crew,” Wieber says. “There are companies out there that have money behind them – bigger bank accounts, they have bigger, better equipment than we have. But I have one of the most talented crews in northeast Wisconsin.”

The company rewards its employees well for their work, offering full benefits, paid vacations and holidays, a 401(k) and profit sharing. A few times a year, Wieber even breaks out a grill and barbecues for his workers. “I’m a marginal boss but a decent cook,” he jokes.

Wieber Machine prides itself on being an employee-focused organization. The goal, Wieber explains, is to train the employees up so that they have the skills to leave, but to treat them well so they won’t. “Right now I know every employee,” he says. “I know their spouses, I know their children. Once we start losing that is when I’m going to question, ‘Do we keep growing or do we maintain?’”

Wieber’s confidence in his employees begins with their educational backgrounds. Nearly every machinist has completed a machining program at Northeast Wisconsin Technical College, the school where Wieber developed his own skills and taught CNC milling and turning for three years.

Once they are within the company, Wieber is interested in seeing how they develop. Every employee goes through a review after their first six months on the job, during which Wieber questions them on their goals and aspirations. He then tries to find ways to help them follow those ambitions. If a machinist wants to learn CNC programing, for example, Wieber sets them up with a training program for Mastercam software.

Eventually, Wieber hopes to roll out a tuition reimbursement program that will further incentivize employees to elevate their skills. “I’ve worked at companies where I was held back because I was really good at what I did,” Wieber says. “I don’t want that type of culture. If an employee wants to advance, I’m going to give them the tools they need.”

Trust in Future
As his namesake company has grown, Wieber has had to delegate more of his responsibilities. When it was just a one-man operation, he did all the machining, sales, bookkeeping and every part of the business. But with a complete workforce to manage, he can’t afford to be as hands-on. Wieber hasn’t touched a machine in three years. “Now my primary focus is sales, business development and the vision,” he says, “which is where I need to be as an owner.”

That transition hasn’t been easy, but it was necessary for Wieber Machine’s growth. “It was a challenge removing myself from the day-to-day grind, but I know I have a crew I can trust,” Wieber says. “One fortunate thing about building this from the ground up was I was able to build processes and procedures and get people into them as I handed off jobs and responsibilities.”

Since he’s no longer involved in the actual production, Wieber made sure his company has stringent quality checks and audit systems to catch any defects before parts are sent to customers. As a result, Wieber Machine’s defect to customer rate is 0.02 percent.

With effective processes in place and a group of skilled employees, Wieber can focus on the future of the company. He’s in the early stages of planning a 30,000 to 50,000 square foot expansion and is exploring ways to increase Wieber Machine’s work envelope and capabilities. “I haven’t quite had it all mapped out yet,” he says, “but with the opportunities out there in manufacturing today, I can’t say no and I can’t stop.