Skip to content
You are here:Home » Zerhusen Kartonagen’s 35-year history of organic and monumental growth, in every direction 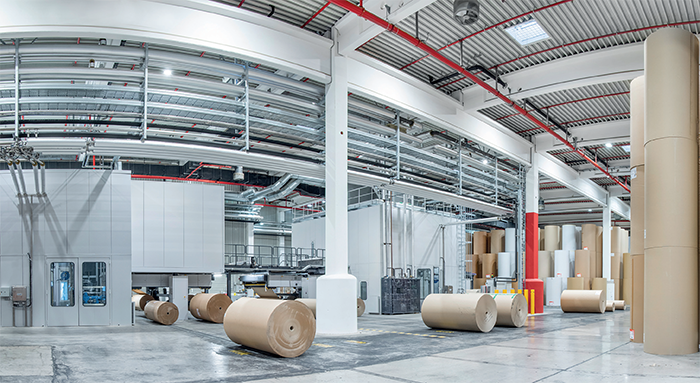 The ladder of growth that Zerhusen Kartonagen (Zerhusen) has climbed, since the breaking of ground at its first site in 1986, is as natural as its mainstay product’s original form. Over the last 35 years, the family-owned company has progressed from a merchant to processor, and now, manufacturer, making its way, step-by-step in the corrugated cardboard industry. It was founded by Günter Zerhusen on 1st January 1987 in Damme, Germany – with nothing more than a tight-knit team of three people and an 1800-square-meter operations hall. From these humble beginnings, the current enterprise now employs 675 people, and this year, has generated €175 million.

From its earliest days, themes of innovation and constant expansion have threaded through its story. Within its first five years, whilst operating as a merchant, the company built a further three halls, a workshop, a dispatch center with an ever-growing fleet of vehicles and vastly expanded its workforce. During this period, Zerhusen also started to implement its own form of processing. The company was able to obtain large-format, corrugated cardboard from other businesses for free, in the form of return boxes or goods from insolvency estates that would otherwise go to waste. It would then cut these down using a bandsaw and sell them on for a profit – proving to be a very lucrative addition to the model. 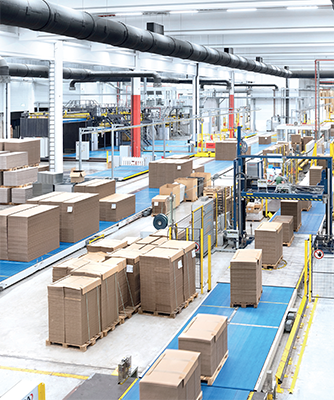 Major evolutions
In 1993, Zerhusen purchased its first large-scale processing machine, which marked its progression into a processor. From this point onwards, the company started buying in raw corrugated cardboard that it could process into finished packaging and, due to the existing customer base, it was able to go straight into production. The following decade saw further growth and reinvestment in the forms of two more production lines, an entire product-development department, three more operations halls, a vast range of new equipment and even an early recycling initiative. The purchase of a new Paal paper press allowed the company to reuse what would otherwise have been disposed of as paper waste – around 300 tons per month. This waste, which is a byproduct of the production of finished packaging from corrugated carboard, could now be repressed into corrugated raw material and used again.

The final milestone came 13 years later, when Zerhusen climbed the next step and became a manufacturer. 2016 was a significant year, despite the numerous other extensions, technological advancements, and construction of the fully automated high-bay warehouse that preceded it. It marks the implementation of the company’s initial corrugated board format plant, a 17,000-square-meter structure that cost around €33 million. Within its first month of operation, the team was achieving around 250,000 square meters of corrugated cardboard per day. Although impressive, this pales in comparison to the company’s output capabilities today. Zerhusen’s contemporary product range features a succinct collection of services: the production and processing of corrugated board, the development of packaging designs, quality management, warehousing and transport and logistics.

Welcome ‘Vicky’
In speaking to Robert Zerhusen, Production Director of Corrugators, he explains: “Our processing plant has continued to grow in recent times. This has been a necessity, on account of the extreme pressure that our initial corrugator has been under during the last couple of years. We’ve been required to implement weekend shifts and overtime in order to keep up with the demand for corrugated cardboard. This has placed a great deal of stress on both our machines and our employees and doesn’t fit in with our working culture. So, we made the decision to order our second corrugator, ‘Vicky,’ in March 2021. It’s a Speedline from BHS Corrugated with a maximum speed of 450 meters-per-minute, which has enabled us to guarantee greater production capacity. Besides the additional features the newer model carries, its implementation means that overall, theoretically, we can now produce 500 million square meters of corrugated cardboard.”

Family focus
The second corrugator only represents a fraction of the €100 million, five-year investment plan that started in 2018. It has also seen the construction of a second high-bay warehouse in 2019, a new development center in 2020 and another projected plant for 2023. Due to its physical size, technical equipment and processing volume, Zerhusen is now in the top three largest corrugated board plants in Germany, but that doesn’t mean it’s lost any emphasis on the importance of its people. Linda Stärk, Commercial Manager, says: “Our main goal as a company, is to provide a stable working environment for our employees. We want them to be happy when they come to work, as we want our suppliers and customers to be happy to work alongside us. It takes something a little more special to survive in today’s competitive market.

“For us, the employees are the heart of our company. We are a family-owned business and vow to keep it that way,” Linda continues. “Even if we have over 650 employees, we still try to maintain the family spirit in our daily working lives. Communication is key and it works both ways, we must listen to our team members in order to understand their ways of working or hear the improvements or new ideas they bring to the table. We try to ensure that everyone has an opportunity to lead across our different programs, to give people a chance to develop themselves further. Beyond this, we offer a number of financial benefits and support systems for our teams, complemented by the company events that we host to strengthen our team morale and family spirit.” 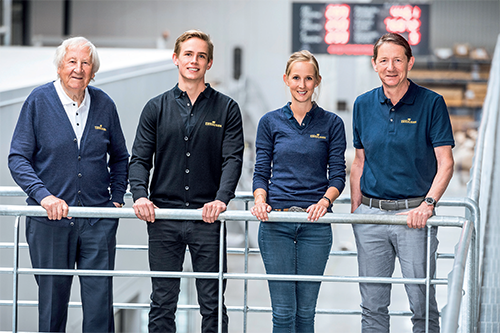 In terms of supply chain working relationships, Roland Zerhusen, Chief Executive Officer, says: “We place the utmost importance on our supplier relationships. We believe in long-term relationships as they bring the continuity that we require from our vendors – but we understand it’s a two-way street. We are always keen to continue working with the same people, especially when it comes to sales consultants, and we vie to grow alongside our partnered companies as we do our customers. It’s all centered around being a family company, which empowers us to concentrate on our practices in manufacturing, production and logistics.”

New site
Back in October, the team-family was bonded closer together by working towards and achieving a world record – which has subsequently been broken. Within an eight-hour shift, the team managed to produce 196,299 meters of corrugated cardboard. This then-record-breaking run on ‘Vicky,’ the 2.8-meter-wide corrugator, had no downtime and managed to maintain an average speed of 408 meters per minute, as well as a top speed of 452 meters per minute. A total of 545,933 square meters were produced, a surface area equivalent to that of 70 football fields, using 195 tons of containerboard.

The nature of corrugated cardboard, in terms of its production, processing and recyclability, is inherently environmentally friendly, and Zerhusen champions this great potential for sustainability by ensuring that its own green initiatives are in check. The company cites water and paper consumption as being two of its larger obstacles, which it is tackling with recycling, and since the beginning of this year, the entire plant has been sourcing its electricity from renewable sources. Linda details further: “For our company, sustainability is very important. We sell a sustainable product – the corrugated cardboard market is growing and replacing plastics more and more and we also have an energy management team. Their day-to-day responsibilities involve continued plant analysis and ongoing technical improvements. Ultimately, to save us as much energy as possible and reduce our carbon footprint.”

With regard to the company’s history, it comes as no surprise that the future for Zerhusen includes further growth. As Roland states: “The €100 million investment plan started with the purchase of our second corrugator and will finish with the completion of our new processing plant in Niedersachsenpark in Summer 2023.” This new site will offer the business new opportunities for expansion and, according to Roland, in time will be developed to also house a complete corrugated board plant with another high-bay warehouse. The family spirit and ethos towards good, honest work has propelled Zerhusen thus far and is showing no signs of stopping any time soon.
www.zerhusen.de