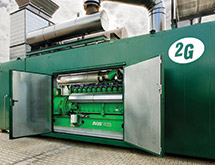 When Hurricane Sandy hit the  East Coast in 2012, electrical power was cut off for days. In circumstances like those, the smart company will generate its own electricity. Rising electricity costs make self-generation even more attractive. Now add to that the benefits of cogeneration – in which the heat produced by electrical generation is captured and turned into useful heat to increase the total system’s efficiency – and the argument for cogeneration is even stronger.

“The main benefit to CHP systems lies in their reliability and high efficency,” CEO Paul Glenister explains. “Traditional energy distribution through large power plants loses lots of energy in the process of physically generating the electricty, and more and more as it travels through the grid.” He estimates that only approximately 35 percent of the energy generated at a large power plant actually is received by customers.

“So-called cogeneration systems – which also are known as CHP systems – are installed onsite, at the place of the energy consumption,” he continues. “The special thing about CHP is that the waste heat that is produced by the engine while generating electricity is put to use instead of being released to the atmosphere. We realize this by capturing the engine’s waste heat from the engine jacket water that cools the engine and heats up in this process, and from the hot exhaust gas.”

Heat exchangers extract the heat on these two levels, and manufacturing plants can use the additional energy for their processes. Steam also can be produced instead of hot water, or other liquids used in a plant’s manufacturing processes – such as oil – can be heated. If there is a need for cooling, an absorption chiller can be incorporated into the system to use the heat to produce cold water or air.

Because CHP systems make extensive use of the heat produced during electrical generation, they can achieve overall efficiencies in excess of 91 percent at the point of use, 2G Cenergy calculates. Glenister estimates that with 2G’s CHP systems, a manufacturing plant’s energy costs can be reduced by an average of 40 percent. “The return on investment we see for our customers is an average of 12 percent or one to three years,” he says. “It depends on the electricity and gas prices (sparkspread), as well as any possible peak demand charges.”

Additionally, incentive programs may further improve the payback calculation. For example, the New York State Energy Research and Development Authority provides up to half the cost of installing a cogeneration system, and other states also have incentive programs.

Another advantage of CHP systems is lower emissions and independence from rising electricity prices. “Electricity prices are increasing,” Glenister notes. “Our parent company is a German-based company, and in Europe, electricity costs are already extremely high, which is why cogeneration is a common technology there. There is also a high demand for ‘green’ technology that provides sustainable solutions. A 2G CHP system lowers CO emissions by about 60 percent.” With the latest EPA requirements, the demand for sustainable energy production is increasing in the United States, as well.

It is really a mix of four main factors that make CHP so attractive: The high cost savings play a central role, but more and more businesses also want to gain independence from the utility grid and its increasing prices. “We talk to a lot of customers that say it gets harder and harder to forecast and have control over their electricity costs,” Glenister says. “The higher the electricity demand, the bigger their dilemma.” For manufacturing plants or critical applications such as hospitals or data centers, the high reliability is the key decision point.

“The U.S. electric grid is outdated, and the demand for electricity and grid extension is growing,” Glenister stresses. “As demand gets higher, we see more and more outages happen – often certain areas are hit and lose power for hours – that’s something that affects continuous manufacturing really badly. If they have an outage, it’s affecting their business and often causes high cost for them. If you look at the example we had in New York – which was hit by Hurricane Sandy – there were long power outages.”

Diesel generators were not able to supply power for as long as the outage lasted, Glenister maintains. “It’s extremely expensive to use diesel,” he declares. “It’s extremely unsustainable. Usually, it provides backup for a few hours, not for a week of an outage.”

2G Cenergy specializes in providing cogeneration systems that produce between 50 and 2,000 kilowatts of power. Higher system output can be reached by linking several systems together. They will all run in synchronization with each other and be operated with one master control panel.

CHP systems can operate with natural gas or various biogases as the fuel source. “We have a lot of projects where anaerobic digester systems supply biogas to our units installed at wastewater treatment plants, landfills or farming businesses,” Glenister notes. “For these cases, we integrate gas-cleaning solutions in our system to upgrade the quality of the biogas, if needed. Natural gas is a great and uncomplicated fuel source that is successful for a wide variety of applications.”

CHP systems usually run in parallel with a utility’s grid or can be installed in island mode. “There will always be short downtime on these systems when they need maintenance, for example, an oil change or scheduled overhauls on the engines,” Glenister says. “In these cases, the utility grid serves as the backup.”

As a solutions provider, 2G adjusts each system to the customer’s needs. In general, the system size is based on the thermal demand of a facility, because only a full utilization of the thermal output unfolds the massive benefits of cogeneration.

“Some CHP systems are set up to provide the base electrical demand of the system, so they may pull power from the grid not only during maintenance but also during periods of peak demand,” Glenister says. “In other projects, we produce more electricity than the facility demands, and this excess energy can be sold back to the utilities and actually generate further income.”

“The huge advantage of our system, compared to traditional engineered systems, is that we manufacture, commission and service the whole system with all its components,” Glenister continues. “We see projects that are engineered by an engineering company that use all kinds of components from different vendors. So when there is a problem, you need to get the warranty and the service from different vendors, which often leads to a lot of problems and delays. Our systems are serviced by us. We take care of all the warranties, and our clients never have to deal with anyone but us.

“The commisioning engineer onsite will train the operator, usually in a few days, in simple servicing and how to operate and monitor the system,” Glenister says. “Our technicians can access the system remotely and will get alerted if there is a problem. Most little things can be fixed through this remote access and the operator onsite. If there really is a problem that requires one of our specialists, they will be onsite to service the unit within 24 hours.”

“There is great potential for CHP in the U.S. market,” Glenister insists. “We say we are in the beginning. The market is not saturated at all. It is a market that is just picking up; we’re in the stage of early innovators.”

In Europe, even single-family homes have cogeneration systems. “That’s how common the whole technology is there,” Glenister says. “But the U.S. market is about to change. With increasing electricity prices and stricter emission guidelines, we see a huge, growing market, without a doubt.”

2G Cenergy’s niche is CHP. “A lot of our competitors offer several technologies, but we specialize in CHP,” Glenister emphasizes. “We’ve never done anything else. We have our own engine line. We have a big R&D department in Germany, and they continiously improve the engines to get even higher efficiencies. Our systems are different than all other cogeneration systems.

“In the United States, we’ve often seen a standard cogeneration system that an engineering company or a consulting company installs,” Glenister says. “They buy the components seperately and engineer the system onsite. In practice, we see difficulties with the quality of these systems. The art lies in gearing all components perfectly to each other – only then can the highest efficiencies be reached. Our system is a modular, containerized unit. Everything is in there – all the components proven to work together get facility-tested onsite. When we do a design, it just needs to be interconnected with the building and can be commissioned. So there is no upfront engineering required.

“That’s how we avoid problems we see often in traditional engineered CHP projects,” he declares.

“There are often extensive delays, because so many parties are involved and components have never been tested with each other,” Glenister adds. “So these projects often are taking longer and get more costly than first anticipated. Our customers appreciate the low risk that the implemetation of a 2G system brings. After all, we guarantee an uptime for the system of 92 percent.”

2G Cenergy’s R&D efforts have created an innovative engine. “One of our biggest innovations is our own engine line, the Agenitor,” Glenister says. “It is based on a MAN engine manufactured in Austria that is stripped down to the block, and then rebuilt with 2G cylinder heads, cylinder linings and a 2G control system. That way, we increase the electrical efficiency by 3 to 4 percent and reach overall efficiencies of more than 90 percent.”

2G’s cogeneration systems are manufactured in its plant in St. Augustine, Fla. “German engineering manufactured in the U.S.,” Glenister says. “We assemble the whole system in the U.S. plus add in components that we get directly here from vendors. So the engine technology behind it is German, and the packaging and the manufacturing is in the U.S.”

2G Cenergy was founded in Germany in 1995 by Christian Grotholt and Ludger Gausling, whose last names were the foundation of the company’s name “2G.” Over the years, however, the company’s name more and more reflected the nature of the products sold – the combined generation and transformation of energy into electricity and heat. The U.S. company was founded in 2009 and since then has grown rapidly.

Glenister attributes the company’s success to its technology and the high quality of its products. “It’s an exceptionally good product, especially compared to everthing else that is on the market,” Glenister insists. “It was an incredible success in Germany. They grew within a short amount of years to a huge company. 2G was started out of a garage by two engineers, but it’s just the quality of the product and also the concept of building it modularized to have it ready for use as a plug-and-play.

“The whole 2G team takes a huge pride in our product, and we will continue to work hard on sharing the success with the U.S. market,” Glenister  concludes.