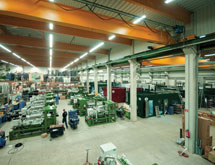 For 2G Cenergy USA, there is a better way to produce power. The company’s combined heat and power (CHP) cogeneration technology produces heat and power together, delivering added efficiency.

“It’s basically energy production in one joint unit producing electricity and thermal energy all in one decentralized power plant located where the energy is needed,” President Michael Turwitt explains.

2G Cenergy specializes in decentralized energy modules that can be installed wherever energy is needed. This type of technology has been applied in Europe for many years and is also extremely successfully in Japan.

At most North American conventional power plants in use today, however, only about 33 percent of primary energy is turned into usable electricity. The remaining 67 percent is wasted. “Most people are not aware of this,” Turwitt says, adding that this is “very antiquated and very inefficient.”

In North America, efficiency had been neglected for decades as a result of low energy costs. However, the increasing popularity of sustainable energy programs has led to renewed focus on improving efficiencies. “It has helped a lot,” Turwitt says. “People are much more interested to learn about energy efficiencies. It is a clear trend in all industries throughout the NAFTA region. Everyone is much more interested in saving on energy costs to be more modern, efficient and responsible.

“This trend has helped us move to introduce our product in these markets faster,” he continues. “We are penetrating the market quickly. Like a snowball rolling down a hill, we are getting bigger and bigger and we haven’t even scratched the surface yet.”

A total of 40 percent of newly installed American biogas plants employ 2G Cenergy technology. For natural gas installations, the company’s marketshare is approximately 5 percent of installations, with a goal of reaching 20 percent in the next three years.

2G Cenergy opened its St. Augustine, Fla. facility a few years earlier than it had originally planned to capitalize on increasing demand. The manufacturing facility currently employs 70 people and will eventually employ at least 120 specialists in manufacturing advanced cogeneration systems.

The plant opening “went very well,” Turwitt says, with local governments and the community thrilled at the investment that will boost the regional economy.

Helping 2G Cenergy is a White House directive calling on all 50 states to reach 45 gigawatts of total CHP power by 2020. “The most important thing is that the U.S. is now on a path of energy efficiency,” Turwitt says. “This is a much more important thing today as compared to years ago. It helps not only us, but the entire power generation industry look into ways and means of coming up with technology to help the American consumer be more energy efficient.”

Owners of factories and other large buildings eager for energy savings are among 2G Cenergy’s largest customers. “It’s a big surprise to them to learn they can easily save up to 40 percent of their energy costs with this technology,” Turwitt says. “We have customers saving thousands and thousands of dollars per month because of this technology.” CHP also has applications in the agriculture, wastewater treatment and hospital sectors.

“Current trends of growth help us tremendously,” Turwitt says. “In general, this is extremely important for the U.S. economy. Clean and intelligent production is creating a new industry. In Europe, clean and renewable energy sectors created more than 250,000 new jobs during the past 10 years, and this is now happening in the United States.”