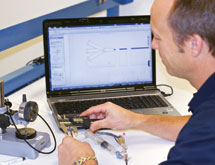 With its origins in the design of medical devices for manufacturers throughout the United States and Asia, it should come as no surprise that Access Point Technologies (APT) is thriving as a manufacturer of its own devices in today’s competitive market. After restructuring its operations in 2003, the company now manufactures its own product line and designs devices for clients throughout the world.

“We focus on both creating our own devices and helping other companies develop and manufacture their devices,” CEO Steve Berhow says. “We are very good at rapidly getting other companies’ product designs through development and to market.”

APT originally began operations in 2000, focusing on design work for companies in Asia and the United States. From 2000 to 2003, Berhow and his partner, Michael Cheng, began exploring developing devices for APT. The partners restructured operations, retaining its U.S. division in Rogers, Minn., and adding manufacturing facilities in China.

Today, APT has two world-class medical manufacturing facilities and sales offices throughout China, as well as an additional sales office in Japan that caters to the Pacific Rim.

According to Berhow, he and Cheng weren’t content with merely penetrating the electrophysiology (EP) catheter market. The partners wanted to make sure their company offered the best products in this segment of the market. They wanted to make high-quality devices that any physician would be confident to use.

With their combined experience with these technologies, they have been able to create a line of EP devices that will compete in the global market. Berhow has extensive experience in making catheter-based medical devices, and Cheng has sold EP catheters in the Chinese marketplace while working with nitinol-based products, as well.

“We wanted to create a line of devices that were as good or better than products currently on the market,” Berhow says. “EP catheters are very labor-intensive. Together, we were able to create designs that took advantage of various unique catheter-building techniques, engineering and equipment from APT-U.S.”

Berhow also explains that manufacturing in China allows APT-U.S. to add a number of labor-intensive improvements to its designs while maintaining competitive price points for its devices.

In 2005, the company launched a line of EP catheters in the Chinese market before moving into the European market and beyond. Berhow says the company had 20 percent market share in China as of 2011, and it recently received its CE mark to sell its products in Europe starting in the second quarter of 2012.

“The combination of strong engineering in the United States and China, along with the ability to put a lot of labor into our devices has allowed us to both improve current market designs and make new devices in our core areas,” Berhow adds.

This combination also is a boon for APT’s clients, for whom it continues to design and engineer medical devices. The company can manufacture the products it designs for a third party, or it releases the designs themselves to its manufacturing clients. This accounts for approximately one-third of the company’s business.

“On our design and development side, we do very well helping other companies or groups of entrepreneurs get their ideas through development and into human clinical,” Berhow says. “In some cases, we then retain the manufacturing for such companies. In other cases, we transfer the technology to make the devices back to the company.”

This flexibility makes APT more attractive to some of the biggest companies in the business. “We take pride in the fact that the majority of our projects come from word-of-mouth by others that we have already worked with,” Berhow says.

Of course, it doesn’t hurt to manufacture products of the highest quality for an incredibly discerning client base. Physicians around the world also are loyal to APT’s products.

“Although we are small in the realm of medical device companies, we are constantly being praised by the doctors using our devices for the quality and ingenuity built into them,” Berhow adds.