Back to Profile Gallery > Aceros Otero 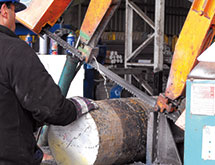 Anyone who knows the mining-metallurgical world in the southern tip of Latin America probably has heard the name Aceros Otero.

The company has been in business for more than 30 years in Chile, where it stands out for the high-quality services it offers to industrial companies in various sectors, such as mining, forestry, fishing, construction and metal-mechanics. Created within Holding Otero, it is still functioning as a family business and has succeeded in becoming one of the country’s most important strategic providers.

The company’s catalog includes rust-free steel, sheet metal cut-to-size, machinery, tools and other industrial supplies. “We try to offer our clients the most comprehensive services possible, and I think that’s one of our biggest advantages over the competition,” General Manager Patricia Otero Francia comments.

The company’s advantages cover other aspects as well. For example, in a country of Chile’s dimensions, it is necessary to be present in every different geographical region.

At this time, Acero Otero has branches, offices and shops in three locations from Santiago, to Viña del Mar and all the way to Antofagasta in the northern mining pole, covering approximately 2,800 kilometers in distance.

The placement is strategic because it allows the company to respond much quicker to the needs of clients, whom the company hopes to serve with tailored solutions and with the highest efficiency.

“Another one of our advantages is that we keep products in stock, such as quality tools imported from the United States, as well as the representation of important world-renowned steel brands. We have made them accessible to the entire country,” adds Otero. The general manager also notes that the company does not discriminate in its sales and attention toward diverse types of clients.

“We sell to large, medium and small businesses, from items that may cost one dollar to one that is valued at a million dollars, and that is one of our strengths,” she says.

The company has invested in the adoption of advanced technology and the digitalization of its processes, with the intention of meeting clients’ needs more efficiently. This has resulted in an absolute benefit compared to other providers around the world.

One more factor of the company’s excellent management is its qualified and committed personnel. As an employer, Aceros Otero takes an active role in the training and coaching of its workers. Any of the employees can sign up during his first year of work for an improvement program that supports the company.

In fact, 10 percent of the personnel who work with the company are also studying in some type of vocational or technical school or university. In this way, the company tries to facilitate the tools that will allow its people to advance in their careers.

With a solid position in the Chilean market, Aceros Otero has been working for a long time to extend its reach to other countries. In fact, its modes of expansion have begun with the opening of an office in neighboring Peru, where the company already has a number of clients and continues initiatives to become more well-known. The strategy is to begin with nearby markets and those that are economically and culturally similar.

“Of course, we want to reach other economies, for example Colombia, but we are heading from South to North,” Otero notes. According to Patricia Otero, the success of Aceros Otero is founded, and will continue, on predetermined basic pillars, “which are our clients, our personnel and our collaborators. We always try to be very respectful toward our stakeholders.”