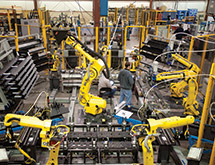 When Acieta LLC provides equipment, it doesn’t merely drop a ready-made product in the client’s lap. Its associates ensure that the product meets the customer’s exact needs. “They will really think outside the box to come up with an automation solution that will not only try to attain what you’re trying to get from your RFQ, but exceed it,” COO and Chief Technology Officer Bob Goossens says.

This has led to benefits such as improved productivity for Acieta’s customers. “They go beyond just ordinary, simplistic automation designs,” he says. “It’s not so much about the technology, but the people behind it that can really sit down and work with you on developing a solution that’s exactly what you need.”

In 2005, it became Ellison Technologies Automation because of its relationship with distributor Ellison Technologies. Today, as Acieta, the company has the ability to work with any machine tool company in the market and has completed more than 4,000 robotic system installs throughout North America.

Its customers have ranged from small job shops to major manufacturers as John Deere and Harley-Davidson. Goossens adds that Acieta worked closely with the famed motorcycle company on a solution that matched its specific needs.

Although Harley approached Acieta about a conveyor system, the company was able to meet its needs with automation as well. “They may say the conveyor system is the solution, but we might come back and suggest a different type of system as well,” he says.

Some customers need to be convinced of the benefits of robotic systems, a task which Acieta is well prepared for, Regional Automation Manager Dan Alexander says. During the sales process, “We show them examples of financial improvement and returns on investment,” he says.

The company also teaches clients on how automation allows them to shift their staff’s focus to more value-added processes. Thanks to this shift, “Your throughput goes up, and your employee morale goes up,” Alexander says.

Some might be afraid that they don’t have the right experience to run the machines, but the company has them covered, Alexander says. “Acieta provides the proper tools and training so that going from a manual operation to an automated operation is a simple transition for operators,” he says.

Acieta also takes prospects to see its current clients’ operations. “We show them things we’ve done and we show them our commitment,” he says. “We stand behind what we do.”

Acieta’s products also can help its clients cope with a potential shortfall in skilled labor, Goossens says. “I’m hearing from some manufacturers that their pool of people is going to become less and less,” he says.

Although those manufacturers may find skilled labor, “You’re going to have to pay them more,” Goossens says. “Those people will jump ship to another company for a little bit more money.” Automation can help them avoid that problem, he says.

Acieta can boast a 95 percent on-time delivery rate maintained through strong project management, Goossens says. “You have to work closely with the customer and you have to be a team,” he states.

“For applications like this, everybody has to be accountable,” he explains, noting that this includes the client. “They have to really commit to the engagement.”

The company also focuses on staying current with new technology. Not only does Acieta keep track of what others are doing, “We’re looking at how do you apply the technology to support what manufacturers need,” Goossens says.

This is key in Acieta’s role as an integrator for FANUC America Corp. “If they’re coming out with a new technology, we’re tied in pretty close to [that],” he says. “We have access to that and visibility beforehand.”

Waves of the Future

Acieta recently worked with FANUC on one of its latest advancements: 3-D vision for bin-picking robots. This enables the robots to select components and parts from random assortments more easily and effectively than they could previously.

“The technology is getting more refined and more accurate,” Goossens says. Acieta has worked with FANUC on implementing 3-D capabilities on equipment.

Acieta also is developing collaborative robotics, where humans and robots work in the same space.

Unlike other systems, these machines feature sensors that sense when a human is nearby and adjust to make it a safer environment.

Although the company feels more work needs to be done in this area, “It’s always advancing,” Goossens says. “There’s more maturity that needs to take place in that area, but it’s definitely going to be the wave of the future.”

Acieta also generated a strong response with its products at the Automate 2015 show in Chicago this past March, he adds. “Some people saw [our lane cell system] as a potential solution for them,” he recalls.

Goossens predicts a strong future for Acieta. “We see continued growth in the automation industry,” he says, noting that more manufacturers will need to reduce cost per part and boost productivity. “It’s going to be more critical. We just want to help manufacturers deal with those issues.”

The company recently helped Waukesha Metal Products by automating a task normally done by hand. “They’re actually reducing their cost per part on that particular product,” he states. “They were able to increase their output by 30 percent.”

The company also may branch out into the oil and gas sector, Goossens adds. “We’ve actually deployed some solutions to help that market, but also there’s some development going on,” he says.

Acieta plans to continue to grow its operations, Alexander adds. Not only is it looking for engineers, “We’re looking to grow manufacturing in Wisconsin,” he says.

This will be achieved, Alexander says, by driving cost down, increasing throughput and improving quality so manufacturers can earn new business. “We help them achieve this through our automated solutions,” he says.