Back to Profile Gallery > Acme-McCrary Corp. 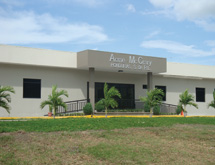 For more than 100 years, Acme-McCrary has been in the business of designing and manufacturing legwear and seamless garments to the highest standards of quality. CEO Neal Anderson says that even though the company has been a major player in the garment industry for more than a century, it has experienced its most significant growth in the past 10 years. By taking advantage of the best aspects of domestic and overseas manufacturing, Anderson says the company is in a good position to maintain its current growth rate well into the future.

The company is the result of a merger between two mills based in Asheboro, N.C., and it continues to be owned and operated by the original families who started those mills. Acme-McCrary’s output includes socks, hosiery and seamless bodywear. According to the company, it manufactures more than 1.3 million pairs of socks and 96,000 seamless garments per week. “A great deal of our growth came about through acquisitions,” Anderson explains.

Today, Acme-McCrary counts among its customers some of the biggest retailers in North America. The company mostly produces private-label products, but it does produce some branded products, as well. Anderson says the best-known and biggest brand Acme-McCrary manufactures for is the Spanx line of seamless undergarments.

“Because we’re in the United States, we can do quick turns,” Anderson explains.

Although many manufacturers moved their operations to China to take advantage of lower production costs, Anderson says they have discovered that the cost of doing business in China is beginning to eat away at their margins. For example, as retailers demand shorter lead times because they are keeping products on shelves for shorter periods of time, the time it takes to import products from China becomes a bigger problem. Also, retailers are discovering that quality control is less of an issue when production facilities are closer to home.

Acme-McCrary opened its first production facility outside of the United States in Honduras about 10 years ago, and Anderson says although this provides the company with some cost advantages, it can’t take the place of American production entirely. The company’s Honduras facility provides a majority of the sewing and finishing work it needs, but all of the company’s knitting work remains in the United States. This is because the infrastructure in Honduras is not capable of supporting the equipment required for knitting, Anderson explains, and there is a lack of technical expertise in the labor force.

Because of the economy, retailers are demanding more of manufacturers such as Acme-McCrary than in years past, and Anderson says this has been a significant challenge for the company. “The bigger problems facing us are the retailers’ tightening time frames,” he says. “It requires that we move faster than we ever have.”

In response, Acme-McCrary has relied increasingly on computer controls to match the new timetables. Anderson says the company also has placed more emphasis on seamless garments, which has required new technology and equipment in its production facilities.

The increased level of technology in its operations has meant Acme-McCrary has needed to find more qualified employees, as well. Anderson says the company does whatever it can to find people with the technical expertise needed in today’s manufacturing environment. “We are constantly looking for the specific technical jobs,” he says.

Fortunately for Acme-McCrary, the company has a partner in Randolph Community College, which works extensively with the company on training and apprentice programs. “We are blessed with one of the best community colleges in the state near here,” Anderson says.

Although the company hopes to find people who already have the technical knowledge, Anderson says in many cases the company chooses the people with the best potential and works to give them the skills they need. “We try to pick our best workers and train them internally,” he says.

The economic recovery may be slow, but Acme-McCrary is optimistic. The company recently was featured in a “60 Minutes” report about the resurgence of manufacturing in Asheboro. And, with the recent hiring of an ISO manager, Anderson says the company is confident that it will have the pieces in place to continue serving its customers for another 100 years.