Back to Profile Gallery > ACS Group 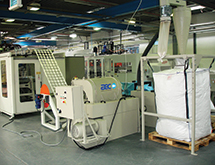 Bad products end up that way because of a bad process. On the flipside, good products begin with a high-quality process. As an equipment manufacturer for the plastics processing industry, ACS Group plays a direct role in how its clients’ products are viewed in the marketplace.

“People look at plastic and their connotation is that plastic is quite cheap,” President Jim Holbrook explains. “I would say in our industry and with our customers, they want to make sure plastic isn’t seen as cheap but as the best-cost solution to the complex needs of our customers. So the focus on quality is high. That translates into the need for temperatures being right and molds having the correct temperature, [and] controls being added to touchscreen panels so people can see what’s going on with the mixing and drying of the product during the process. To meet the demanding needs of today’s high technology process and parts, you need a repeatable process that can be monitored from the incoming material receipt through the creation of the finished part.”

Beginning with its core brands founded more than 100 years ago, ACS Group has grown organically and via acquisition to meet the equipment needs of the plastics processing industry. From its two main manufacturing facilities in New Berlin, Wis., and Wabash, Ind., as well as a third facility in China serving the Asian market, ACS Group supplies the plastics and other industries with customized equipment branded under well-known names such as AEC, Sterling and Cumberland. Each acquisition has grown ACS’s product portfolio and engineering capabilities, positioning the company as not just an equipment manufacturer, but as a solutions provider. ACS Group’s product line includes technologies such as size-reduction equipment, heat exchangers, conveying, metering and blending devices and hydraulic presses.

“There are a few different things we do but the fundamental purpose of our equipment covers a few key things,” Holbrook says. “We control the temperature of the mold so that as the polymer moves through the molding process, it flows and cools at the optimum rate to have the best quality part with the quickest production cycle times. Another important function is the conveying, drying and blending of plastic resins with various colorants, fire retardants or any other additions. The third area is granulators. When you mold plastic parts, you have leftover parts that you want to regrind and put back into the process. Top quality regrind ensures that the virgin material and regrind melt at the same rate”

Within each category, Holbrook says customers are looking for equipment that will make their manufacturing process better, faster and more accurate – all leading to an improved product. To meet this growing demand, ACS Group has invested in some key technologies.

For the past decade, ACS Group has licensed Colortronic’s technology and sold its products in the United States. It recently bought out that license and can now sell equipment using Colortronic’s proprietary technology under the AEC brand name both in the United States and worldwide. The line’s proprietary Loss-in-Weight process has been a hit in the industry due to its accurate and precise method of measuring how much of each material should go into a particular process.

ACS Group also recently introduced a new dryer used for plastic resins and other materials that need to be dried prior to the molding process. “This is used to make sure there’s no moisture in the material,” Holbrook says. “Otherwise the moisture can produce defects.”

Another recent investment was in creating a new, larger granulator called the X1800 that can handle bigger inputs and has higher throughputs.

ACS Group is able to take its broad line of products  and customize them to meet the exact needs of each customer. “Almost all of our products are made to order or configured to order,” Holbrook says. “Sometimes we get involved in engineering a complete system for the customer. The solutions are designed according to the way the client wants to mount the equipment or the manner in which they want to get things done. Fortunately, we have a good-sized product engineering group to support customers in doing that kind of work.”

ACS Group’s engineering ability will play a key role in its future growth and success, which will focus on three areas. The first is, of course, its main market in the plastics processing industry. Holbrook explains that with the emergence of cheap natural gas in the United States to produce plastic feedstocks and to fuel processing plants, plastic producers view the United States as a more cost-competitive location to manufacture than before. The second area would be diversifying into industries outside of plastic processing that have applications where ACS Group’s equipment would be of use – such as temperature control, mixing, drying and granulating. The third focus, Holbrook says, is in international growth, particularly the Asian market, which is served by ACS’s China operation.

“Customers everywhere continue to look for more accuracy and better processes – whether that’s on the blending side or temperature control,” Holbrook explains. “Better control and more accuracy is the focus. Faster, stronger and better would be the mantra for the industry.”