Back to Profile Gallery > ADCO Manufacturing 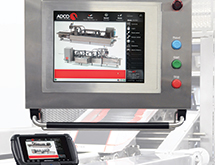 Even though ADCO Manufacturing is a 56-year-old company, the packaging machinery manufacturer has had something of a coming-out party these past few years. The Sanger, Calif., based company is a vertically integrated manufacturer of packaging machinery including end load cartoners, top load systems, sleevers, corrugated tray formers, case packers, robotic systems and retail-ready packaging machinery. Although ADCO has developed a strong word-of-mouth reputation and a steady list of repeat clients, COO Glen Long explains that increased competition has motivated the company to step up its presence.

“We have lots of new competition – including foreign competition – that was not in our industry as early as five to 10 years ago,” Long says. “So now we have equipment from Europe and the Far East that is being widely promoted and sold into the market.”