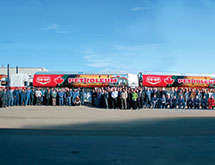 When firms work together, their synergies can provide clients a truly unique offering. That is what Advanced Machine & Engineering (AME) Co. and Hennig Inc. are doing, Marketing Manager Nick Goellner says. “The synergy between the two companies allows us to provide our customers with single source solutions that cover a variety of niches related to industrial manufacturing.”

Goellner’s grandfather, Willy Goellner, founded AME in 1966. A native of Germany, the elder Goellner pioneered the design and manufacture of the first carbide production saw.

After founding AME, Goellner acquired more product lines to distribute and built up his reputation. “My grandfather had a lot of credibility as an engineer,” Nick Goellner states. “That credibility has allowed us to have some really beneficial partnerships throughout the years.”

Those include its partnership with Hennig Inc., which was previously headquartered in Germany. After distributing its products for years, in 1999, Hennig approached CEO Dietmar Goellner, the oldest of Willy’s three sons, who all hold management positions within the company. The company asked “if they wanted to purchase the United States branch of Hennig,” Nick Goellner recalls.

Dietmar agreed to buy the division on the condition that they would have the right of first refusal to purchase the rest of the company if it became available. The Goellner family purchased Hennig Global in 2000, Nick Goellner says.

Today, AME and Hennig serve machine tool builders and users. Although AME acts as an exclusive distribution arm for strategic European partnerships, “We also manufacture and sell our own products, from CNC tombstones and custom workholding solutions to completely customized sawing machines,” Goellner says, explaining that the company will often use its impressive machinery to act as a “custom job shop.”

Hennig manufactures all of its products in-house and provides repair services, Goellner explains. “We can replace [or] service any make and model of steel or roll-up covers,” he says. “If it’s one of our competitors’ [products], we can repair it to Hennig standards.”

Those times are continuously improving, he adds. “They’ve been dropping consistently over the entire year,” he states. “They’ll continue to do so as we refine [ourselves].”

During its lean journey, Hennig has studied the Toyota Production System and the QRM concept developed by Rajan Suri. The company is also a member of a QRM group in Rockford whose members “are rethinking their strategies to be more aligned with industrial customers that demand speedy solutions,” Goellner says.

The QRM concept puts Hennig in alignment with customers who want to get their products quicker, Goellner says. “That’s the thing people really buy on,” he states.

“In manufacturing, time is money… when you consider the cost of machine down time, it is a heck of a lot of money,” Goellner claims, referencing Suri’s book, It’s About Time: The Competitive Advantage of Quick Response Manufacturing.

A longtime veteran of his family’s companies, Goellner began working part-time in their factories as he attended school. “Now, I work on sales and marketing improvements,” he says.

Goellner is proud of how AME and Hennig’s workers embrace new ideas. “We all have a passion for learning.  It is part of our company culture,” he says, noting that both companies have come to embrace new marketing ideas. “We’re doing a lot of things now that we’ve never done before.”

The company has adopted a customer relationship management platform from Salesforce.com. “It’s allowed us to become more customer focused,” he says, noting that it gives AME and Hennig more traceability in their data.

“This leads to a better customer experience because we can treat each and every customer like they are a key account from the OEMs we supply to the end-users we serve,” he says.

Both firms, he explains, appeared in Chicago at the International Manufacturing Technology Show 2014 this September.

“We made a bigger splash this year,” he says, noting that the companies previously had a smaller representation at the show.

This year, “Our booths were quite a bit different,” Goellner states, explaining that Goellner Inc. had three master booths, including one for Hennig machine protection products, another for AME’s Amrok CNC tombstone products and a third for AME that highlights the strategic network of the European partnerships.