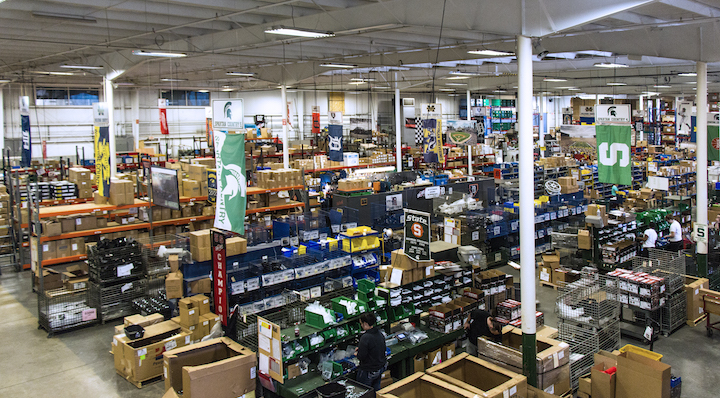 When a vehicle tows a recreational vehicle or a pickup truck has a slide-in camper placed on it, the vehicle might sag because its suspension and leaf springs are not designed for a full load. Air Lift Co. manufactures air suspension kits that work in conjunction with the springs on such a vehicle to keep it operating at a safe height. It does this by varying the amount of air inside the air spring. The same sagging can happen when towing a trailer carrying horses or snowmobiles.

“People are becoming more aware of the need for our product,” President and CEO Kevin Mehigh observes. Sometimes, drivers don’t even realize they need suspension assistance. “We have to make them realize that squat isn’t normal,” Mehigh says. “Somebody might realize they have an issue, but they don’t know there is a solution.”

Ten years ago – before Air Lift Co.’s products were sold on Amazon.com to consumers – it was harder for consumers to discover products like Air Lift’s that could help their suspensions. “Ten to 15 years ago, we were kind of a well-kept secret,” Mehigh maintains. “Today, we’re not a secret anymore. We’re pretty good at partnering with customers like Amazon. Now it’s pretty easy to reach the consumer.”

To be certified for Air Lift’s products, an installer must have a large enough shop, a high degree of knowledge about the product and its installation, buy a minimum amount of product annually, demonstrate that the shop has installed Air Lift products and received no negative feedback or calls to Air Lift’s customer service department.

A company manufacturing a product that is dedicated to a few industries has to be prepared to withstand any fluctuations in the economic climate that are particular to those industries. So when the automotive industry took it on the chin from the economy during the last recession, Air Lift Co. was prepared to handle the downturn.

“Going back to 2009 and 2010 when the world economy was falling apart, we invested into the recession,” Mehigh recalls. “As our customers and competitors were basically pulling back and cutting expenses and people, we did just the opposite – we hired people, we hired a director of sales and marketing and we invested in the company and the building.”

Mehigh confesses to being an admirer of business author Jim Collins. “We’ve had to make sure we have the right people on the bus in the right seats,” Mehigh says. “Those two things are probably the majority of what allowed us to grow as we have. We keep our foot on the gas and continue to invest in the organization. When you get the right people in the bus and in the right seat, it’s a lot easier to go where you want to go.”

Air Lift Co. built a better sales and marketing infrastructure and has doubled sales over the past five years by hiring more manufacturing representatives, among other marketing methods. “We went to installers to make them aware of who we were,” Mehigh remembers. “We invested in point-of-purchase displays that were in the installers’ stores. Then we also did a lot of work on our own website and the customer website. From a social media standpoint, we were doing the things we needed to do.” 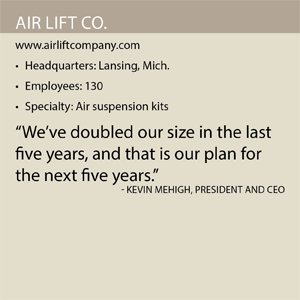 These included participating in online forums for truck, RV, boat and snowmobile drivers and owners who are candidates for use of Air Lift’s products. “We spend a lot of time and energy in those forums,” Mehigh asserts. “We may be a sponsor or answer questions. We seek out where our customers spend their time and energy on the Internet, and then we measure our results all the time.”

To streamline its production, Air Lift Co. began transitioning approximately 10 years ago to a lean cell manufacturing approach at its single, 90,000-square-foot manufacturing plant at its headquarters in Lansing, Mich. “So when building kits, if everything is right at your fingertips, you can produce a lot more kits on an hourly basis than you could before,” Mehigh points out.

Air Lift Co. has doubled the size of its manufacturing plant during the last six years. The company does its own plastics injection molding, metal machining, assembly and kitting. The company has invested in four computer numerically controlled machining centers and high-end inline testing units for manufacture of the products’ control systems. It also has increased its inventory of finished products.

“Amazon set the bar on getting products in a day or two, so we had to get really good at drop-shipping,” Mehigh says. “We invested a lot of time, money and energy in those areas. If somebody calls us up until 3 p.m., the product ships the same day, depending on the size of the order. People don’t want to wait, so we have a very large warehouse of finished goods and pride ourselves on having very high order fulfillment.” Air Lift Co. uses bar coding to keep track of its inventory.

To encourage its employees to think like business owners, Air Lift Co. operates what author and CEO of SRC Holdings Corp. Jack Stack calls “the Great Game of Business.” “We have certain metrics as a company that we have every year,” Mehigh explains. “We have certain budgets. If we achieve those and go above them – and based on the results of the employees in organizing their ideas, efforts and initiatives – we will honor them by putting more money into the game-sharing pool. So at the end of the year, they get a larger payout.”

Air Lift Co. uses scorecards to rate its vendors and holds vision meetings with employees every other Friday to reinforce the guiding principles of the company. It evalutes employees in a 360-degree survey in which the evaluation is made by up to seven other employees instead of a single supervisor.

Mehigh has big plans for the future. “We’ve doubled our size in the last five years, and that is our plan for the next five years,” he declares. “With that being said, we also have a vision of being known as a suspension company that helped create better lives. It’s about our legacy as a company.”