Back to Profile Gallery > Al-Haj Group

The pursuit of excellence

Through strategic ventures in markets as diverse as automotive to textiles, Al-Haj Group is rapidly climbing the ladder of success as it seeks to become the most exclusive business conglomerate on a national and international level

Today an emerging conglomerate with an enviable spectrum of ventures in multiple business sectors, Al-Haj group’s success comes from its entrepreneurial roots and steadfast vision of 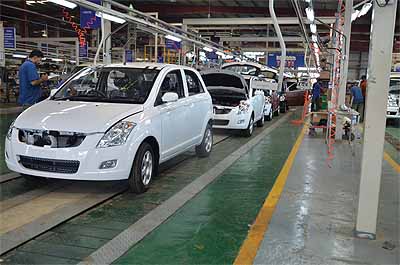 pursuing excellence in all areas of the business. The first Al-Haj company was launched in 1960 by the late Haji Sakhi Gul at the Jumrud Khyber Agency in District Peshawar, with the initial business focused on the trading of tires, textiles, electronic goods, logistics and leasing. Since then, the group has expanded into the assembly of HCV, LCV and passenger vehicles, the import of passenger vehicles, real estate, oil exploration and the Al-Haj foundry.

In the process of continuous growth under the guidance of Mr Haji Shah Jee Gul Afridi, Chairman of Al-Haj Group, the organisation delivers innovation and standards of excellence in its chosen fields to not only leave a lasting impression in these markets but also to bring in millions of dollars’ worth of foreign investment and to contribute significantly to the national economy.

Taking a closer look at the group’s business segments, Al-Haj logistics operates with major blue chip companies such as Shell, Total and Chevron as well as the state-owned Pakistan State Oil. For these companies, Al-Haj Logistics provides haulage of different petroleum liquids in virtually every city of Pakistan through the utilisation of more than 2000 vehicles, including heavy duty trucks and prime movers. Al-Haj Metallic Industry / Al-Haj Tex Industries (Pvt) Ltd, meanwhile, was launched in 1992 and has since been producing metallic yarn for the Pakistan market. Proving its mettle in the metallic business, the group expanded operations with Al-Haj Textile, which was established as the second unit to produce metallic yarn in close proximity to the original site.

Another sector where the group is wellestablished is real estate, within which the group has been involved in land development for close to four decades. Having completed a number of commercial buildings, housing, educational institutions and community projects, Al-Haj Real Estate Solutions has become a well-reputed name in the field of real estate. With a similar level of experience and reputation in the tire market, Al-Haj is now seeking to grow in this area through a TLA with leading Chinese tire company Double Star; this strategic development is anticipated to fulfil the demand of Pakistan’s growing market.

More recent developments for the group include Al-Haj Foundry, which was established as a steel pellets manufacturing and supply unit in KPK in 2014 and Al-Haj Oil & Gas Exploration, which the group became involved in following the incorporation of Al-Haj Enterprises (Private) Limited (AEPL) in 2012 as a private company under the ordinance of Pakistan. A wholly owned subsidiary of Al-Haj, AEPL is focused on oil & gas exploration within the geographical boundaries of Pakistan and boasts a range of service capabilities such as exploration, production and infrastructure.

Another integral part of Al-Haj’s success story is its progression into the automotive industry. Incorporated in October 2006, Al-Haj Faw Motors Ltd (AHFML) is the result of a strategic partnership between Faw Group Corporation, a Chinese, state-owned automotive manufacturing firm with a history dating back to 1953. The sole distributor and progressive manufacturer/ assembler of FAW HCVs, LCVs and passenger cars in Pakistan, AHFML launched its first completely built units (CBUs) product line of HVCs in 2006; this included different HCVs such as dump trucks, rigid trucks and prime movers. Following this development, local production of completely knocked down (CKD) FAW HCVs began in December 2011 and CBU light vehicles, mini vans and pickups were introduced in March 2012, with regular CKD production of mini vans and pick-ups was established in September 2012. 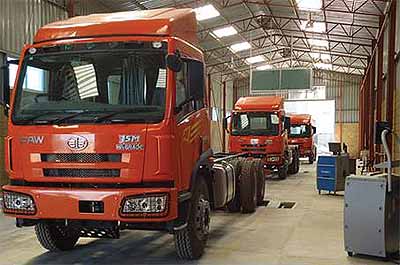 With the backing of Al-Haj Group, an organisation that claims invaluable human resource coupled with leadership and the ability to make the right decisions at the right time as the keys to its success, AHFML is set for continued success as it continues to provide local customers with high quality vehicles that meet international standards. Current products available in the company’s portfolio include heavy vehicles such as Tiger V, JSM 220 Super and JSP 330 Tornado, while its light vehicles include the XPV 1000 CC mini van, 1000 CC mini pickup truck and 1300 CC V2.

All products are assembled at the company’s motor plant, which boasts well-equipped spot welding lines with cutting edge welding fixtures of both Chinese and local origins to manufacture body steel (BIW) for all models being produced on site. Considered the heart of the automobile assembly plant, AHFML’s paint shop has been designed and constructed to cater to the production of exteriors in both metallic and solid finish shades to a level of excellence. In 2016,the group further invested in the PT/ED paint technology to standardise the OEM process and increase the life span of the end product. Since this investment, the company has been on par with any automobile assembler in Pakistan when it comes to production. In terms of assembly, the company has the only assembly line in Pakistan where HV and LV are assembled under one roof, while the tester line ensures assembled vehicles pass stringent quality checks and adjustments that conform to international standards. With the inspection line imported from Italy, customers can trust they will receive a good quality vehicle with zero defects at a competitive price.

With FAW becoming the fastest growing automotive brand in Pakistan, FAW vehicles have become the first choice in haulage for leading petroleum companies such as Shell, Total, Chevron and Pakistan State Oil. Now viewed as widely acceptable in both the commercial and private sector, FAW vehicles are anticipated to grow in demand over the coming years, which will result in further growth for AHFML and an improved economy for Pakistan as a whole as more localised operations leads to more employment opportunities and business with local vendors.

As AHFML seeks to become a market leader in Pakistan’s automobile industry, the company will continue to invest in equipment and machinery while also boosting its 3S dealership network to ensure customers are not only satisfied with the quality of their car but also the service they are provided. With this customercentric ethos stretching throughout the diverse branches of Al-Haj, the group is certain to continue achieving many milestones as it seeks to become a major national and international conglomerate.