Back to Profile Gallery > Alleson Athletic 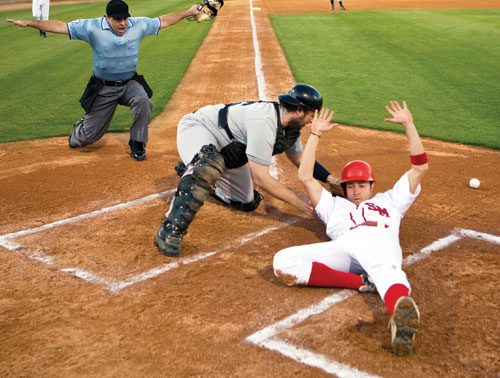 To be one of the leaders in the sportswear-manufacturing sector, a company also has to excel in multiple areas. This is why Rochester, N.Y.-based Alleson Athletic has become one of the largest makers of stock athletic uniforms and apparel in the country, and Vice President of Manufacturing Steve Schwarz says the fourth-generation family business continues to lead the market because of the tools it brings to the playing field every day.

Founded in 1933 by an immigrant cap maker and his son, Alleson Ath­letic manufactures uniforms for athletic teams ranging from recreational leagues to varsity competition. Its pro­duct line includes baseball/softball, football, soccer, basketball, hockey and track and field. Schwarz says the variety of styles Alleson Athletic offers sets it apart from other manufacturers, but it is far from the only reason the company is at the top of the leaderboard.

One of Alleson Athletic’s key stats is its inventory, according to Schwarz. Compared to many of its competitors, the company has a greater ability to fill orders regardless of the size. “We can fill an order for 20 pieces or we can fill an order for 2,000 pieces just as quickly,” Schwarz says, adding that the company has made significant investments in inventory over the years. “We think that’s the advantage we have over everybody else.”

Along with the versatility its inventory provides, Alleson Athletic also has the distribution capabilities to en­sure customers receive their orders quickly and accurately. The company’s in-house distribution is capable of shipping practically any order within six hours of receipt, and it can deliver those orders within two days to 85 percent of the United States. This is thanks to the company’s three distribution centers: McAllen, Texas; Memphis, Tenn.; and Rochester. Schwarz says that only California, Oregon and Washington are outside of the company’s two-day shipping capabilities, and it is working to rectify that.

The key to the speed with which Alleson Athletic can fill orders is the technology it has in its warehouses, Schwarz says. A barcode system allows the company to know exactly where every item is at all times, making it easy for orders to be processed and shipped within a short period of time.

Even though Alleson Athletic has the edge over its competition in numerous ways, these are still difficult times for the industry. Schwarz says pricing has been hard to manage with the ailing economy, and the rising price of oil has been rough on sourcing synthetic fabrics. To make matters worse, many of the company’s largest customers have been cutting back. “One of the things out there is that school budgets have gotten into worse shape,” Schwarz says. “They’re constricting margins, needless to say.”

Fortunately for Alleson Athletic, another of its skills is its resourcefulness. Schwarz says the company is working on developing new revenue streams in areas outside of its traditional markets, such as the medical industry. “We are open to just about any idea,” he says.

That doesn’t mean, however, that the company will abandon athletic apparel or put it on the bench. Schwarz says the company is adding more sports to its catalog – including track and field next year – and is making additions to its basic lines. With the development of new fabrics with moisture management and anti-microbial features, there are still plenty of opportunities for Alleson Athletic to remain strong in sportswear. “I think we will continue to go after the business that the company has grown over,” Schwarz says. “Every­thing is changing and there’s always a new fabric here or there.”

The company also is looking for new sourcing strategies, including Central America and the Caribbean. Schwarz says decreasing lead times will be one of the most important things for Alleson Athletic to accomplish over the next few years if it is to remain competitive.

No matter what Alleson Athletic does in the future, its past will remain one of its strongest attributes. It continues to be a family owned and operated company, with the founder’s great-grandson currently serving as president. Schwarz says the company’s continuity has helped it retain some customers for up to 50 years. That focus on service will continue to be the key strength for Alleson Athletic in the future, he says.