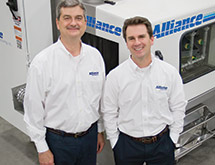 The need to clean parts is typically not mentioned alongside death and taxes, but in the manufacturing world, it’s just as inevitable. Metal stampings, machined castings, fabricated weldments and plastic containers commonly build up oil, grease, coolant, stamping lube, dust, dirt and contaminants at some point during the manufacturing process.

The need for pristine parts used in engines and other machines has led to a highly competitive market for the manufacturers of the machines used to clean these parts. The quality and design of Alliance Manufacturing Inc.’s machines, as well as its willingness to customize them, distinguish the company from its peers in this market.

“I think we do a good job listening to customers’ needs,” says Jeff Brouchoud, president of the Fond Du Lac, Wis.-based company. “We don’t say to customers, ‘We have three models of machines – pick one.’ We listen to and adapt our machines to their needs.”

One of the company’s customers, a Rockford, Ill.-based manufacturing company, sought its assistance several years ago when the cleaning machines it was using from a competing company weren’t meeting its needs. The customer also wanted Alliance to develop a small, compact belt-based washing machine for use in its operations. The machine Alliance custom-made for the client eventually evolved into its compact conveyorized Aquamaster E-Series line.

The company’s machines are used by manufacturers in the automotive, agricultural, aircraft, appliance, battery, construction, defense, electronic, screw machine, furniture, heavy equipment, housewares, marine equipment, small engine, pharmaceutical, medical and other industries. This diversity has helped Alliance manage through the ups and downs of individual sectors such as the automotive industry, which declined steeply during the Great Recession, Vice President Ken Manninen notes.

During the decline in the automotive market, the company looked into new markets to solidify its position before the automotive industry rebounded. “We were in a good position because we had the equipment and ability to serve other industries,” he adds. “When automotive came back, it was good for us because we already had established a good foothold in that market.”

Alliance’s engineering staff uses 2-D and 3-D design software to develop drawings for custom equipment based on client requests. “They will tell us what they are looking for from a machine, and we will go through possible pitfalls and the entire thought process behind developing our equipment with them,” Brouchoud says.

Following the design and development process, machines are wired and assembled on the floor of Alliance’s Fond Du Lac manufacturing facility.All machines are inspected by a number of staff members including electric engineers and shop foremen. “We all take quality very, very seriously here,” Brouchoud says. “A significant number of people have to sign off before a machine goes out of the door.”

A customer run-off process that includes a test run is also performed before machines are turned over to their owners. Alliance also often performs cleanliness tests to ensure machines clean to customer specifications, Manninen says.

Alliance assembles its machines on a just-in-time basis, and works with several suppliers to ensure it receives needed components on a timely basis. Alliance also often partners with local sheet metal fabricators to meet larger orders.

Alliance’s ability to manufacture high-quality custom machines to client specifications has earned it the loyalty of its customers. Many of the company’s customers and vendors have worked with it for much of its history.

The Alliance operation was incorporated in 1994 as a result of a product line spinoff from Damrow Company Inc., a Fond Du Lac-based producer of cheese-making and other food-related equipment, where Manninen and Brouchoud previously worked. The two initially developed an industrial cleaning equipment line at Damrow from which they purchased the rights.

Alliance also operates the website cleanparts.com, which is a division that offers lower-cost machines built from carbon steel rather than stainless steel.

The company is a regular attendee at major manufacturing trade shows including the upcoming FABTECH show in Chicago, where it will exhibit its equipment. Alliance also regularly attends the International Manufacturing Technology Show (IMTS).

“We always try to have something new on display,” Brouchoud says.