Back to Profile Gallery > Alliance Manufacturing 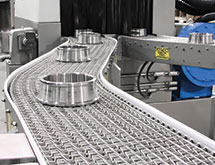 Now, two decades later, Alliance Manufacturing is attending IMTS again this September, but this time, as a strong, mature leader in its industry. “We had our 20th anniversary in May, and now, attending this year’s IMTS, it feels like we’re circling back to the beginning,” President Jeff Brouchoud says.

At its first show in 1994, the company made its debut, displaying the first generation of the Aquamaster line, a conveyorized parts-cleaning system. The design was a hit, and Alliance Manufacturing secured orders for several machines by year-end as a result.

“IMTS is the largest machine tool show in the United States, and over the years we’ve continued to generate many leads [there],” Brouchoud says. “The exposure we get there has always been great because it’s an opportunity to meet with customers and talk about applications.”

Alliance Manufacturing specializes in the engineering and manufacturing of aqueous-based parts-cleaning equipment for industrial parts-cleaning applications. Its equipment is used to clean a multitude of components, from machined castings to returnable dunnage, and is an environmentally safe alternative to solvent-based systems.

“There’s been a huge debate over solvents because they’re detrimental to the environment, and there’s been a trend of people moving away from them,” Vice President Ken Manninen says. “Solvents are also more expensive because of regulation, so environmentally friendly options, such as water-based cleaning systems, have become very appealing.”

Part cleanliness is an important consideration in most product manufacturing and plays a crucial role in rust prevention, paint adhesion, assembly, packaging and end use. By removing chips, oils and foreign debris, the quality of the end-product can be greatly increased.

“Everything that is manufactured has to be cleaned, sometimes multiples times before being assembled and before going to the customer,” Brouchoud says.

After that first IMTS show, Alliance Manufacturing took off. In 1995, it completed construction of a new facility – its current location – in Fond du Lac, Wis.

Brouchoud and Manninen had worked at Damrow together and led the effort to spin off Damrow’s new industrial cleaning equipment product line into its own company.

“We have standard products, but they are application-driven,” Brouchoud says. “If you have a need, we’ll try to assess if we have something that fits and we will customize to accommodate.”

About 50 machines are produced a year, and they typically take 12 to 26 weeks to make. There are 10 product lines from which machines can be custom-built.

The company has expanded its original facility to accommodate growth in the business, and another expansion is in the works. Alliance Manufacturing is continually investing in new and updated equipment.

IMTS dates back to 1927 and is the largest manufacturing technology tradeshow in North America. The six-day event is held in even-number years at Chicago’s McCormick Place and draws more than 100,000 attendees from 120 countries. It is an important exhibition for suppliers of machinery and related technologies.

“CleanParts.com caters to a different market than our core business,” Manninen says. “So we’re differentiating that with a different booth.”

After two decades in business, Brouchoud says he is most proud of starting from nothing and growing the company into what it is today – and of the close relationships the company has developed with our customers, employees and suppliers along the way. “Our customers have allowed us to achieve steady growth over the years and we appreciate the business. Our employees take great pride in our products and have helped us keep our customers coming back. In regard to our vendors, we’ve been with some of them since day one,” he says. “We work with a core group of about 100 – there are a lot of nuts and bolts that go into what we do.”