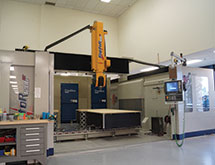 The spacecraft market demands an extremely high level of quality workmanship, and Alliance Spacesystems LLC has answered that call throughout its history, President and General Manager Rick Byrens says.

Alliance ensures it meets its clients’ requirements by maintaining close relationships with them. “We very much rely on customer feedback and working with our customers early in programs to make sure we’re giving them exactly what they want on delivery,” Byrens says.

Based in Los Alamitos, Calif., Alliance manufactures and designs composite structures for spacecraft and other applications that require a high strength-to-weight ratio, superior stiffness and dimensional stability. Three ex-jet propulsion lab employees started the company in 1997.

“The original Alliance was much more of an engineering company,” Byrens says, noting that its focus changed when it merged with Vision Composites in 2006. “What we do now is much more rooted in composites manufacturing.”

Alliance serves firms such as Orbital ATK Inc. and Lockheed Martin Corp. “These are companies that are manufacturing satellites, among many other things,” Byrens says.

In April, the company announced it will become part of SolAero Technologies Corp., a provider of space solar power solutions based in Albuquerque, N.M. “That’s going to give us some very good synergies,” Alliance Director of Manufacturing Gregory Golanoski says. “We can give our customers more value with the combined capabilities of both SolAero and Alliance. I think we’ve got a bright future [together].”

Alliance is a leader in its industry, Byrens explains, because “we offer our customers a fully integrated product.”

“So when we deliver a structure that we manufacture for a satellite, it is ready to go into our customers’ integration facility,” he says. The company also takes pride in maintaining a tidy operation. “If our customers walked in our [shop], they’ll see a reflection of their own clean facility that they work in every day.”

Alliance is flexible with its clients because it understands their needs, Golanoski adds. When dealing with factors such as costs and schedules, “You have to [find] flexible ways to work with them,” he says. “They have their own struggles.”

Alliance is enjoying healthy business in its niche, Byrens says. “In the current economic climate, as opposed to many other markets, [ours] has remained healthy,” he says.

“The total market hasn’t grown, but it has not shrunk, either,” he says. “It’s all driven by consumer demand for Internet, high-definition television [and] all the things that satellites provide.

“That demand has been increasing and continues to increase our marketshare,” he says, noting that Alliance has provided structures for satellites used by DIRECTV LLC and ViaSat Inc.

Nearly all of Alliance’s work is customized. “A satellite is basically a snowflake,” Byrens says. “Every satellite is different, as opposed to a typical manufacturing environment where you have a production line [that] can realize efficiencies [through] lean concepts.”

Golanoski agrees. “It’s a little tough to put in metrics, because we do a lot of one-off hardware,” he says. “Next month, I’m not sure what I’m going to be building. It’s a lot tougher to maintain the manufacturing floor that way.”

This uncertainty influences the company’s inventory. Usually, “You try not to have inventory,” Golanoski says, noting that it keeps some common pieces of hardware in stock. But usually, “It’s bought uniquely per program.”

Despite the challenges, Alliance maintains a high level of quality in its operations thanks to continuous improvement initiatives and training. It has hosted more than 20 kaizen events in the past three years, Byrens says.

“Some have lasted weeks and some we do in a day,” he describes. “We look at a very specific process, go through it and make improvements.”

Last month, Alliance held a three-day event where its staff mapped out its entire supply chain and procurement process, from the point where its customer requirements arrive to the point where the products are delivered. “We were able to take a very cumbersome process … and reduce that to three days,” he recalls.

The company has set on-time delivery records and earned recognitions from clients. “We’re a gold supplier to Northrop Grumman and we’re a silver supplier to the Boeing Co.,” he says. “Those things don’t happen by accident. They’re a reflection of the business and delivering what we commit to with our customers.”

Alliance’s suppliers have been integral to its success. Byrens notes that the company classifies its suppliers in three categories, including “supplier partners.” “They have visibility into our customers’ forecasts and we have long-term agreements with them,” he describes.

Another group is Alliance’s “key suppliers.” “These are typically machine shops and companies that supply us a lot of hardware,” Byrens explains.

The third consists of “maintenance suppliers,” which are often the sole source of an item. However, “We’re constantly looking at our supplier base and trying to move people into ‘preferred supplier’ status if we can get the best service possible,” he says.

One vendor that has been very helpful to the company is General Research & Manufacturing, which “has been a great last-minute shop for us,” Golanoski says. “They have dropped everything when we’ve had last-minute changes.

“General Research burns the midnight oil to get us something as soon as possible,” he continues. “They’ve been one of our go-to shops to get last-minute stuff so we still keep a normal flow. That’s been one of their niches for us.”

Byrens predicts a strong future for Alliance. “I see continued growth,” he says. “We have initiatives in place to grow our content with the biggest satellite manufacturers,” he says.