Back to Profile Gallery > Allied Alloys 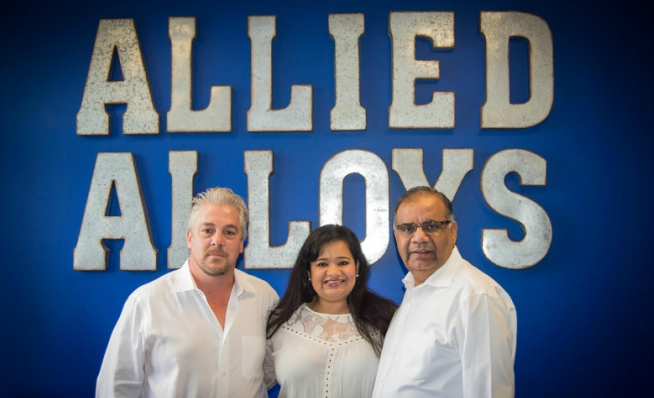 When Allied Alloys buys scrap, it knows where it comes from. “We actually analyze all of the scrap before we put it into our inventory,” Co-owner Nidhi Turakhia. “We don’t want to get involved in the trade of stuff that was not purchased properly.”

Based in Houston, Allied processes nickel alloys, non-ferrous and ferrous metals to resale into all industries including foundries, mills, as well as end consumers. Turakhia says the company was formed in 2006 when the other two current owners, Mukesh Turakhia and Andy Mitch Greenberg, formed a partnership.

Although Allied has only operated for 11 years, “We have over 100 years’ experience, because all of the owners come from a scrap background,” she says, adding that the company accepts scrap from oil and gas companies such as Schlumberger Ltd. and BP p.l.c., as well as other scrap dealers and brokers. “We accept and purchase scrap metal from all over the world.”

After obtaining the scrap, Allied handles nearly every step of the processing, including shot blasting, baling, torching and cutting. “We have every type of heavy machinery except for a melting furnace,” Turakhia says.

From there, Allied sells the scrap to some of the largest stainless steel mills in the world, including AK STEEL and North American Stainless. However, “Our material doesn’t just stay in the United States,” she notes. “We also export quite a bit of material into Asia.”

The company also operates an in house state of the art laboratory that allows AA to analyze the metal. “This in turn let’s us stand behind our quality,” she adds.

Turakhia’s family has a long history in the scrap business. “When I graduated from college in 2003, my dad had, at that point, dissolved another scrap metal company called Ruby Metals,” she recalls. 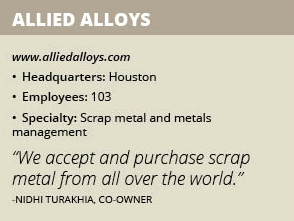 When her father needed help starting another company, he asked her to try the business for a year. “If I didn’t enjoy it, I could go back to pursuing law school,” Turakhia recalls, adding that she never looked back.

She also leaped at the opportunity to help her partner Andy Mitch Greenberg to start Allied in 2006 as an employee. “In 2008, with the economic downturn everyone faced, my family had an opportunity to invest in the company and I came back as a partner,” she recalls.

Allied is currently seeing domestic growth, Turakhia says. “Due to the current political situation, I feel as if there’s going to be a lot more growth in the recycling industry here in the United States,” she says.

A few years ago, Turakhia notes, 80 percent of Allied’s material was being exported. “Today, it’s the opposite, which is very interesting,” she says. “It gives us a good indication of how 2018 and 2019 are going to go as well.”

However, the company is increasing its share of the international market. “We believe that you shouldn’t put all of your eggs in one basket,” she says.

Allied recently reinvested in its two locations in Houston, which both sit on 15-acre sites. “We are looking at renovating one of our office buildings and moving our maintenance shop,” Turakhia says, noting that the company also plans to make some improvements to its yards.

Allied recently hired an in-house freight broker. “Because we recognize that freight is one of our largest expenses, we took the initiative to bring someone on board and manage it in-house instead of contracting,” she says.

This allows Allied to have more control. “It also has certainly brought a great advantage in that our in-house freight broker is able to maintain relationships with the truckers and the trucking companies,” she adds.

The company also has purchased new equipment, including hand-held analyzers that give users the ability to see the composition of a piece of scrap. “On [its] screen, it tells you how much nickel or how much iron [is in it],” Turakhia says.

Allied also significantly invested in diversifying its product line. “At this time, I can’t go into specifics as to what is going to come, but we are working on some major changes right now,” she says.

Turakhia is proud of Allied’s growth over the years. “When I started in 2006, we had a handful of employees for us to expand,” she says, noting that the company has grown through joint ventures in California and Kentucky.

Now, Allied Alloys has its eye on the Northeast. “[We’re] looking at opening another branch there so we can expand Allied and be closer to some of our customers and suppliers located in the Northeast,” Turakhia says.

The next two years will be extremely busy for Allied, Turakhia says.  “I would estimate 20 to 30 percent growth for the next year and the year after,” she predicts.