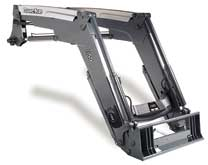 As the North American subsidiary of the Alo Group, Alo North America strives to keep the leading position in its markets, Production Director Jan Sandsjö says. “Alo’s bus­i­ness strategy is to lead the industry in innovative design and technical specifications,” he says. “We endeavor to do our part here in North Amer­ica to achieve the dynamics asso­ciated with a global leading producer.”

Alo, based in Umeå, Sweden, manufactures front loaders, implements and subframes. Founder Karl-Ragnar Åström started the company in 1949, and the firm exported its first loader outside of Sweden 10 years later, Sandsjö says.

“The company grew at a steady pace with good profitability,” he says, noting that the company moved into the North American market in 1988 when it ac­q­uired KMW, a Canadian loader manufacturer with a USA division in Kan­sas. “This was later reorganized into the current sales company, Alo North America, in Niagara Falls, Canada.”

Alo North America General Man­ager Dana Hoover, who was at KMW at the time of the acquisition, says that the company brought a new mentality to the firm.

“[In] the Swedish industrial standards, there’s a lot more green thinking than what we see here [in North America],” Hoover says. “It actually drives us toward that.”

An example of this was the environmental mandates in Sweden in the mid-‘90s that required it to change its paint system to a more eco-friendly latex-based system. This bridged its needs until a state-of-the-art power system was commissioned in 2005.

Hoover says he has enjoyed working under Alo’s leadership. “It’s been a positive experience to work for the market leader,” he says. “It’s been a very good, progressive company with a very dynamic style of management.”

Sandsjö joined Alo in 2003 after work­ing for Volvo Car Corp. He notes that he has enjoyed taking the re­s­p­o­n­sibility of changing the comp­any’s production areas. This included de­­v­e­l­­o­ping global sourcing capabilities and world-class manufacturing efficiency.

“When I joined Alo, we started the launch of our new front-end loader pro­­gram,” he says, noting that he drove the company to outsource more than it had before and set up line production.

His new steps have allowed the company to have overall equipment efficiency improvements from 50 to 80 percent.

Additionally, “Alo has a high focus on continuous improvement as a part of [the] Alo Manufacturing System,” Sandsjö  says. “Quality is built in every pro­cess in the value chain and with every employee.”

In 2009, Sandsjö says that Alo enjoyed growth through the introduction of new products as well as through an acquisition. “As do most companies in our industry, we try to time the launch of new products so that we can introduce them at major trade shows like Agritechnica in Germany and SIMA in France,” Sandsjö says.

“Agritechnica, held bi-annually in November, works well to allow us to continue the introduction of new products in North America,” Sandsjö says. “This [past] year, we introduced a new loader hydraulic control system that is the first loader purpose design system on the market, and we look forward to getting this technology in consumer hands in 2010.

“Additionally, we introduced a new loader model for high HP tractors, [for which] our largest market is in [the U.S.] Midwest and Western Can­ada,” he adds, noting that the company also acquired a firm in Telford, Tenn., in August 2009.

As the Tennessee location was already in engaged in the production of a similar product, it was well suited as a location for expansion.

“This plant will make it possible to improve our customer service in North Amer­ica and provide a manufacturing platform for a wider product offering and business growth,” Sandsjö says.

In the coming years, Sandsjö says the company’s plan is to develop its customer value so that it remains its clients’ first choice. “Customers are more demanding and competitors are catching up, so Alo needs to maintain its market leader position by having the best product offering on the market,” he says.

“Alo will develop and launch a num­ber of new loader series in the com­ing years in North America and the Ten­nessee facility will be an important cornerstone in this plan,” he says.

Sandsjö notes that the company will also grow its low cost countries capabilities. “The plan is to increase sour­c­ing especially in China and during 2010, establish a manufacturing footprint in China for export, and to prepare for the coming local market ex­pansion,” he says.