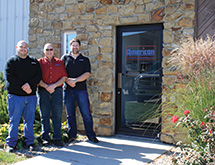 Located in the heart of the parts feeding industry, American Feeding Systems knows how competitive the business can be. President Bob Camp says the company has felt the heat from its competitors in central Indiana for years and knows that it has to go above and beyond the rest of the pack to be successful. “Frankly, central Indiana is the parts feeding capital of the world,” he explains, adding that it’s what American Feeding Systems does after it manufactures and installs a new feeding system for its customers that makes it one of the leaders in its segment.”

Founded in 1982 by Camp and three partners, American Feeding Systems specializes in vibratory and rotary feeding systems and other types of parts-handling systems used in automated manufacturing processes. It serves a diverse customer base, including automotive, pharmaceutical, food and beverage and electronics manufacturers.

In 2012, Camp purchased the company from his partners and now operates American Feeding Systems as a family business. Camp’s two sons hold key positions in sales and engineering, and Camp says the close-knit atmosphere within the company is a strong differentiator in the highly competitive feeding industry. Although there are numerous companies out there all providing virtually the same type of equipment, Camp explains that American Feeding Systems is committed to giving its customers more than they expect. Camps’ knowledge comes from being in the feeder industry business since 1969.  He uses that knowledge to benefit his customers, to help them be competitive.

“I think our greatest strength is service after the sale,” Camp says. “If a customer calls us and says they have an issue, we have a service technician there within 24/48 hours, and that could be anywhere within the United States.”

Another quality that helps set American Feeding Systems apart from a myriad of competitors is that the company works hard to incorporate the newest technologies into its products. “The industry has changed dramatically since its conception in the early 1950s, so we’ve tried to keep up with all the new technology,” Camp says.

The company’s willingness to evolve along with the industry means that American Feeding Systems has a very diversified product assortment. Camp says the company provides vibratory as well as newer types of rotary feeding systems that are in high demand today. He says newer types of feeding systems are popular with manufacturers because they can feed many different parts at the same time, rather than needing different feeders for different parts.

The extremely competitive nature of the feeding system industry makes it difficult for American Feeding Systems to compete in its home market of central Indiana, and Camp says competition is the single biggest challenge the company faces today. With so many competitors all occupying the same general region of the country, American Feeding Systems works hard to make sure its name is known throughout the country to establish a more national customer base.

The company has been successful for a long time, but Camp says American Feeding Systems sees the potential for even greater success in the near future. The company hopes to expand into a new facility larger than its current 20,000-square-foot facility within the next few years, and Camp says it plans to hire more staff to keep up with growing demand.

“My desire is to continue to grow the company, to get the larger customer base,” Camp explains. “Growth and adaptation to trends in the marketplace are a must in the parts feeding industry.”