Back to Profile Gallery > American Handforge 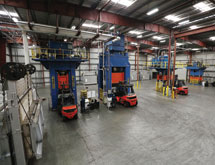 Many U.S. companies source parts and supplies from overseas, but the opposite is true for Rialto, Calif.-based American Handforge. “Forty percent of our business is [for clients overseas],” owner and President Eric Albert declares.

The aluminum, titanium and stainless steel forging company serves clients in places such as Europe, India, China and South America. “It’s usually the other way around,” he says, noting that a Taiwan-based company is one of American Handforge’s biggest customers.

Albert founded the company in 2001 after he had gained experience at his father’s forging business. “I started working when I was 10 years old during my summer vacation to earn some money for a surfboard,” he recalls.

Albert’s father sold his firm decades later, and the younger Albert was made president of the company. However, its new owners “didn’t know anything about the business,” he laments.

“They basically bought the business just to bleed it,” he recalls. “I took a hard look at myself and said, ‘This is all I know, and if I stay with these guys, it’s going to crash.’”

Albert sold his shares of the firm in 2000 and formed American Handforge a year later. Although the first few years were hard, “I had friends in this industry that wanted me to succeed,” he recalls.

When his father’s former company closed its doors, many of its clients came to American Handforge. “[It] was a shot in the arm for us,” Albert recalls. “We’re now the major player in the world for what we do.”

American Handforge enjoys multi million annual sales and is growing by 20 percent each year. “It’s been a great experience,” he states. “This is the best thing I ever did.”

American Handforge serves multiple markets, including the aerospace, manufacturing, defense, nuclear and semiconductor industries. Recently, it secured a contract with a major aerospace company to provide critical parts for the company’s line of jets.

The parts, Albert explains, connect the wing to the fuselage. “We were very fortunate to get that contract,” he says, noting that it helped launch American Handforge into titanium products. “We see a lot of growth with titanium forgings.”

Much of American Handforge’s work, he notes, is custom, which requires the company to work closely with its clients to find solutions to their challenges. He adds that the company recently helped a provider of computer chip-making equipment to enable mobile devices to operate.

At the time, the company was having trouble with its vacuum chambers, which were becoming corroded. “They needed a special type of aluminum forging,” Albert recalls. “We worked with them for seven years and developed a special type of material [that lasted longer].”

American Handforge also works alongside its aerospace clients to achieve their goals, Albert adds. “They have to reduce the weight of the plane because fuel is so expensive,” he says. “We work and develop with our customers to give them stronger [but lighter] metals.”

Although it took nearly a decade for American Handforge to find a solution for the chipmaker, the manufacturer is used to spending far less time on its projects, Albert asserts. “[Our customers] expect us to deliver in four to six weeks, and that’s what we do,” he says.  “That’s one of our competitive advantages.”

American Handforge manages to deliver at this rate by maintaining the right inventory, Albert says. “Our inventory is based on historical needs and forecasting from our sales department,” he says, noting that the company turns its inventory every 45 days.

The company also ensures a quick delivery by managing all of its testing and thermal processing in-house. “We control the time it takes and we also control the quality of it,” he says. “That’s a huge advantage.”

He notes that American Handforge regularly performs destructive testing, where it tests the limits and strength of its products by trying to break them. “We’re always looking to go outside the envelope,” he says.

Albert is proud of the environment he has developed at American Handforge. To have satisfied customers, “You’ve got to start with happy employees,” he says. “They have to enjoy what they do.”

While many perceive forging shops as dirty and loud places, “We built a beautiful facility,” he says. “It’s very safe, clean, the equipment is new and it’s modern.”

He also praises his staff. “I’m proud of them because they’re taking it to another level,” he says. “They’re taking my dream and building on it.”

That includes his two sons, who now work at the company. “They take a lot of pride in ownership,” Albert asserts. “They work very hard.”

American Handforge usually hires its workers out of college and trains them about forging in ways that cannot be learned in the classroom, Albert says. “The things that I learned from my father I’m passing forward to the next generation,” he says.

These include methods that the company’s employees would not learn about outside of the United States. Because of these approaches, American companies turn to American Handforge and avoid outsourcing their forgings to other countries. “It’s a technology that started here and needs to stay here,” he says.

“I see a need for our product for the rest of my lifetime,” he says. “[But] we have the talent to do other products.”

Albert plans to leave the future largely up to his current staff. “I want them to take it to the next level,” he says. “There’s a lot of opportunity.”