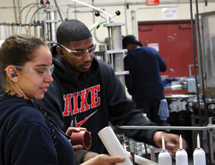 Not many companies last half-a-century, but American Jetway Corp. has beaten those odds and has no intention of slowing down, Janice Germann says. “We’re growing and it’s going to keep going that way,” she declares.

Based in Wayne, Mich., the firm primarily supplies aerosols, liquids and specialty packaging for the automotive industry. American Jetway started operations in 1963, with the first aerosol cans off its lines being touch-up paints used on automobile engines right off the assembly lines. The company saw heavy competition during the early 1970s, with nearly 500 private-label packagers for aerosols.

Since then, that number has dropped to approximately 200, as many have closed their doors or have been absorbed into other operations. For the past 20 years, COO Janice Germann and President/CEO Gordon Jones have been partners at American Jetway and are its majority shareholders.

Jones adds that, in the past two years, American Jetway has grown by 67 percent, as it has added new staff members and responded to customers who sought new coatings for waterproofing, rust inhibitors and degreasers.

“Customers were looking for places to produce it, package it and ship it to them,” he recalls. “We were able to respond to these customers’ needs more quickly than other suppliers were able to.”

Recently, American Jetway commemorated its 50th anniversary with a large party that its employees and their families attended, along with locals from the community, including Wayne Mayor Abdul Haidous. “He presented a very nice plaque for our achievements,” Jones says.

American Jetway can respond quicker than its competitors thanks to the expertise and flexibility of its team, Jones says. “We’re very knowledgeable about what it takes to make things happen,” he says.

For instance, when one client came to American Jetway and wanted it to produce 500,000 units in a month, it created a second shift that it could devote to that client’s products.

“We had to double our capacity overnight,” Director of Marketing and Sales Jeffrey Clos recalls.

This meant training another team to work the night shift within a month’s time. In addition, American Jetway had to grow its mixing department staff so it could run as a triple shift, and install another aerosol line on the day shift to ensure current orders were filled within the accepted time frame.

The firm also maintains quality by having multiple quality control associates keep an eye on its production line, Jones says.

“That can do a lot for you,” he explains, noting that American Jetway also trains shippers to keep a close eye on products. “Our credo is that everyone is [focused on] quality from the product’s birth to shipping it out the door.”

American Jetway currently has four buildings in Wayne, and it recently invested $7.5 million in an extensive land overhaul that has grown its footprint to 176,000 square feet. This includes converting its 108,000-square-foot location on Venoy Road into a full-fledged aerosol facility, as it is not currently set up to run aerosols. This will include the installation of a fully automated aerosol line.

The company also recently purchased a 35,000-square-foot building on Myrtle Street in Wayne, giving the company ownership over the entire north side of the road, Clos says. With the new facility, American Jetway will have additional storage capacity for chemicals and propellant.

American Jetway recently added to its R&D department and put its employees through extensive training at the Michigan Manufacturing Technology Center.

The company believes it will grow because its products’ reach is expanding to other sectors, Jones says. “[While] we were pretty much in the industrial/automotive aftermarket, a lot of the products are going towards the retail arena,” he says. “[We’re also] getting into the janitorial and supply arenas.”

A constant challenge for American Jetway is adjusting to environmental regulations, Jones says.

“The mood is to try to become greener and greener,” he says. “What’s happened is we’ve had to continually modify our products to meet the growing regulatory demands worldwide.”

All nations, he notes, have adopted global harmonization systems. Being consistent with all regulations has been difficult because for “every country you went into, you had to do something different,” Jones says.

The state of California also has been a challenging market for American Jetway, as it has recently required reductions in the amount of volatile organic compounds. After another recent change, “We’ll have to adjust again,” Jones admits.

Despite the challenges of American Jetway’s work, it has given Jones moments of personal satisfaction, including a recent visit by Michigan Senator Hoon-Yung Hopgood.

“He did stop in and took the better part of two hours with us,” Jones says, noting that he was gratified by the experience.

He is also pleased with the working environment at American Jetway. “It’s a great working relationship [we have] here,” he says.

Clos adds that he is pleased by its rate of growth. Although it is growing at a fast rate, it is doing so without sacrificing quality or customer satisfaction. “If you do too much too fast, you’re bound to leave somebody behind,” he says. “We’ve found a nice balance.”

Looking ahead, American Jetway plans for continued growth as it reaches out to more markets. However, “We’re well represented in the bigger markets,” Jones says, noting that the company’s reach already takes it as far as China, Australia, Europe, Canada, South America and Indonesia.