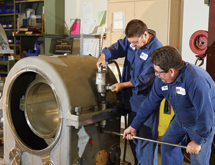 Founded in 1921, American Metal Bearing is a top-3 American supplier to the U.S. Navy of essential propulsion bearings for surface and submarine vessels.

John Henderson, vice president of contracts and manufacturing, says the large size of the bearings surprises most people. “They are very big,” he says. “I talk to a lot of people and when they go and look at the parts they say, ‘My God, those things are huge.’ It comes as a surprise to a lot of people.”

The large size corresponds to the sizable requirements for Navy ships’ propulsion systems. “If someone goes underneath a ship and actually looks, you see these are the heart of the ships,” Henderson says. “It’s how they get the power from the engine room.”

Navy ships must be battle-ready, tested and capable of sustaining damage. It is not going too far to say the lives aboard depend on the quality of the ships and their component parts. “The requirements are very stringent for combat ships,” Henderson says. “They have to be ready to go to war, take any kind of battle damage and still bring the crew home safely.”

On the manufacturing side, American Metal Bearing conducts the complete casting process with highly qualified casting companies around the world. It receives the parts and then completes, machines, packages and assembles them, and finally sends them to major shipyards. A small number are sent directly to the U.S. Navy.

On the engineering side, it is now working on a major project for General Dynamics Electric Boat.

On all projects, American Metal Bearing conducts full analysis of designs. “We start with a clean sheet of paper,” Henderson explains. “Once we can develop the proper project for our customer and obtain approval we move to the manufacturing process. We can’t do what we do without our engineers backing us up.”

“It is really a challenge,” Henderson says. “We have to sit down and brainstorm. How can you do this at a quicker pace and save money for the government?”

The company is currently looking to the future with an eye to working on the new Ohio-class of submarines, the latest generation in the fleet.

Henderson credits American Metal Bearing’s vendors for much of its success. He also credits them for helping to assure the safety of America’s sailors, whom he thanks for their service.