Back to Profile Gallery > American Posts 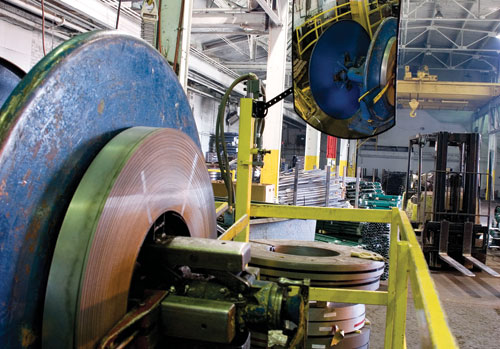 However, as with many similar items used in everyday life in the United States, most of the manufacturing of the posts is performed in China, with one notable exception: American Posts LLC.

With a total yearly production of 5,000 tons – more than 4 million individual posts – the Toledo, Ohio-based manufacturer represents a quarter of the worldwide u-post market, a number company President David Fen­iger looks to increase.

Through its “Buy A Stake In Am­er­ica” advertising and media campaign, the company urges retailers and re­sellers to purchase its homegrown pro­ducts. “We stress the point as hard as we can with retailers about buying American,” he says. “Every time they add distribution centers or increase their order volume, that not only helps add jobs to our facility, it also helps add jobs to the American steel mills and service centers.”

One major advantage the company offers to customers is just-in-time delivery. Products typically are shipped in two days to meet retail customers’ needs as opposed to the 90 days typically needed for delivery from overseas.

Its shipping capabilities, as well as an emphasis on increasing its efficiency and investing in new equipment, have helped contribute to the company’s stability during the recession. The company’s first-quarter 2011 sales figures show a volume three times higher than during the same period in 2010. “There is a regular demand for this product,” Feniger says. “We have continued to service our customers in terms of price and delivery.”

American Posts continues to in­crease its market share in part through entering new markets. In 2010, the company began manufacturing barbed wire entanglement posts for the De­partment of Defense to be used in troop sites in Iraq and Afghanistan. “We went after a market there wasn’t much competition in,” he adds.

The company manufactures both light-duty and heavy-duty posts in lengths ranging from 3 to 7 feet. All manufacturing is performed in Tol­edo using a state-of-the-art manufacturing line the company invested more than $1 million in shortly after it was established in 2005, Feniger says.

Steel coil is formed, stamped, welded and roll formed on the same production line before going to a powder coating line, where posts are painted green. All mill operators and supervisors are trained to check their quality.

Another key vendor is Sherwin Williams, which provides the paint used in powder coating. “Our suppliers are very supportive of our manufacturing operations, especially our efforts to encourage customers to buy Am­eric­an,” Feniger adds.

American Posts and its two sister companies represent the third generation of the Feniger family’s involvement in the steel industry. David Feniger and his father, Bill Feniger, founded American Posts in 2005 after purchasing and modernizing the operations of a smaller manufacturer, he says.