Its physical contact connector placed the company on the map. But its new product clearly demonstrates that Amphenol Fiber Systems International is on the beam.

The Allen, Texas-based company designs, manufactures and markets fiber-optic interconnect solutions that are designed to withstand harsh environments. They are most often used in military, oil and gas, mining, industrial and broadcast applications.

In October 2016, Amphenol Fiber Systems launched what it considers a top-notch fiber-optic connector in the market: TFOCA-XBT4. It is a new and different take on the company’s flagship product, the TFOCA-II physical contact connector, which is the standard fiber-optic connector for many ground military and industrial applications.

“The TFOCA-XBT4 is a product that takes the best of our product designs and puts it into one connector,” General Manager Ben Reed says. “It’s new and different technology.

The TFOCA-XBT4 expanded beam fiber-optic connector is specifically designed to operate in harsh environments. The connector’s lenses enlarge the optical beam at the mating interface, meaning the connector is generally less susceptible to increased insertion loss under certain adverse conditions like dusty environments.

Although physical contact connectors, like the TFOCA-II, are good solutions for certain environments like humid climates, they can be sensitive to dirt, dust and other contaminants. The TFOCA-XBT4 is not as sensitive. “It performs well in dry and dusty environments,” Reed says. “If the lens gets a spec of dust on it, it’s not going to interrupt the signal as it would with a physical contact connector.”

Amphenol Fiber Systems offers one of the broadest portfolios of both expanded beam and physical contact connectors. It also makes hybrids, which have been growing in popularity in the 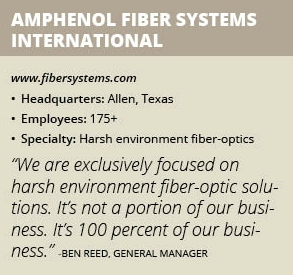 “A hybrid connector design has both fiber-optic termini and electrical contacts,” Reed says. “It’s very efficient. It saves space, allows for more high-speed data and helps with organization. For example, instead of having four or five connectors in tight spaces like equipment panels, you have one.”

Hybrid connector designs are favored solutions for oil and gas, military and medical industries. “We’ve been offering hybrid versions for years,” Reed says. “But what’s new is that there’s an increase in customer demand. In general, people want solutions that are lighter, smaller and faster.”

The company has been selling variations of its NGCON fiber optic connector since 2007, but given its success it launched a new configuration of the product in 2017.

It features a rear release termini, genderless termini, high-density arrangements and wall-mount and jam-nut receptacle configurations. Its applications include avionics, military and naval shipboard and dockside communications. “The product is meant to be the next generation of physical contact fiber connectors,” Reed says. “It marries the best features of legacy products.”

Founded in 1993, Fiber Systems originally focused on supplying components for a handful of military products and soon became a certified Department of Defense supplier.

In the late 1990s, the company developed TFOCA-II, which eventually became the standard tactical fiber-optic connector for the U.S. Army and placed Fiber Systems on the map.