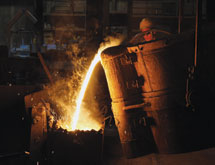 At that time, Manitoba Steel was the first foundry in Western Canada to have an electric arc furnace. Over the years, this foundry operation continued to grow by developing innovative products for the ever-expanding mining industry and the railway.

In 1946, the company took the name AMSCO Cast Products, with AMSCO as an abbreviation for “the American Manganese Steel Co.,” Chung explains. When he took over the company in 1995, AMSCO took its current name.

Today, AMSCO employs a staff of more than 100 and is expected to have sales of $20 million by the end of the year. Chung says 70 percent of its work consists of repeat business.

“When some industries have a difficulty with their cast products, they come to us,” Chung says. AMSCO’s main customer base includes a railway company, and a major OEM for the iron ore palletizing equipment.

In the past decade, many companies attempted to become high profit makers by utilizing offshore manufacturing in China, India and Malaysia. Now, they find it is too costly to go overseas and have turned back to AMSCO, Chung says. “Other factors such as reliable delivery and quality are very important for customers to maintain their on-going operations,” he says.

“With the rapid increase in offshore production and shipping cost in recent years, the price gap between offshore and North America is getting smaller,” he states. “In addition, we offer good service, local technical support and can produce over 30 different types of alloys, so they are gradually coming back to Canada.”

Picking Up the Business

Before joining AMSCO, Chung was the vice president of finance and administration at another steel foundry. “The transition [to AMSCO] was very smooth, because I was already in the steel foundry industry for years,” he recalls.

Under his management, AMSCO has been blessed with an employee turnover rate of less than 2 percent. “Most of our experienced workforce has been with us 20 years,” he says. “I believe AMSCO offers steady employment, a safe and healthy working environment and the company provides a good benefit plan to employees.”

Chung also strives to ensure that AMSCO keeps a close relationship with the Selkirk community. “We participate with the community functions,” he says. “For example, we have participated the last 25 years for Selkirk Sportmen Dinner Association.

“Through this event, we support fundraising, which provides assistance to the families who need to be with their child for operations,” he states. “[The] AMSCO foundry is located in Selkirk and employs many local and other rural areas’ residents.”

A factor in AMSCO’s success, Chung notes, is its diverse customer base. “[In our] product mix, we are not relying on one single industry,” he says, noting that each requires a different type of steel and foundry engineering to develop.

“When one industry slows down a little bit, it kind of offsets by another type of industry,” he says. “That’s why, even [during] the worst economic downturns in 2009, we were able to sustain our operations. At that time, the production for most of the industries dropped considerably since the thriving times of the early ‘80s; however, we managed well under that economic downturn.”

AMSCO provides the construction industry with wear components that help crush and recycle concrete and asphalt. “In addition, our foundry manufactures dipper and loader teeth for earthmovers that are used for new road construction,” Chung says.

AMSCO has provided castings to railroad clients for more than three decades. “In North America, there are very few steel foundries that can produce those types of railroad products,” he says. “The railroad castings have established very high specification and standard. AMSCO has over 30 years in manufacturing these types of castings. Furthermore, AMSCO has a team of highly skilled and technical [professionals] that are well equipped to work closely with [a] railroad company to address their [requirements].”

The iron ore mining industry also has been strong for AMSCO. “We provide castings for the iron ore palletizing industry,” he says, noting that many major mines buy these castings on a regular basis. “We also work very closely with one of the world’s leading iron-ore palletizing equipment [OEMs] to supply them with the top-quality heat resistant stainless steel castings for their new plant [installations] around the world.”

In 2016, AMSCO will be 100 years old. Chung says the company will sustain its legacy of success as long as it continues to provide quality products. “We have all the experience and the work force [to do so],” he says.

Chung adds that the company has put a succession plan into action for when some of its senior managers ultimately retire. “We are already training the people,” he says. “The future looks very promising.”