Back to Profile Gallery > Andantex 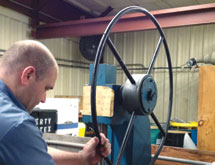 Since 1980, Andantex has been a leading provider of high-tech motion control components and systems. All sales, manufacturing, engineering and after-market support are located at the company’s headquarters in Wanamassa, N.J., including the assembly, service and manufacturing of Anglgear® right-angle gearboxes.

Andantex is the North American partner of Redex, a global firm based in France that supplies the machine tool, automation and material-handling industry. “We are partners,” Andantex Vice President of Sales Bruce Bradley says. “We do the engineering and the servicing, and some of the products we assemble here with a special injection machine.”

Besides Andantex’s 10,000-square-foot manufacturing plant in New Jersey, Redex has three manufacturing plants in France and a worldwide sales and support network. “We also do assembly and service on the other products that we sell out of France,” Vice President of Engineering David Regiec notes.

“With the advent of all the airplanes being made out of carbon fiber instead of aluminum, manufacturers had to develop automated fiber placement machines specifically that can place this carbon fiber onto a mold and build things like a fuselage or wing,” Regiec explains. “So they’ve developed these huge machines because they’re building huge parts, like the center fuselage of an airplane.”

Some of the largest jet airplanes being built use carbon fiber components extensively. The carbon fiber is on a ribbon or tape ranging from 1/8-inch to half-an-inch wide that is laid in the direction in which force is placed on the component. “Carbon fiber is very light and very strong,” Regiec notes. “The drawback is it’s only really strong in one direction. So if you pull on it, it’s very strong, but if you push on it, it’s very weak. So when they build these structures, they have to put all the carbon fibers in different directions, so no matter which way the wind hits the plane or stresses are put on, there’s a layer of carbon fiber that can be strong.

“These machines have a head that can process up to 50 or 60 tapes at a time, and the head moves in x, y and z motions,” he continues. “It’s just like gluing tape onto a tool. The reason the different carbon fibers are so thin is they have to go over crazy contours and very precisely be laid onto a part. The carbon fiber is laid onto a mold which looks like the part they’re trying to make. So these are very high, very massive machines – between 100 and 200 tons – and they move at very high speeds – 50 to 60 meters per minute. They have to control position very precisely, within two-thousandths of an inch. Our gearboxes are used with the rack-and-pinion on the axis drives to move the axis.”

As automated manufacturing has become more and more specialized, the mission of Andantex USA Inc. has been to provide the engineering and consulting expertise to help those who design and manufacture automated systems. The company’s high-precision motion control components and systems are used in the machine tool, automation and material-handling industries.

Motion control equipment used in machine tools is one of the company’s primary markets. “In the machine tool industry, it’s a similar construction except in place of a fiber placement head, it’s a milling head for cutting metal,” Regiec notes. “On a lot of machine tools today, they want to make many different types of parts, and they want to machine many different materials, from aluminum – which can be machined at very high speed and doesn’t need a lot of force to cut the metal – to titanium, which has to be machined at a low speed and needs a lot of force at the tool.”

The solution was to develop a two-speed gearbox. “That allows us to optimize the power the motor can deliver,” Regiec points out. “You’d have to increase the size of the motor four to five times to provide the same force if the gearbox is not used. This requires a much larger and heavier motor that will increase the footprint of the machine. So our two-speed gearbox is a gearshift. It’s a lot higher quality gearing and sees a lot more loading than a car transmission. A high-precision milling cutter cannot vibrate against a piece of steel.”

The company also provides motion control components for large horizontal lathes. “Where it’s a long part that they’re making, the carriage that holds the tool has to move back and forth along the part and be positioned very precisely,” Regiec emphasizes.

Instead of moving massive components with great force, some of Andantex’s products are used in small machines that employ lasers, plasma or water jets to cut intricate parts. “Even though it’s a much smaller size and you’re moving less mass and force, you need very precise motion,” Regiec notes. This requires rack-and-pinion plus reducer drives. “I would say our products are in two extremes,” he remarks – the very large and the very small.

Among Andantex’s competitive advantages with its rack-and-pinion components is their range. “They’re modular designs and they come in fixed lengths, so they can be linked together easily to build any length a customer wants,” Regiec points out. “Because it’s a standard modular line, they can be produced in quantity, and that means it brings the cost down.”

Andantex supplies a complete rack-and-pinion system that consists of a gearbox with a pinion, the rack and a new type of lubrication system. “The new lubrication system, Flexxpump, automatically relubricates the racks,” Regiec explains. “So it consists of a very unique pump system that pumps grease through a pinion that looks just like a steel gear except it’s polyurethane foam. It holds the grease and applies it to the rack. The same system can be used to lubricate linear bearings on the same machine. It’s a new product that helps support our existing product so we can provide a complete solution.”

Among the trends in the market is continuing competition with systems using direct-drive motors. “The problem is for the same output, torque speed and power, the direct drive has to be much bigger than a smaller motor with a two-speed gearbox,” Regiec points out. “When you stop a lot of times on these machines, you have to hold them in place. So you need much less energy to do that if you have a gearbox, as opposed to if you have a direct-drive motor. Our products are evolving to become more green.”

In addition to the Redex products, Andantex is the sole manufacturer of the Anglgear® right-angle drives. This line of gearboxes consists of 14 different models, available in both an inch and a metric series, that is sold worldwide. Standard units are available from stock in 1:1 and 2:1 ratios. All of the Anglgears are manufactured, assembled, inspected and tested at the company’s facility in New Jersey.

Andantex also will modify its standard gearboxes for customers’ specific application requirements, such as making a shaft longer on an Anglgear, putting a thread on it and meeting special backlash requirements. “That’s where the design part of the engineering team comes in,” Bradley points out. “Ninety percent of our Anglgear sales are through distributors – so we don’t know where the gearboxes go – some are used in automation and some in aerospace, but in a lot smaller horsepowers. The smallest one is a fractional horsepower. Up to 25 horsepower is the highest.”

“Every day, I explain how to use components, how to mount them to their machine, what to do, what not to do and how to optimize their performance,” Regiec reports. “We also act as an interface with our colleagues in France. If we find something new or find maybe a different way to use the product, that can bring new ideas for future development.

“If there’s ever a problem in North America, we can service the products,” Regiec continues.

“We can assemble the products here, and we have machine tools in our shop where we manufacture products, as well. So we’re a full-service mechanical company.”