Back to Profile Gallery > APCT Inc. 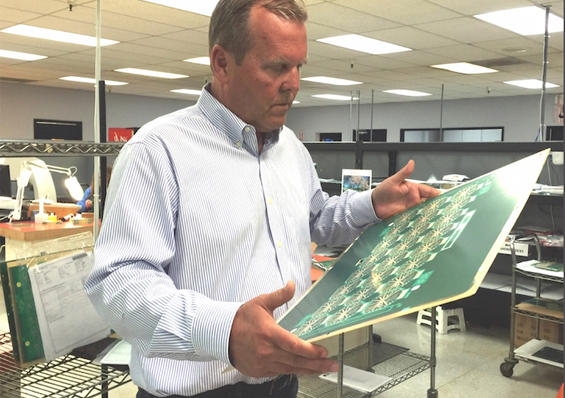 More than 40 years after he started in the printed circuit board industry, APCT Inc. CEO and President, Steve Robinson is still leaning on the lessons he learned in the early days of his career from his father, Ralph Robinson. Ralph was one of the founders of the circuit board industry and gave Steve his first job in the market. “He really taught me the values and at 86 years old he’s still teaching me today,” Robinson says.

While working for his father, Robinson had roles in both the manufacturing and customer-facing sides of the company. The experience taught him to be sensitive to both the production and sales aspects of the business. From the start, his father instilled in Robinson that employees must have a passion for their work in order to earn a positive reputation from customers. “All those values that he taught me are still the same ones I run the business with today,” Robinson adds. “Most companies describe what they are, the capabilities they have, what they do. The focus of our company is sharing the qualities of who we are: our passion, our commitment and our dedication to maintain the ability to say ‘yes’ to our customer’s needs in both technology and in lead time.”

His father’s values stuck with Robinson and gave him a sense of the right way to do business. He moved to Data Circuits Systems in 1996, which was later acquired by Merix Corp., where Robinson became the executive vice president of global operations. Merix was a large company with $300 million in annual revenues, but its corporate culture didn’t mesh with Robinson’s philosophies and core values. It was too big and sluggish. Robinson felt a smaller company that was quick and agile, refocusing on high mix and low volume work would better serve the customer. In in 2008 he left Merix and purchased Advanced Printed Circuits Technology, which became APCT.

Robinson’s business model was challenged immediately. When he bought APCT in 2008, employees worked one shift a day, five days a week. The company had $5 million in revenue, almost all of it coming from two primary customers. If Robinson was to grow the company, he knew there needed to be buy-in from everyone involved and a belief that his direction and niche was correct.

Within one year, the company reinvented itself as a time-critical manufacturer, able to produce circuit boards far faster than the industry standard. To support the new business model, the number of shifts tripled and the company’s hours changed to 24/7. A handful of customers have now changed to 400 customers. Most customers are Tier II and Tier III manufacturers, with no one client representing more than 8 percent of APCT’s business.

The company’s $5 million in revenue has now changed to $25 million. The increase in revenue comes from a variety of industries including medical and industrial, defense and aerospace, computing and storage. No single industry segment is more than 20 percent at any given time. This strategy is implemented as a safe guard during challenging economic times.

Changing cultures and following your own belief in a most competitive industry, can be easily questioned and second-guessed. However, eight consecutive years of double digit growth has confirmed that his instincts in the market place are correct and that the values learned from his father – of surrounding himself with those who feel passionate, committed and dedicated to their work – was the right path chosen. 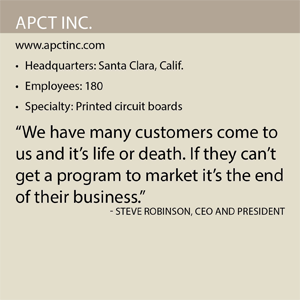 Even as the information age surges forward, creating mountains of data each second, Robinson says the circuit board industry at its core remains a people business. “People still ultimately make choices of who they want to do business with no different than when you make a choice with your family and friends about where to go for dinner,” Robinson explains. “You make choices based on the service and the quality of the product you receive.”

Any circuit board manufacturer can produce a new printed circuit board. Ultimately, what APCT sells is trust and loyalty. The company makes a personal commitment to its customers by being honest, listening to their needs and clearly identifying what it will execute for the clients.

“Customers make the choice to come to us because they don’t receive that from everybody,” Robinson says. “They perceive their current supplier as someone who doesn’t care about their business and doesn’t care about them personally.” APCT offers a passion for success and dedication to the job, and strives to make its entire customer base feel important. It’s a strategy Robinson says will continue as the company grows.

It’s not enough to have a good approach to relationships. Successful companies must also be able to deliver on its customer’s needs. APCT has reinvested nearly $7 million back into capital improvements during the past six years, including 100 percent of its net income each of the past two years.

Those regular investments enable the company to stay ahead of its customers and develop the technologies that support its client’s current and future needs. “That’s the commitment you have to make to stay on the leading-edge of technology and speed,” Robinson says.

APCT’s 35,000-sqaure-foot manufacturing facility in Santa Clara, Calif., utilizes limited automation because the company must turn new tools for each of the 15 to 25 custom jobs it undertakes each day. Manufacturing is set up for speed, and APCT operates at a pace few rivals can match. The industry standard lead-time for manufacturing a printed circuit board is three to four weeks plus. APCT offers standard delivery in 10 days.

Speed is one of many highly sought after APCT value propositions. As technology evolves, the design of new electronics often takes longer than anticipated. Companies come to APCT because they are behind schedule and need to buy time and meet targeted launch dates. “We have many customers come to us and it’s life or death,” Robinson says. “If they can’t get a program to market it’s the end of their business.”

As a reputation based QTA supplier, it means that APCT always has the capacity available to take on a new project. Being able to provide that capacity requires a commitment from financial partners who are willing to operate with minimal backlog. Forecasting or budgeting a $25 million business with $1 million of backlog or less is scary for even the bravest of bankers or financial partners. Those tight timelines mean APCT must manage its supply chain as efficiently as possible, as there is limited visibility into projects coming down the pipeline. But it does mean that APCT fills a niche that other companies simply don’t have the capability or desire to match.

“Our hair is on fire from the moment of the order,” Robinson says. “We work in minutes and hours where most companies like to work in days or weeks.”

The APCT family got larger in April when the company acquired Tech Circuits, another circuit board manufacturer based in Connecticut. Tech’s 46,000-square-foot facility not only brings enhanced capacity to the customer base, it also gives additional regional support as well. “The acquisition not only gives our people the tools to be successful, but it also answers our customer’s needs of more technical support and consistent world class lead- times,” Robinson says.

The purchase brought APCT’s total annual revenue up to $38 million and its workforce now numbers about 180 people. “Having capacity and technical support based in both the heart of Silicon Valley in California and the heart of America’s business corridor in Connecticut is certainly an advantage for us,” Robinson ssays. “But make no mistake, it’s the people that differentiate us from the competition.”

Lessons learned from his father over 40 years ago are bearing fruit today.