Cult British car manufacturer Aston Martin is revelling in a fruitful period of trade and innovation, hoping to extend it into a new golden era in its history

No one who claims to combine affection for both fast sports cars and British cinema will fail to recognise the brand that has become synonymous with the legendary character of James Bond. Indeed, both 007 and his Aston Martin cars are considered quintessential British cultural emblems, with Aston Martin’s DB range, in particular, being inevitably associated with Her 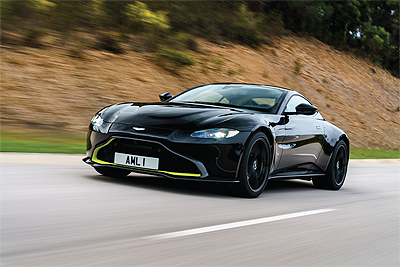 Majesty’s top secret agent. In April 2018, the DB brand (standing for David Brown – the famous British industrialist who bought Aston Martin in 1947) celebrated its 70th anniversary and the occasion saw it launch the latest models to its eminent portfolio – the V12 and V8 powered DB11 coupe and DB11 Volante.

Throughout the 1950s, it was the DB2 that epitomised David Brown’s vision for Aston Martin.The model blended beauty, performance, handling, and quality – four ingredients that have acted as the blueprint for all subsequent models ever since.Then, even though it lasted only two years, the DB5 earned world fame thanks to its appearance in Goldfinger – the third James Bond film (1963), becoming an icon for every new generation of cinephiles. The new century – defined by immense technological advancements, brought about the DB9 car, as well as its successor – the DB10, which also became 007’s first ever fully bespoke road car. In present times, following the release of the new DB11, Aston Martin is launching another new model to the range, in the guise of the DBS Superleggera, which is expected to be revealed to the public at the end of this summer, replacing the second-generation Vanquish S model.

Aston Martin’s Second Century plan, unveiled in 2016, set the ambitious task before the company to introduce seven new core models by 2023 that would form the backbone of its presence at the car manufacturing scene in the years to come. Almost simultaneously with the launch of the DB11, Aston Martin presented its brand-new Vantage at the 2018 Geneva Motor Show. Regarded as the most sporting model in the manufacturer’s production range, the new Vantage replaces a predecessor of the same name, which was the single most successful model in Aston Martin’s history, and hopes are that the successor will cover itself in even greater glory

Deemed a born predator, the new Vantage is powered by a 4.0 litre twin-turbocharged V8 engine and, to quote Aston Martin’s CEO, Dr Andy Palmer,“is a testament to our uncompromising pursuit of the beautiful.”The car has deliberately been designed in a way that evokes animalistic associations, with sculptural forms creating an athletic predatory stance and muscular flanks and broad haunches expressing the agility and dynamism inherent to the model, as significant emphasis is placed on its aerodynamic capabilities.

Another early highlight of 2018 was Aston Martin’s demonstration of its Lagonda Vision Concept that aims to transform Lagonda into the world’s first zero-emission luxury brand.The Vision Concept is essentially a near future study that previews the design language that could potentially be seen in the new Lagonda models from 2021 onwards. Harnessing the trend for electrification, the designers have been able to pay much more attention to the car’s interior and then build up the exterior around it, without the need of packaging a vast internal combustion engine, gearbox, and transmission.

Having worked with renowned craftsman David Snowdon, Aston Martin’s concept for Lagonda involves an eclectic interior made from cashmere, silk, carbon fibre, and even ceramics, fused with the car’s advanced autonomous capabilities.While autonomy is nothing new to luxury car owners, the Lagonda Vision Concept takes into account the higher level of automation that is anticipated to become the standard in the next few years.As a result, it projects the entire retraction of the steering wheel, thus allowing front seats passengers to rotate through 180 degrees to face those in the back and engage in a conversation. At the same time, the car will maintain a 360-degree awareness of the world around it to ensure the passengers’ safety. Furthermore, the concept has been configured to accept powerful solid-state electric batteries enabling it to cover up to 400 real-world miles between charges, whilst also designed to be compatible with the latest wireless conductive charging technology. 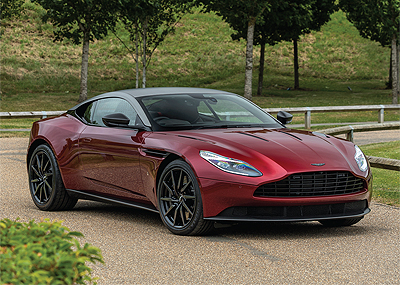 The Second Century plan devised by Aston Martin also encompassed the opening of a second UK manufacturing plant, to complement the fabled Gaydon facility in Warwickshire. After careful selection from 20 potential global locations, the company made a choice to acquire MoD St Athan – a former military base in southern Wales. Phase I of the site’s redevelopment included the creation of the customer and staff reception areas, administration and management offices, and the employee restaurant. It began in late 2016 and was reported to have been completed in February this year.Wasting no time, Phase II commenced in April 2017, while Phase I was still in progress, and it will see St Athan’s three super hangars reconfigured to a state-of-the-art manufacturing facility for the production of Aston Martin’s first SUV (sports utility vehicle), which is due to start in 2019. Once the plant is fully operational, it is expected to create around 750 highly-skilled roles, in addition to further 3000 jobs across the supply ch in and local businesses in Wales.

Looking at the financial results Aston Martin reported for 2017, it would be safe to conclude that the new business plan has already started to deliver. Last year, the company recorded its highest sales volume in nine years, with global retail sales increasing by the incredible 58 per cent, compared to 2016. In addition, the group reached its highest-ever revenues of £876 million, up 48 per cent from the previous year.

Towards the end of 2017 and at the beginning of 2018, Aston Martin explicitly defined its target to increase its market share in Japan and China. The manufacturer outlined five-year trade and investment drives in both countries, worth over £1.1 billion combined. Picking up pace after a strong performance last year,Aston Martin is eager to reach top speed on the Asian market highway very soon