Back to Profile Gallery > AutoCrib Inc. 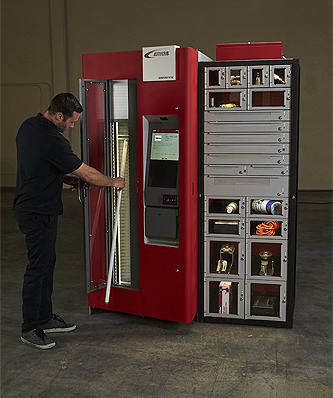 Keeping track of tools in a manufacturing plant can be a challenge, but AutoCrib Inc. offers an innovative solution. Based in Tustin, Calif., the company manufactures industrial vending machines that dispense products and help clients keep track of them, CEO Stephen Pixley says.

AutoCrib’s roots go back to the cutting tool distributorship Pixley formed in 1987. “I realized that [many] struggled with tracking tools on shop floors and who took them,” he recalls.

“Finding the tools when they needed them was an ongoing problem in manufacturing facilities,” he continues. “I would show up to a shop and they would ask me to jump in my truck and get another 20 of a certain tool when I knew I had delivered them the two days ago.”

Pixley got the idea for a vending machine that would dispense tools and built his first one in his garage. But getting companies to take them was not easy. “We went out and tried to sell these vending machines and no one would buy them,” he recalls. “Everyone thought they were a silly idea.”

AutoCrib adjusted by developing a contract that gave clients the vending machines for free if they bought the tools from him. “Over time, we grew that cutting tool business significantly faster than anyone else in the area, based on this machine concept,” Pixley says.

He spun off AutoCrib as a company in 2000 and sold the cutting tool distribution business in 2015. “We’re expected to do about $30 million this year,” he says, noting that AutoCrib works in several different industries, including metalworking, oil and gas, and aerospace. “The U.S. government is a large customer for us as well.“

AutoCrib’s machines do not take money, but instead allow workers to check out tools much like a person would check out a library book. Employees check out the tools using their identification and job numbers, Pixley says.

“The scanning technology allows the employee to authenticate himself, enter in his job number and other validation fields that the company wants to track,” he says. The machines do this with components from BlueStar Inc., one of AutoCrib’s longtime partners.

“They provide us with a lot of the peripherals that are on every machine,” Pixley says, including bar code scanners, RFID readers, prox card readers and smart cards. “All the user interface equipment that Blue Star provides us with, is integral to returning tools and supplies to the machines.”

“The machines can be set up to allow anyone to take as much as they need or to control the issue by Department, job, trade right down to the employee and the item if need be,” he adds.

Some clients, Pixley adds, have the system set such that no employee is allowed to leave until every tool is accounted for in the system. “There is a lot of control and sophistication in today’s vending machines, and AutoCrib was a pioneer in that control,” he states.

AutoCrib manufactures and sells 10 different machine products. “It’s one of the two widest product lines in the industry as far as vending machines are concerned,” Pixley says.

There are various types of machines found throughout AutoCrib’s market, including the helix-coil vending machines, which are normally used for dispensing candy. “The problem with those machines are they really require a lot of repackaging,” Pixley admits.

“You can’t just stick a pair of gloves in a helix machine,” he continues. “You have to have the right packaging [for them].” 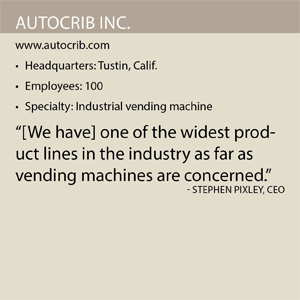 Many of AutoCrib’s customers have moved toward carousel technology, which is similar to the style found in a sandwich machine. “They’re much more sophisticated and heavy duty,” he says. “These are purposed to dispense tools and MRO supplies.”

With the carousel technology, users can reach in and grab the item through a portal, instead of waiting for it to fall into a drop pan like they would on a helix machine. It also allows them to easily return tools. “You can check out a pair of calipers and a micrometer, [and later] you can easily return them and someone else can use them from that machine,” he says.

AutoCrib’s market, he adds, is moving to hybrid systems that combine multiple technologies, such as load cells and lockers, or RFID systems and cabinets. “I think that’s a place where we’re going to see more in vending going forward,” he predicts.

“We’ll see some customers say, ‘I don’t care how much the vending machine saves me in consumption reductions (waste, fraud and abuse,’” he says, noting that they care more about how long their workers are at their workstations. “’A minute he’s looking for a tool or item is a minute he’s not producing the end product.’”

Placing a vending machine near a worker or workers can save a considerable amount of time they would have spent retrieving tools from a plant’s tool crib, Pixley says. “It can take eight to 15 minutes for a user to walk from his station to a tool crib and get the product he wants and return,” he says.

Initially, users take eight minutes to find the right tool with AutoCrib’s machines. But after they have used it several times, the time is cut in half, Pixley says. “It’s just like an ATM machine,” he says.

They also can help users find the right tool for their applications by prompting them for a job or operation. “The machine may have 1,000 different items, but it can subset its database down to just the tools they need to do that job,” he says.

AutoCrib stands on the premium end of the vending system market, Pixley says. Low-cost systems, he notes, are good for dispensing low-cost items.

“If you’re dispensing ear plugs, glasses and gloves, you don’t need a lot of sophistication,” he says. “But if you’re going to dispense gauges and fixtures, MRO items etc., that’s when you need a premium system.”

He adds that an automated locker, one of AutoCrib’s most sophisticated ways to dispense products, is becoming increasingly popular. “I would have thought lockers would have been obsolete 10 years ago,” he admits.

“But they grow and one reason for that is that they’re very visual,” Pixley says. “It’s easy for the user to find what he wants.”

The lockers also come in a variety of sizes and can be configured for the user’s needs. For example, “We’ve integrated in power and LAN capability into lockers so we can put in tablets and laptops in them,” and keep them charged and updated, he says.

Although AutoCrib is currently doing this for its clients in the aerospace industries, “It will affect all industries as time goes on,” he predicts. Other battery-powered items may be stored the lockers, including cordless drills.

“I think that’s what’s going to drive the growth of lockers for the future,” he predicts. “[Users will have] this ability to charge, update and keep things ready to go for the employee base and not have to pay a person to do it.”

Pixley sees a bright future for AutoCrib as companies keep tighter control over their assets and spending. “That’s not going to go away,” he states. “AutoCrib is a very innovative company and is constantly looking at how we can help them do that.”