Back to Profile Gallery > AV&R Aerospace 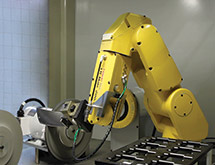 Little things like tiny imperfections on the surface of critical jet engine parts can affect the engine’s efficiency in a big way. Similarly, concentrating on a small portion of a very important and expensive market can result in big growth. That is the strategy that AV&R Aerospace has adopted.

“What we do is provide robotic solutions for part finishing, surface inspection and painting,” CEO Jean-François Dupont explains. “We focus our effort on the critical parts inside the jet engine. We decided in 2008 to focus our energy in that particular market. It’s not a big market, actually, but the goal of the company was to be recognized as the leader in that area and to use that recognition to explore other market segments. We succeeded pretty well, so now the company is well-known inside of the OEMs. On top of that, we have established R&D partnerships with Rolls-Royce, Pratt & Whitney and GE Aviation.”

AV&R Aerospace designs and contracts for the manufacturing of automated machines that finish the jet engine parts. A popular product is a system that creates the profiles on the jet turbine’s blades.

“The requirements now for the performance of the new engines requires an extremely accurate profile on these blades,” Dupont points out. “It’s not possible to do it manually, so you have to use robots. That is extremely popular right now. The size of our system – you could compare it to a refrigerator. It’s not that big, but there’s a huge portion of software in our systems. Basically, it’s a small system using robot cameras and lasers to give feedback. It’s just a simple system when you look at it that we improved over the years. The size will vary depending on the type of application.”

AV&R Aerospace has 80 engineers on staff. “We do all the concepts,” Dupont says. “We send out to our two different workshops the fabrication of the equipment, and we do the integration in our workshop and the final testing.” After customer trial and approval, the machines are shipped to the customer.

Commissioning the equipment at the customer’s site can take from two weeks to two months. “Two months is a big startup for us,” Dupont maintains. “Usually, two weeks is enough. On some of the machines, we just have to plug in the cord and that’s it. Other systems are shipped in different containers or trucks and we do the assembly onsite, but most of the time, we don’t have a lot of things to do onsite, which is good, because we work actually in 12 different countries. So we don’t want to send a complete team to our customers’ sites. It is very expensive for us. Most of the time, only one engineer is enough to start the system.”

Among those 12 countries are the United States, Canada, Mexico, the United Kingdom, Germany, Italy, France, Singapore, China and Russia. Dupont estimates that approximately 30 percent of AV&R Aerospace’s revenue is from Europe, up to 35 percent from the United States and Canada, and the rest from Asia. Approximately 70 percent of the company’s revenue is from the aerospace market and up to 10 percent from the energy industry. “A natural-gas-fired generator is essentially a jet engine on the ground,” Dupont points out.

The rest of AV&R Aerospace’s revenue is derived from the general automation industry. “In our local integration market, we find something that we could replicate, and it will become a market segment for us,” Dupont explains. “We will invest more and more to become a leader in that area.”

AV&R Aerospace has two locations in Montreal. It plans to establish regional offices internationally in the near future.

The company has doubled in size since last year, and Dupont is expecting that growth to continue in upcoming years. “We’re excited with what’s coming on for 2016, 2017 and 2018,” he declares. “They are going to be big years for us, and we expect a lot of volume in our manufacturing cells. The average age of our employees is 32 years old, so it’s a very exciting culture, and our employees like to be challenged. We appreciate their work. Innovation is part of our DNA. We put a lot of money into R&D every year so we come with new solutions. We are playing with robots, cameras, computers – it’s pretty cool.”

Dupont attributes the company’s success to its specialization. “In the past, we were generalists,” he explains. “We were doing every automation project that required a robotic vision system. We decided to narrow our expertise, and we succeeded.

“We have a mandate to diversify our market,” Dupont adds. “We’re looking to deploy our technology in the orthopedic industry. We are doing some trials on knee, shoulder and hip replacement parts for the human body that require surface polishing and inspection, the same kind of technology as jet turbine blades but in a different market.”