Back to Profile Gallery > Bär Cargolift

As the world of transport and logistics becomes increasingly more competitive and complex, Bär Cargolift develops innovative solutions that help shape the industry and lift performance

The leading tail lift manufacturer in Germany, and the second in Europe in terms of market share, Bär Cargolift has grown significantly since 1981 when Gerd Bär founded the company. Today the company offers Cargolifts for all applications and vehicle categories with working loads from 500 to 3000 kilogrammes, which includes standard tail lifts, tuckaways, single or 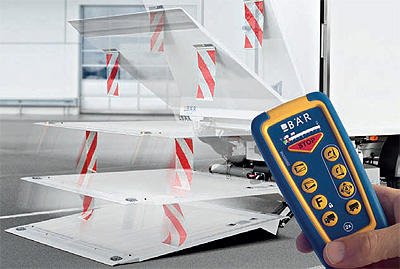 double folded retractable tail lifts and the Free Access Vanlift. Operating from its main facility in Heilbronn, where the first Bär tail lift was designed and manufactured by Gerd more than 30 years ago, the company manufactures all products in-house where it can ensure optimum quality and reliability.

Delivering mainly to trailer manufacturers and body builders throughout Europe, the dynamic company stays ahead of the competition through a long-held commitment to innovation as well as direct contact with many end users that mainly operate in the food logistics and general cargo sectors; through open dialogue with these organisations, the company is able to understand market requirements and thus develop its products further. Steffen Stumpp, Sales and Marketing Director at Bär Cargolift, elaborates on the company’s commitment to innovation by tradition: “Our founder has been a highly inventive man who holds a large number of patents and has introduced many gamechanging technologies during his professional career. Nowadays, his son, Tobias Bär, holds up this tradition and invests in even more useability, reliability and safety. Innovation is no end in itself; it ultimately has to add customer benefit.”

Thinking of current innovative developments, Steffen adds: “More recent innovations include the BC 750 S2L – the lightest cantilever lift for the 3.5 tonnes van segment – as well as the second generation of the so-called Bär SmartControl, a state-of-the-art remote control system for tail lifts, with unprecedented safety. The Bär Control EVO, which was launched in 2016, is an enhancement on our traditional control box with its intuitive joystick logic. We have changed the material of the shell from plastic to aluminium and improved the sealing of the joysticks to IP69; we have also moved all sensitive electrical components from the control box to the well-protected beam of the tail lift. Additionally, we have replaced the mechanical key on the control box with the so-called SwitchKey, which turns the lift on and off by simply applying a certain control sequence on one of the joysticks.” 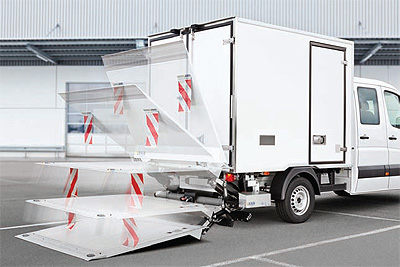 These new features, complete with robust new design, will reduce damages, failures and downtime, while also offering a higher level of safety via the SwitchKey. The operator is then able to specify the operating sequence himself and can then switch on and off the Cargolift with a movement of the lever. Furthermore, the installation of the Bär Control EVO has been made easier for the body builder.

Another notable innovation is the Bär SmartControl cabin control, which, together with two rear drive cameras and a monitor in the cabin, means drivers can benefit from a quicker ramp approach. Bär SmartControl with dockingstation is used for controlling the Cargolift, with the hand-held transmitter also used as a radio remote control; thanks tothe radio connection, there is also no need cable installation between the driver’s cabin and Cargolift. “More customers ask for remote control systems for their tail lifts, yet remote controls have some challenges with regards to health and safety,” says Steffen. “How do you ensure that the lift platform can’t be opened while the driver is still in the cabin? How do you secure the crushing and shearing points when the platform is being closed? Bär Cargolift’s developed SmartControl system offers a unique level of safety, with the second generation of the system due to launch soon; this will offer even more functionality.”

With a keen eye on market developments and potential opportunities for further growth, the company has recently responded to the 3.5 tonne van segment becoming the fastest growing commercial vehicle application throughout Europe with the launch of a new 750 kilo lift – otherwise known as the BC 750 S2L. “The big challenge in this segment is payload, so every kilogramme counts; this was the starting point for the BC 750 S2L, our new ultra-light tail lift that was introduced to the UK market at the NEC in April 2017. We managed to reduce the weight of the lift by 35 kilogrammes and our product is now the clear weight benchmark in this segment.” Soon to reach production of 15,000 lifts in 2017, Bär Cargolift continues to grow at a fast pace and will strategically invest in additional production capacity and new products to remain a leading competitor in the tail lift market. “Looking ahead, our goal is growing sales, excellent processes, motivated employees and ultimately satisfied customers; this is how we define our brand claim of ‘Lifting Performance,’” Steffen concludes.

Bär Cargolift
Products: One of the largest manufacturers of tail lifts in Europe