Back to Profile Gallery > Bearward Engineering

Six decades on from its formation in Northampton, UK, Bearward Engineering is today the global manufacturer of choice for industrial cooling systems

When we covered the exploits of Northampton-based Bearward Engineering in 2017, we spoke of the considerable growth of the business as it evolved into the largest producer of industrial 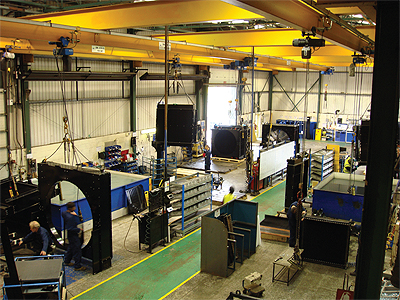 cooling systems and radiators in the world, and a key part of the powerhouse that is Wabtec Corporation. Also highlighted were the solid, global foundations for growth that the company had established, and when we recently caught up with Bearward’ s Sales Manager, Matthew Eggleton, it quickly became clear that these actions have being paying dividends.

“Over the last 12 months Bearward, as an operating unit, has taken powerful strides to integrate further into the day-to-day life of Wabtec,” Matthew begins.“By this I mean, we have been linking ever-more closely with our partners in key markets such as the United States, forming the ‘Engine Cooling Group’. We now have sales and engineering teams working under one umbrella, and these are helping to push our product into the NA region in order for the brand to gain a good foothold there.

“At the same time, we have also been expanding further into the India region alongside local licensed partners and into China where there are experienced Wabtec divisions already present. Each of these are considered strong growth markets for power generation work, and each is also home to many of our existing key customers who have their own global footprint, and it is a vital part of our strategy that we be next to them in the areas in which they operate.”

Over the course of the last 60 years, Bearward has become the premier supplier to the generator set market, and rapidly growing into the oil and gas, off-highway, rail and offshore markets, supplying cooling systems ranging in sizes from 50kW to 3.5mW. Meanwhile, in the United States, the continued rise of the fracking industry has made this a field of huge interest for the engine cooling group, one which it hopes to sell more components and solutions to in the coming years.

“The long history we have in the cooling systems arena is testament to the high-quality, innovative products, and leading engineering and back up support services that we have become renowned for providing,” Matthew continues.“These products of course include the modular/sectional based cooling system that we created and have perfected over the last 15 years or so. More end users are now identifying this system as being a unique selling point, and in response to this we have also worked hard in the past year to develop a lower cost, aluminium version of the modular core, and we are finding this solution to be very appealing to a whole new spectrum of customers.”

Internally, Bearward has also been investing in its manufacturing capabilities and its relationship with its various production partners. “We have put a fair amount of capital into the installation of robotic welding facilities within our prime locations in order to accommodate high volume fabrication orders,” Matthew adds.“This has initially been utilised by internal Wabtec business units, but it also now gives us the opportunity to reach out to other markets that also require fabrication work at relatively high volumes.” 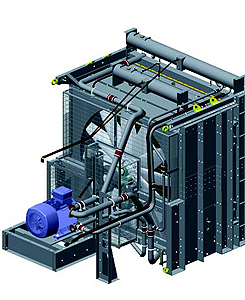 When we turn the conversation to what both the short and long-term future holds, Matthew is optimistic about what lies ahead. “All the data we have in front of us suggests that the future is bright and that there will be growth in the markets we serve over the next five-to-ten years,” he states. “What we need to do, however, is be focused on the goals and aims that we have over the next six months or so and push forward with those. This means we need to keep doing what we do well, continue to get better at manufacturing daily, improve our quality weekon- week, bring our costs down and ultimately ensure that we supply the highest quality components every time.There is a lot of business out there that we will be competing for and we want to be fully prepared for the demand we hope to experience.”

A great deal of this business will no doubt come from the United States, so understandably much of the focus of the company at present is on improving its visibility and sales here. It plans to do so by publicising its engineering and aftermarket service, which Bearward wants to see recognised as being of the same standard as all of Wabtec’s businesses in the region.

“Traditionally we have focused on key accounts with the major OEM engine builders around the world, and while that will still remain a big part of our activities we are now also reaching out to a local level of end user,” Matthew explains. “This forms part of our mission to be the manufacturer of choice for engine cooling systems, and that means reaching out to everyone, from the chief engineer of a global OEM to the person who operates smaller power generation sites. We want as many people as possible to recognise that they have the ability to buy the best products from us globally and that we will be there by their side to support their needs, as and when required in the future.”