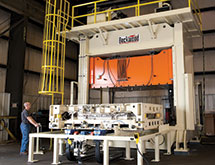 Beckwood Press Company has become a leader in engineering and manufacturing hydraulic presses, but it didn’t start out with that goal in mind. President Jeff Debus says the company was started in 1976 by Charles P. Becker Jr. as a supplier of other products around the country. Because the company’s products involved a lot of sheet metal stamping and forming, it started designing its own hydraulic presses for its own internal use. After a while, however, word got out to other manufacturers about the effectiveness of its presses and it began designing and selling presses for other companies. The rest, as they say, is history.

Today, Beckwood Press Company is recognized as one of the leaders in hydraulic press technology, with a global footprint that spans the Americas, Europe and Asia. Its presses can be found in applications such as hot forming, compression molding, sheet hydroforming and punching, among others. The company’s customers range from major OEMs in the aerospace and automotive sectors to smaller general job shops.

Debus says the nearly 40 years of success Beckwood Press Company has experienced is no accident, and comes from the company’s ability to serve a wide assortment of markets with products that stand head and shoulders above the competition. Through it all, Debus says Beckwood Press Company has earned a reputation for taking on projects other press manufacturers are reluctant to tackle, and that has been a major component of its success from year to year.

At the core of Beckwood Press Company’s corporate culture is its ability and willingness to take on virtually any kind of project, even if it seems too challenging for most others. “We tend to compete for the projects that are higher in complexity, that require some customization and tend to push the envelope in terms of utilizing existing technology or developing new technology,” Debus says. “Our general attitude is that we like the tough projects and the challenges.”

The in-house expertise that Beckwood Press Company can put to work for its customers gives it substantial confidence when a customer approaches it with a difficult project. “Customers are usually picking up the phone and calling us because they have a problem,” Debus says, adding that Beckwood Press Company relishes those opportunities to put its skill to work. “You have to have a can-do attitude in the industry today, and that’s something all of our team members have.”

Also contributing to the company’s ability to deliver difficult projects for its customers is Beckwood Press Company’s versatility and diversity. Debus says the company serves a diverse mix of companies, which gives it experience that is practically unmatched in the marketplace. “One of our strengths is the ability to handle a lot of different industries,” Debus says.

One of the key advantages this diversity gives Beckwood Press Company is the ability to use technology proven in one market segment on a product to serve another. Debus says being able to demonstrate to a customer why an unfamiliar technology or process can work by providing examples from other industries does a lot to convince many of them. “It allows us to put together a tailored solution that has a basis of proven technology and experience behind it,” he says.

The volatility of many of the markets Beckwood Press Company serves has only become stronger in the wake of the recession. Debus says the key for the company to survive is to offer its customers greater value. “What we’re trying to do to offset that volatility is offer more products and more services that reach out into our customer base,” he says.

The company recently added a broad product line focused on the aerospace market, which includes leading-edge and extrusion stretch forming presses, hot joggle presses and hydraulic ring expanders. The company has clearly identified a trend toward packaged solutions. “Our customers value the relationships forged with Beckwood, and appreciate the expertise we can bring to the table for a diverse set of applications,” Debus says. “When we can satisfy several individual needs for a single customer, our 360-degree value is best on display.” Beckwood is currently completing manufacture of a seven-press aerospace forming package that includes multiple sheet hydroforming, stretch forming and hot joggle presses, which is slated for delivery in early 2015.