Back to Profile Gallery > Bell Helicopter 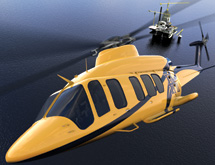 What goes up must come down – it’s an immutable law of physics as well as business. As one of the world’s leading manufacturers of military and commercial helicopters, Bell Helicopter is well-versed in that law, and the company’s current efforts are aimed at keeping its profits aloft despite the pending fall of military spending.

After several years of increased production of military products such as the AH-1Z attack helicopter and the V-22 Osprey military transport vehicle, Bell has begun shifting gears to ramp up its commercial production. Executive Vice President of Integrated Operations Pete Riley says Bell has learned some valuable lessons from its recent burst of military work, and it is eager to translate that knowledge to its commercial line. “We’ve completed the [military] ramp-up successfully, and now what we’re doing is focusing on ramping up our commercial product line,” he says.

The centerpiece of Bell’s commercial ramp-up is a new product named the 525 Relentless, which will be the world’s first Super Medium™ helicopter. The 525 Relentless represents one of Bell’s most ambitious projects to date, and Riley says it figures heavily into the company’s strategy going forward. “We see this as a critical aircraft for us,” he says.

Already a leader because of its strong manufacturing capabilities and adoption of lean principles, Bell nevertheless continues to look for ways to drive continuous improvements in projects like the 525 Relentless. By closely aligning the design and manufacturing elements within the company, Bell has been able to create further improvements in its processes, Riley says. In an economic environment where what was up can come down at any time, Bell is doing what’s necessary to stay in flight.

Even before taking into consideration the lessons Bell has learned from its recent military-sector activity, the company’s manufacturing operations are impressive. Riley says the company has many internal strengths that add up to success. “Obviously the most critical one is the process and the systems and the capability of our work force,” he says.

But when it came time to evaluate how the company would tackle the production of the 525 Relentless and the overall ramp-up in commercial production, Bell took a bird’s-eye view of its entire manufacturing operation. “It was really sort of a holistic approach,” Riley explains. “It’s not just about ramping up and making more, it’s about doing it much more efficiently.”

Riley says the company already has done a lot of lean work in its manufacturing facility, but it still looked over its processes and re-evaluated how it could make further improvements. In some cases, he adds, processes were more than a decade old, and new processes and layouts have been implemented. Riley says the fact that nearly every single component Bell makes costs less to produce today than they did even a year ago is proof that the company is on the right track. “What we’ve seen on our military aircraft is we’ve been able to deliver every military aircraft at below negotiated cost,” he says.

The 525 Relentless is positioned at the higher end of the medium class of aircraft and features superior payload and range. It has a capacity of 16 passengers, and is configurable to multiple missions including rescue, oil and gas, emergency medical transport and corporate transport.

One of Bell’s primary goals in the development of the 525 Relentless was to integrate manufacturing and design in such a way that ideas and concepts from both sides of the process could inform and improve on each other from the very beginning. Riley says the company experienced success doing this to some degree with the most recent military ramp-up and saw the potential to carry it over to the commercial side. “We realized that the sooner we can get engaged together as an organization … that can give us a real opportunity to optimize our design and optimize our engineering,” he says. “That work has been instrumental for us.”

To facilitate this process, Bell brought together the key personnel from the manufacturing and design sides as early as it could so they could collaborate on the design and engineering of the 525 Relentless. This meant relocating many of them to the same office so they could form teams built around specific goals.

Even though Bell already had a highly effective manufacturing operation in place when it started work on the 525 Relentless project, Riley says there were still obstacles to overcome. “One of the key challenges was that we had a very aggressive schedule,” he says.

Bell made nearly $600 million in capital improvements to its facilities over a three-year period leading up to the 525 Relentless project, and Riley says fitting all of that activity into a relatively short timeframe required serious planning, including helping its supplier base make improvements to their operations. “The real challenge was putting together a detailed plan down to the individual pieces of equipment and execute that over the course of three or four years,” he says. “It was a challenge, but we had a number of people tracking our progress on that and we were pretty pleased with what we were able to accomplish.”

The 525 Relentless figures to be a centerpiece product for Bell in the near future, but Riley says the legacy of that project should be felt throughout its manufacturing and design operations for years to come. “It’s become more than a project – it’s a culture change that has put new processes in place that will change all of our military and commercial projects moving forward,” he says.