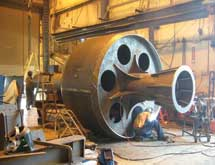 A foundation solutions company doesn’t remain in business more than 110 years by sitting idly by and accepting the status quo as good enough. In fact, Bermingham Foundation Solutions (BFS) continues to evolve to stay at the top of the piling equipment industry. These days, the company has em­braced lean manufacturing techniques in every department to pass savings on to its construction clients.

George Micevski, plant manager, says an engaged work force is key to the success of his “lean team,” which has been in place for about a year and a half.

“Every day, it is instilled in the employees themselves through an employee suggestion program to do anything you can do to make it better, faster or safer,” he says.

BFS was founded in 1897 with its first contract coming from the Canadian Pacific Railway. This project cemented BFS’s role in the construction of infrastructure throughout Canada.

Today, BFS operates as a united company housing two business units. Bermingham Construction – the or­iginal firm – specializes in deep foundation and marine construction in Canada. Bermingham Foundation Equipment manufactures custom foundation equipment for a global client base. Bermingham Foun­dation Equipment was established in 1969 and has grown into an industry leader. Its products include the Berminghammer line of diesel pile driving hammers, reverse-circulation drills, lead systems and a variety of custom foundation equipment.

Micevski doesn’t hesitate when he describes BFS’s equipment as the best in America and, possibly, the world. While his company’s products aren’t the most modestly priced items in the industry, he believes there is no compromise for quality.

“It is a little more expensive, but it’s like buying a Cadillac,” he says.

BFS raised its products to this level through continuous improvement on its lean journey, which began in 2008. The company’s “lean team” – which includes employees off the shop floor, engineering, quality assurance and production control – discuss lean manufacturing every Thursday at lunch to determine how to improve quality and production as well as eliminate waste.

Many companies that employ such a team might recruit the most experienced employees, or even the most technically skilled. BFS, however, focused on attitude when forming this team, as well.

“We looked at personality types as well as experience and put together a team where we could collaborate together on ideas and add to each other’s suggestions instead of arguing about the way it should be,” Micevski says.

The six-month-old program is de­livering results already. For instance, BFS had a product line it once “heat-treated” before sending out to clients. The lean team brought in outside welding engineers to analyze the process, and the engineers eliminated the heat treating from the product’s design. This eliminated $750 per piece for a yearly cost savings of $23,000 on this one product alone, Micevski reports.

“It was something we had always done, but no one could justify it,” he explains. “We’re going through every product we make and asking ‘why?’ until we can cut costs down.”

Along with the lean team, BFS sent a number of its supervisors for lean training at the University of Kentucky as well as at local colleges and universities.

Micevski also hosts monthly meetings with the entire plant to discuss progress as well as employee suggestions. All suggestions are rewarded and the benefits of the changes are discussed with the entire work force.  Recognition for people’s contributions is a key factor in the program’s success, he says.

BFS has invested in new technologies as well, such as a CNC plasma table for plate burning, which in­creased production by 630 percent. The recent addition of a CNC lathe with live tooling has a projected 60 percent cycle time reduction.