Back to Profile Gallery > Betenbender Manufacturing 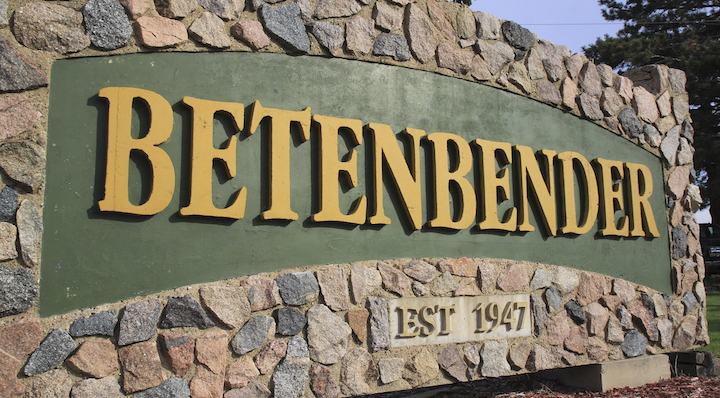 Simplicity is essential to the success of Betenbender Manufacturing Inc., owner and President Max Betenbender says. Some competitors add extra bells and whistles to their machines, but “we don’t,” he says. “We just build nice, simple basic machines.”

This formula works well for the company, which has a broad client base that includes the U.S. Military, Boeing Aircraft, Wm. Wrigley Jr. Co. and Tombstone Pizza. “It’s everything and everybody that has [a need for] metal cutting machines,” he says.

Based in Coggon, Iowa, Betenbender Manufacturing produces hydraulic shears, press breaks and frame presses. The company’s history goes back to the 1930s, when Max Betenbender’s father, Glen, worked as a blacksmith in Coggon.

He later operated a small fabrication and repair shop during World War II. By 1948, Betenbender and his wife moved the operation into its current location as a manufacturing and repair facility.

In 1967, Max Betenbender joined the company after serving in the U.S. Army. Five years later, he and his father built their first shear for themselves, but soon had requests to build them for clients both nationally and internationally.

There are more than 3,900 Betenbender machines in use across the world. “We’ve got them on every continent,” Betenbender says. Many of these machines are customized to their owners’ special needs. “If someone needs something a little special on a machine, we can custom-build for what they require.”

For example, one client recently requested a change in his machine’s height. “We’ve got to shorten it up because the guy’s door is five inches shorter than the height of the machines,” he explains. 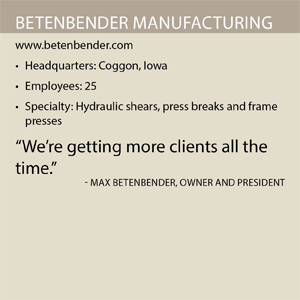 That flexibility has kept Betenbender Manufacturing strong in the face of international competition. “We’re seeing more stuff come from overseas,” he says. “But we’ve been holding good and steady.”

So steady, in fact, that the company has a healthy percentage of repeat business. “A lot of these companies are expanding and buying their second and third machines for their operations,” he says. “We’re getting more clients all the time.”

Some companies use the just-in-time approach to inventory, but not Betenbender Manufacturing. “We’re not that way,” Betenbender says, noting that it prefers to carry a large stock of inventory.

“If the customer needs a spare part, we can ship it [fast],” he says, noting that the just-in-time strategy could result in the company taking longer to serve its customers. “Also, when you buy in larger quantities, you get better discounts.”

Betenbender Manufacturing ensures quality in its operations through an employee incentive program, Betenbender says. Each quarter, he deposits money into an account specifically designated for equipment repairs.

“I will put anywhere from $200 to $1,000 into the account,” he describes. “Whatever is left in the repair fund is divided up among employees at the end of the quarter, and then we start again.”

This ensures that more machines are built correctly, Betenbender says. But if there is a problem, “Everyone knows about it,” he says, noting that employees usually do not react well when funds have to be spent. “It’s like you’re taking money out of someone’s pocket, and they get a little uptight.”

The longevity of his staff members also helps maintain quality. “It makes a difference when you’ve got an older crew and they know what to do,” he says, noting that this experience allows them to easily switch jobs on site.

When Betenbender Manufacturing’s employees want to expand on their skill levels, the company is more than willing to lend them a hand. “If any of these guys want to go to community college and take some courses, we’ll pay for them,” he says. “But they have to stay with us two years after completion.”

Betenbender is proud of his company’s longevity. “We’re still here after 40 years,” he says, noting that the amount of his competitors has dropped. “When we started, there were [approximately 20] companies. Now there’s only four.”

Some competitors have closed their doors, but Betenbender Manufacturing plans to keep growing. Not only is the company evaluating staffing levels, “We’re looking at a new building to move our flame cutting machines into, and maybe add a new surface grinder,” he says. “We’ve got 40 acres to expand on so we can spread ourselves out well.”

He adds that his family’s involvement in the company continues, with the involvement of his 20-year-old grandson, Cameron. “He works back in assembly, building the machines,” Max Betenbender says.