Back to Profile Gallery > BioLargo Inc. 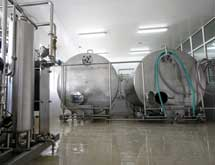 People of a certain age may remember how their grandmother would use iodine on their cuts and scrapes when they were children. Not only did it leave a stain, but it also stung on the wound. If only the positives of Iodine were available without the negatives. Good news – now they are! BioLargo Inc. offers a number of products that take the sting and stain out of iodine use.

“BioLargo’s iodine is definitely not your grandmother’s iodine,” President and CEO Dennis Calvert announces. Instead, “free-iodine” – or Nature’s Best Solution?, as BioLargo? calls it – is being used as an additive to control odor in pet products, an all-natural cleaner and disinfectant in manufacturing operations involving organic materials – such as in baking, brewing and bottling – and in all sorts of water treatments or cleaning applications.

The word “iodine” carries with it a number of myths. “When people think of the word ‘iodine,’ they often mistakenly associate it with toxicity and staining,” Calvert remarks. “Our BioLargo technology delivers the pure iodine molecule, I2 (thus, “free” iodine), eliminating the staining properties found in grandmother’s iodine. We deliver the iodine molecule unencumbered with complicated chemistry so it can do what it has been created to do, which is to cleanse the earth and help improve the quality of life for people worldwide.

“It is good for people and animals, good for the environment and good for business, but it is deadly for microbes,” he stresses. “Iodine, which has been well understood for almost two centuries, has been busy disinfecting and nourishing our earth for billions of years. It is often considered the ‘gold standard’ by which all other disinfectants are compared.

“Our Nature’s Best Solution?-branded Free-Iodine Wash delivers the identical molecule you can find in nature,” Calvert explains. “Iodine is a part of the natural water cycle. It originates in the ocean, reacts within phytoplankton and algae, and is stored in giant kelp. It is abundant in kelp and seafood like fish and shellfish. From the ocean, it out-gases and is sent up into the clouds and rained onto the earth so it can do its natural cleansing.

“Iodine is absorbed into the soil and is taken up into the plants, and then humans eat it in the plants,” Calvert continues. “It is a natural element and also an essential nutrient. Iodine is found in every cell of your body, regulates the thyroid, is critical for normal brain function, believed to help mitigate type II diabetes and is known to be a critical regulator of the normal life and death cycle of cells.

“Iodine deficiency (the lack of sufficient dietary intake) is believed to affect 2 billion people worldwide,” he asserts. “Amazingly, iodine is also arguably one of the world’s best and most potent disinfectants. It has no known microbial resistance, a broad spectrum of efficacy and is generally recognized as safe (GRAS) as a food additive by the FDA.”

Applying its odor control and cleansing Nature’s Best Solution to products is the task of BioLargo Inc. “We have patented the ways in which you can create, install and manage the delivery of free iodine within a product or system – or, as we like to say, ‘Nature made it…we put it to work for you?,’” Calvert explains. BioLargo adds its technology to its Odor-No-More-branded bedding additive for horses and other animals, creating a healthier environment for the animal and eliminating harmful and unpleasant odors.

BioLargo’s Odor-No-More? bedding was awarded an Editor’s Choice Awards and a Product of the Year Award by the Horse Journal, as well as a Best New Product Award at SuperZoo, an industry trade event where it first introduced the product. It’s also a powerful deodorizer for cat litter as an additive and can be added to materials for use in manufacturing, which includes a long list of products like soaps, liquids, paper goods, absorbents like diapers and pads and even coatings. BioLargo’s Free Iodine also can be delivered in much higher doses than other products, expanding its commercial opportunities into hard-to-manage industrial applications.

BioLargo’s disinfecting CupriDyne can be incorporated into bandages and medical pads to help keep wounds related to chronic infection clean and to help promote wound healing. “In the pads or bandage markets, we can install or embed the technology into the fiber matrix or coat the surface materials,” Calvert declares. “Then the features of the free iodine can be delivered in a product like a bed pad or diaper or bandage. We have also started work developing products for the wound care industry, which is really interesting work. We believe we will play an important role in helping heal patients worldwide. We have recently produced our first pre-commercial medical product, which is in testing and evaluation right now.”

The technology is not limited to dry goods. “We also have mastered the technology to generate the iodine and deliver it in a liquid media so that it can go in a spray or gel,” Calvert points out. “We also offer products that can be useful in the manufacturing process itself. We have formulated an industrial-strength-stabilized, free iodine liquid wash being sold under the brand name ‘Nature’s Best Solution?’ that can be used in the manufacturing process in place of more caustic and potentially toxic products. A gel version is available as well. Anybody that is in manufacturing might be interested in knowing about these products.”

Manufacturing processes that require odor control, cleaning or sanitizing are potential applications for Nature’s Best Solution or its CupriDyne?. “Companies that are in the business of manufacturing anything that might be organic in nature certainly would be looking at these products as a way to clean and mitigate odors, contamination or help control fungal growth,” Calvert asserts.

BioLargo’s products also are being examined for use in industrial water treatment. The company has been selected as a founding member of a Canadian Natural Sciences and Engineering Research Council of Canada research chair formed to solve the problem of contaminated water and tailings ponds in the oil sands industry. It was selected to join other industry stakeholders and world-leading companies including Shell Oil, Suncor, Syncrude, Canadian Natural Resources Ltd. and Total, as well as the University of Alberta and the regional water district for Alberta, EPCOR.

At present, the process of extracting oil from the sands in Canada creates more than 5 million barrels of contaminated water a day that currently is discharged into “tailings” ponds – sometimes for years – to separate the solids from the liquids for eventual recycling or safe discharge into the environment. It looks like BioLargo may have an important role to play in helping solve two huge problems associated with two vital sources of energy for both Canada and the United States.

In addition to the oil sands, the natural extension of the technology across any industry contending with contaminated water appears to point the company directly into the shale gas industry to help solve its hydraulic fracturing and related water issues. These two areas may set BioLargo up to be a major force in helping tackle two of the most controversial energy and environmental issues in the Western Hemisphere.

For many of these products that BioLargo supplies, it secures an exclusive supply agreement and is the contracted manufacturer. “We are aligning ourselves with well-established supply chain partners in manufacturing to produce products in large scale,” Calvert declares. “Our intellectual property includes our technology, formulations, patents and know-how. We have assembled a world-class science team to help our customers solve real-world issues for manufacturing.”

That expertise in free iodine and how it can be incorporated into products was accumulated from more than a decade of work and is critical to BioLargo’s success as it works directly with manufacturers to either improve a product or solve a problem. “In many ways, we have built quite a robust toolkit – the system and the processes – for delivering free-iodine so its features and benefits can be recognized and realized by a client without the negatives,” Calvert declares. “We’ve done it in such a highly effective way that it makes it easily accessible for multiple products and industry.”

As an example, in 2011 BioLargo signed a licensing and supply agreement with Central Garden and Pet of Walnut Creek, Calif., one of the largest manufacturers and distributors of pet supplies and lawn and garden products in the United States. “We’ve worked the last 10 months to prepare products under Central’s brands to go to market,” Calvert notes. “We believe that over time, this commercial effort could be much bigger than the minimum performance levels contracted.”

To support the nationwide rollout, BioLargo also developed a key relationship with The Horn Group, also headquartered in La Mirada, Calif., that brings with it a national distribution network to support its pet product rollout with Central Garden. “The Horn Group is one of our strategic supply chain partners that provides resources for large-scale deployment with a national footprint,” Calvert explains. “They are a highly technical team of professionals that gives us the ability to turn up the volume of product in a pretty big way. They are a great company.”

BioLargo was founded more than 10 years ago by Kenneth Reay Code, who was seeking a way of keeping his father safe from hospital-related diseases in a long-term care facility. He was bed-ridden or confined to a wheelchair due to a stroke and placed at high risk. Through that journey, Code discovered how to harness and deliver free iodine. He incorporated it into a medical pad – the first BioLargo product – and filed its first patents. “I met Ken in 2004,” Calvert recalls. “His passion and purpose is contagious. We helped in the development of additional patents and the proof of claims, and then in 2007, we acquired the assets in this company and joined forces to build a business. Ken is a recognized expert in the field of iodine.”

The publicly held company (BioLargo Symbol: BLGO) holds five issued U.S. patents and is on record with more than 20 additional patent applications relating to additional uses of the BioLargo technology. Code and Calvert are assisted by a team of 10 specialists.

“In the last year, we assembled a team of scientific minds,” Calvert stresses. “Many are scientists with leadership backgrounds at Fortune 100 companies such as 3M, DuPont, Halliburton and Pepsi-Cola and have backgrounds in water treatment and the oil and gas industry. We believe in the future we can set the standards for the way water will be treated across many industries.

“We have effective, environmentally friendly and safe products that industry and consumers demand that are unmatched in the marketplace,” Calvert concludes.