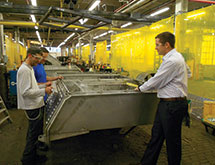 “There aren’t a lot of big opportunities in western New York for businesspeople with MBAs,” Richard Turner says. So, he created his own. Turner grew up in Jamestown, population 30,000, a city almost as far west in the state as you can go. After earning a bachelor’s degree in finance from Cornell University, working for two years in Chicago and then returning to Cornell to get an MBA, his roots tugged on him.

His family’s manufacturing background runs five generations deep: His father has owned and operated Matric Group, an electronics manufacturer, in nearby Seneca, Penn., since 1993. “I’ve been learning about manufacturing since I was very young,” Turner says.

What he didn’t know much about was metal fabrication, but that didn’t stop him from jumping at the chance to buy Blackstone Advanced Technologies, a $12-million-a-year, full-service sheet metal and light-structural fabricator with 100 employees and a 275,000-square-foot facility – located right in home-sweet-home: Jamestown.

“My father heard through an acquaintance that the previous owner was looking to retire. We met and quickly realized it was a good fit,” Turner says. “There is a learning curve to this business, but the same principles of manufacturing apply.”

Blackstone specializes in making metal products and components. It has significant capabilities in shearing, sawing, punching, laser cutting, forming, welding, spot welding and assembly. Its facility includes state-of-the-art machinery and extensive painting and powder-coating systems. All of the company’s work is custom.

Turner may be new to this particular industry, but many employees at the 100-year-old company have many years of experience in all phases of metal fabrication. “The people at the company have been terrific with the transition to new ownership,” he says. “They’ve been doing things a certain way for a very long time.”

But that doesn’t mean change isn’t underfoot. Turner invested in retooling most of the machines at the plant. He is expanding the company into new markets and updating technology systems to improve productivity. Blackstone is also broadening its supplier bench to get better terms and have more options.

Blackstone has the expertise and capacity to take on the largest volume order or the smallest specialty job, but it must do more to thrive, Turner believes.

The company serves a variety of industries, including transportation, military, scientific and industrial. The first two represent Blackstone’s core business.

Its transportation clients are primarily related to rail, including trains, subway cars and airport terminal people-movers. It has produced heating-and-cooling frames for customers ranging from Amtrak to the New York City subway system. It also makes invertor cabinets for locomotives and passenger cars, large hoods and rear noses for locomotives, alternator silencers, radiator cabinets and mufflers for locomotives and other parts such as brackets and enclosures.

Its military work is primarily for the United States Navy. For example, it makes aluminum furniture for Navy submarines, including dressers, filing cabinets and bunks.

Since Turner acquired Blackstone, the company started partnering with his father’s company, Matric Group, providing metal enclosures for cabling, controls and various other electronics to Matric’s industrial customers. “Matric is a much bigger company than Blackstone and we’re leveraging that relationship and its resources,” Turner says.

The strength of Blackstone’s personnel remains a top priority. Its staff includes a licensed engineer, an ISO 9000 assessor and AWS-certified welders and WELD inspectors. Many of the roles in the plant require extensive experience and meticulous training – welding, in particular, can be dangerous if not performed with caution and know-how. “We have very skilled professionals on our floor,” Turner says.

New management is helping those professionals maximize their output. “We work with the supervisors every day to increase efficiency and figure out how we can save money,” Turner says. Blackstone is installing a new enterprise resource planning system – to be fully operational by year-end – to better organize the floor and capacity plan as far out as a year or longer. “We don’t want to get parts we need until we need them and in correct quantities,” he says. “Right now, looking out beyond a couple weeks isn’t easy.”

He is most proud about the enormous pride Blackstone’s workers take in the product they put out the door. “The guys on the floor are as concerned about making customers happy as anyone in the company,” he says. “Without that, we wouldn’t be able to meet demands.”