Back to Profile Gallery > Bliley Technologies 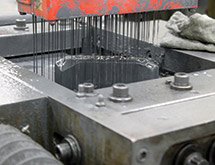 Cultured quartz crystals truly are the hearbeat of technology. Without high-quality quartz crystals and the crystal oscillators that utilize them, all kinds of technology – GPS satellites, television signals, magnetic resonance imaging machines, smart phones and even spacecraft headed to Mars – would not function reliably.

Bliley Technologies designs and manufactures the cultured quartz crystals and crystal oscillators used in low noise frequency control devices. Its products are used in telecommunications, military radar and satellite and microwave communications. Bliley’s expertise is in low phase noise under vibration and in low sensitivity to gravitational forces, such as are felt in airplanes, rockets and missiles.

One use of Bliley’s product is to provide reliable Wi-Fi in airplanes. “If a lot of people on a plane use Wi-Fi, it could be miserably slow because that plane is vibrating so badly, which can cause a noisy timing signal,” President and CEO Dave Curtis explains. “The data packets have to have a perfectly pure timing signal or they have errors and have to be retransmitted. If you test our oscillators in an aircraft, they are so low-noise under vibration that they can open up that bandwidth on the plane and provide a Wi-Fi connection that is much faster than the plane had before.”

If quartz is stimulated with an electrical signal, it physically moves or oscillates at a specific frequency depending on its thickness, such as 100 million times per second or at 100 megahertz. Such frequencies are used to set the timing for sophisticated electronic devices and instruments.

Producing quartz crystals requires high levels of accuracy and cleanliness. Bliley used to grow the synthetic quartz stone itself but now purchases it from a supplier. The quartz stone is sliced into wafers on a slurry saw or wire saw.

“When we get a stone, we have to cut the stone up into wafers at a specific angle in reference to the seed in the center of the stone,” Curtis explains. “Then you’re going to shape, grind and polish them using special lapping and polishing machines, measuring their frequency the whole time and looking for individual defects on them. The thicker the quartz is, the lower the frequency. The thinner the quartz, the higher the frequency.”

The crystal blanks are taken into a clean room where the appropriate plating mask is placed over them and they are loaded into a vapor deposition plater. It deposits gold or silver onto the crystal’s blank surface under high vacuum. This process changes the thickness of the crystal and thus its frequency. The crystals are then mounted on a base, after which a cold weld process is used to hermetically seal the cap to the crystal base while again under a high vacuum.

“This entire process takes six to eight weeks from start to finish,” Curtis says. “You’ve probably got 50 steps. If you don’t repeat those 50 steps exactly for that particular crystal you’re trying to build every time, you’re going to have a quality issue. It’s like a chemical recipe. If you miss one step – if you don’t repeat the process exactly throughout that six weeks – you will have a failed unit. You’ll have planned scrap depending on the part. You could have planned yields from 85 percent to 20 percent depending on the desired performance of the crystal you’re trying to make. It wouldn’t be unusual to have 80 percent planned scrap if you’re talking about a very precision unit.” Adding to the challenge is the fact that some portions of the process are done by hand, such as mounting a blank to its holder with tweezers under a microscope.

To build the oscillator, pick-and-place robots place hundreds of miniature components onto a printed circuit board masked with solder paste. The board is then placed in a reflow oven that liquefies the paste and solders the components to the board. The crystal is then hand-placed and soldered, after which the board is mounted in hardware. Skilled technicians then fine-tune each unit, utilizing high-tech test equipment that measures the phase noise performance as well as many other electrical parameters in the oscillators.

Improving yields and reducing scrap are the best way to reduce crystal production costs. Bliley Technologies emphasizes continuous improvement. Initiatives are underway to improve blank cleanliness prior to plating as well as improved angle control when cutting the quartz.

Innovative circuit design is the key to reducing labor and lowering cost in the oscillator assembly and test area. Bliley’s R&D efforts are continuing to innovate. “You always want to make the oscillators lower-power, smaller in size, with improved low G-sensitivity and low phase noise performance, and, of course, all at a competitive price,” Curtis emphasizes.

He estimates that the company produces on aggregate approximately 20,000 crystals and oscillators monthly. They are all custom-ordered. “We have standard products, but typically something is a little different on every one,” Curtis says.

The average employee’s length of employment with Bliley Technologies is 20 years, and the company experiences little turnover except when employees retire. “That is good, because both the crystal production workers and our engineers are hard to replace,” Curtis stresses. “This technology is not being taught in the universities or trade schools. This is learn-on-the-job. Our crystal and oscillator engineers are very valuable. If you ask any electronics engineer how much of their curriculum was based on crystal oscillators, you’re lucky if they had a chapter on it, and crystals would be nothing at all. So what you’re looking for is an outstanding electronics engineer who will welcome the challenge of complex RF and quartz crystal design.”

Although hundreds of companies manufacture some sort of crystal oscillator, only approximately 20 are direct competitors in Bliley’s niche. Curtis stresses that relationships with customers, vendors and employees are most important, along with flexibility. “The reason I think Bliley has been around for 85 years is that we’ve been able to adapt to change,” Curtis says. “We used to build a product here eight years ago that we would have sold for $150. It’s built in China today for $30. So you’ve got to evolve and stay in contact with the customer. You need to determine what cutting-edge product they will need in the future, and then win the race to deliver that product. You have to be the one they look to first to satisfy their requirement.”