Back to Profile Gallery > BÖHLER Schmiedetechnik

By embracing advanced and innovative approaches, BÖHLER Schmiedetechnik’s production facility in Kapfenberg, Austria, is keeping alive a tradition of forging that has existed since the mid-15th century

The third largest city in Styria, Austria, Kapfenberg has played host to forging activities dating back to 1446, when the first hammer forge was installed. Home to more than 23,000 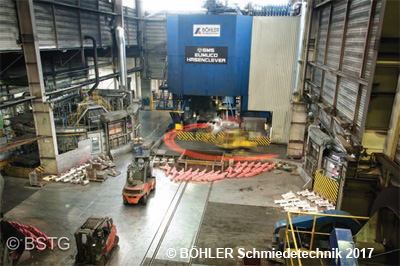 inhabitants, the main employer in the city is the steel manufacturer BÖHLER, a company which traces its own history back to 1870, when Albert and Emil Böhler purchased steel from a number of different manufacturers and sold it from their company Gebrüder Böhler and Co. in Vienna.

Over the following decades, the business underwent considerable change, acquiring other companies and establishing a number of subsidiaries. For its part, BÖHLER Schmiedetechnik was formed in 1991, following a re-organisation within the BÖHLER group. Originally specialising in servicing customers within the energy sector, along with the creation of different specialist applications, BÖHLER Schmiedetechnik, a 100 per cent subsidiary of the technology and capital goods group voestalpine, situated in Linz, Austria, is today one of the leading manufacturers of high quality parts for aerospace applications, which now accounts for more than 90 per cent of its business.

With its core competence revolving around the near net forging of titanium alloys, high alloyed steels and nickel-based alloys, BÖHLER Schmiedetechnik supplies more than 200 technologically advanced customers around the world. Examples of these customers include major OEM’s and Tier 1 companies such as Airbus, Boeing, Embraer, Bombardier, Gulfstream, Spirit, MHU and IHI. By embracing advanced approaches within the design process, the company is able to produce close-to-finish shape forging solutions, resulting in the best buy-to-fly ratio.

As one can imagine, working with the above companies requires a company to be able to ensure that the products it produces meet the extremely stringent demands of the aerospace industry. “The requirements that we have had to meet, in terms of process controls, quality and on time delivery have increased significantly in the last several years alone,” explains Gerhard Gerstmayr, BÖHLER Schmiedetechnik’s Vice President of Sales and Marketing. “When combined with new industry specifications that demand the best achievable property profile of all materials used this makes for a constant challenge that companies have to address.

“For our part, we have placed a strong emphasis on acquiring material knowledge, quality and process efficiencies, and optimum process control through the use of automation in order to meet the demands of the industry. We add to this further still through a combination of continuous investment in new processes, our ability to forge close working relationships with our customers and the strong commitment of our highly skilled personnel.”

In order to service its aerospace customers, BÖHLER Schmiedetechnik has initiated a stateof- the-art production process. This process begins with design engineering and modeling before moving on to die manufacturing, pre-forming and closed-die forging. Next comes heat treatment and pre-machining, before testing and certification is carried out priorto dispatch. The company’s production plant in Kapfenberg incorporates an in-house press forging shop, which itself holds two large screw presses with press forces of 35,500 tonnes and 31,500 tonnes 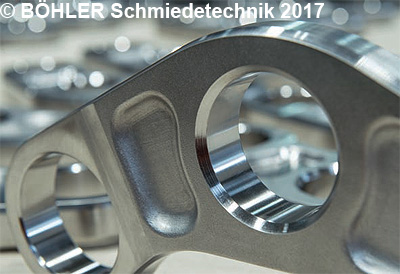 In April 2017, the company announced that it would be making a considerable capital investment in a fully automated pre-forming equipment line. The line itself will consist of two hydraulic presses, of 6000 tonnes and 1500 tonnes respectively, additional furnaces and new manipulators, including all the necessary auxiliary equipment. With this investment BÖHLER Schmiedetechnik is reaffirming its commitment to bringing the quality of its products up to the next level, while better ensuring process stability throughout the complete manufacturing process. This new equipment is expected to enter into service in the first quarter of calendar year 2019.

“While the products we have become known for making will remain much the same, this investment will allow us to raise our performance levels even further, creating a whole new benchmark in terms of process controls, product robustness and manufacturing efficiencies,” Gerhard enthuses. “While this programme is ongoing, we will continue to look at how we can both leverage and support the existing supply chain. One of the ways this can be achieved is by examining other possible specialties we could move into, for example ingot conversion, machining and surface treatment. Meanwhile, emerging technologies such as additive manufacturing, and the especially high deposition rate processes it creates, are of interest to us as well.

“We are taking a one-stop-shop approach to how we conduct our business. The result of this is that we are helping to contribute to the reduction of the complexities that presently exist within the supply chain, which in our opinion can only end up proving to be an asset to our customers.”