Back to Profile Gallery > Boomerang Tube 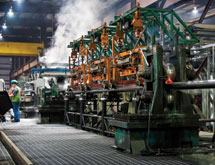 Boomerang Tube is a world-class producer of oil country tubular goods (OCTG) and line pipe. With 7 percent marketshare and projected 2012 sales of $450 to 500 million, it would appear that success comes easily to the company. In many ways it does – due to a number of unique business strategies and a dedicated focus on customer service, Boomerang Tube has excelled in the market. However, it has had to overcome some crippling setbacks, even before it was officially open for business.

President and CEO Gregg Eisenberg notes Boomerang Tube came into existence at a tumultuous time. “It was May 2008, just months before the economic downturn,” he says. “We planned for a 17-month development period during which equipment would be ordered. After that, we anticipated a ramp-up period before we would be up and running.”

Unfortunately, the plan didn’t unfold as anticipated. Instead, when the downturn hit in late 2008, oil prices plummeted and a hold was put on development at Boomerang Tube as the company waited for bank financing. “We went for about 12 months with the opening of the company being on hold,” he recalls.

Not until February of 2010 did business at Boomerang Tube commence. “We only had five months of activity before the stopper was put on us,” Eisenberg says. “However, in 2010, businesses recommenced and the plant came online.”

By October, Boomerang Tube had conducted the necessary tests to receive a full pedigree from the American Petroleum Institute, and the company was approved to produce its products. “We had to ramp up production quickly, and we’ve done pretty well since then,” he adds.

From the start, Boomerang Tube has strived to be the most responsive supplier of OCTG and line pipe products in the business. Even with setbacks in getting the plant operational, the company has been able to uphold its mission. The result of this dedication has been substantial success in a relatively short amount of time.

Because much of Boomerang Tube’s product catalog adheres to American Petroleum Institute Standards – thus it is produced as a commodity – the company has to manage the concept that its products will be similar to what competitors offer. As a result, Boomerang Tube has focused on offering quality products and outstanding customer service as a point of differentiation.

“Quality is No. 1 for us,” Eisenberg notes. “Our entire alloyed-grade product catalog is third-party inspected so that our customers have the peace of mind that items have been checked by industry leaders and inspectors.”

As Eisenberg further explains, Boomerang Tube was fortunate to have substantial capital funding when it was initially developed. This funding helped the company ride out the proverbial storm of the economic downturn, and it also helped the business acquire high-end equipment to produce specialized products. “We’re able to [develop] some unique products when others are not, because of our equipment capabilities,” he adds. “That has helped distinguish us from competitors.”

Even with advanced technology and equipment, Eisenberg credits customer service as the crucial element that has led to the company’s rapid success. “The amount of inventory returns we offer, the amount of finished goods we carry and the warranties, products and services in the field are all critical to allowing us to grow our business and increase in marketshare,” he says.

For Eisenberg, service also means adhering to the golden rule. “If you treat your customers the way you want to be treated – fairly and in a transparent manner – and if you treat your vendors the way you want to be treated – put yourself in their shoes from time to time – then you get a lot of cooperation and stronger partnerships than if you constantly think about what you want,” he explains.

In the last two years since Boomerang Tube has been up and running, it has noticed seismic shifts in the industry. As Eisenberg explains, horizontal drilling was initially focused on natural gas, which has been wildly consumed over the past several decades. But recently, the industry has shifted its focus to shale oil.

“We’ve had to be nimble and make sure our client mix has kept up with these changes,” he says.

This area has been so successful for Boomerang Tube that the company has embarked on a $45 million expansion of its manufacturing facility in Liberty, Texas. As Eisenberg explains, the company is not increasing the roofline of its plant. Instead, the site is being updated to utilize nearly all of its 500,000 square feet.

“To expand our capabilities in some high-value-added areas, we’re installing $100 million in new state-of-the-art equipment,” he says. “This equipment is going to really change the product focus of the company.”

“It’s not so much that the output of the carbon products is going to go down, but our production will rise enough to fill the other value-added capabilities that we just recently acquired,” he adds. “When the expansion is complete this summer, we expect our business to take in more of the market share.”

The expansion project underway at Boomerang Tube is a major undertaking. It involves the renovation and reorganization of thousands of square feet in an effort to make the plant as efficient as possible. When presented with the task of contracting specialized help for the renovation, Boomerang Tube relied on its past experiences and relationships with trusted suppliers and contractors.

As Eisenberg explains, AK Industrial Contractors of Searcy, Ark., was pivotal to Boomerang Tube’s renovation and expansion project. The company provided all of the pipe and equipment installation services for the Liberty expansion. “We chose AK Industrial Contractors due to prior experience with them in five other projects worked on by our management team,” he notes. “We knew they worked well with us and would get the job done on time and on budget.”

For Boomerang Tube, AK Industrial Contractors was the right fit for the demands of the expansion project. The company’s more than 30 years of experience in the steel industry was a considerable advantage when facing the tight timelines of the endeavor. “Their wide steel industry experience was an important consideration to us in choosing them,” Eisenberg continues. “Our direct experience with them was the deciding factor. AK is part of the Boomerang valued supplier group for this type work.”