Back to Profile Gallery > Bosal International 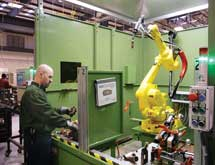 Many firms have suffered in the face of the economic downturn, but Bosal International has successfully weathered it with minimum disruptions, President of North American Operations Spencer Sterling says. “[We are] poised to take advantage of the inevitable upswing, which has already shown signs of having commenced,” he says. Based in Lummen, Belgium, Bosal International manufactures exhaust systems for passenger cars, trucks and industrial applications; catalytic converters; towbar systems; roof bars; and roof racks. Additionally, the company produces an extensive line of jacks and toolkits, precision steel tubing, cabins, warehouse racking systems and irrigation equipment.

“Bosal is a significant player in the exhaust system industry,” Sterling says. “It has been involved with the international automobile industry for over 50 years, and has a very strong brand identity.”

Sterling, who oversees the company’s North American operations from Ypsilanti, Mich., says Bosal’s presence as a supplier in many different coun­tries gives it a lot of experi­ence and innovation to pull from when dealing with international clients.

“It very often happens that we approach a prospective customer in one country who is a multi-national and already a customer of ours in another country,” he says.

Sterling is a longtime veteran of the automotive industry, but he joined Bosal only three months ago. How­ever, “I have known and worked with this company previously,” he says, explaining that he has been a business associate of Bosal Chairman Dr. h.c. Karel Bos for many years.

During a long corporate career, Sterling previously worked in six different countries for the Ford Motor Co. “I started as a graduate trainee with Ford and ended up as the CEO of subsidiary companies in a number of countries,” he says.

Although Sterling had retired from the automotive industry and was in­volved with other business ventures, “The timing was fortuitous,” he says. “Dr. Bos approached me last year to ask my advice on the direction to take with his business in North America.”

After numerous discussions, the two agreed that Sterling should take over as the president of Bosal’s operations in North America.

”I was very happy to ac­cept his offer,” Sterling says. “It’s great to be back in the automobile business.”

Sterling says Bosal weathered the economic downturn through a number of initiatives. “Cash was very carefully preserved through intensified efforts to reduce inventories,” he says. “We [also] worked with our customers, suppliers and bankers to plan and control our cash flow.”

The company also looked for areas where it could reduce waste and is strongly devoted to such practices as lean manufacturing. “Lean manufacturing is almost a religion in Bosal,” he explains.

“We use lean manufacturing, kanban, kaizen, Six Sigma – in other words, all the modern accepted techniques for reducing cost and waste, and ensuring optimum quality and on time delivery.”

One example of this has been the company’s adoption of robotic welding for complex operations. Sterling notes that this has not been executed with the objective of displacing workers but reducing cycle times, increasing throughput and eliminating defects.

Another strategy has been continuous advanced research, which has allowed the company to stay on the leading edge of product design, Sterling explains.

“Bosal has led the industry in the designs of things like lightweight exhaust systems,” he says. “It also is working on advanced systems that include heat exchangers and lots of other new innovations, which [are] aimed at both improving fuel consumption and reducing hydrocarbon emissions and ultimately eliminating greenhouse gases.”

Sterling says Bosal already has seen some improvements over 2009. “We have seen, just in the last month, quite significant increases in the size of orders we’re receiving vs. the previous forecasts,” he says, noting that lower costs and higher efficiencies will allow it to enjoy a better financial year in 2010 than in 2009.