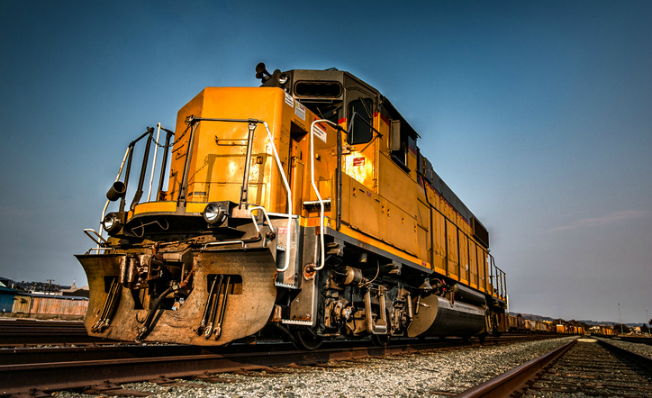 A visit to Cad Railway Industries dramatizes the scale of the transportation equipment on which the company’s employees work. Dwarfed by massive undercarriages, wheels and locomotives, the company’s workmen climb under, over, in and out of these giants, sparks flying from grinders and welders, and massive parts being lifted by overhead hoists to be remanufactured and improved.

But railroading is not the only category of equipment that Cad Railway Industries handles. It also services the rail, marine, mining and power generation industries. “Cad Railway Industries adds value to its customers’ supply chains by providing world-class, fast turn-around remanufacturing services, products and testing capabilities at a competitive price, using the best and safest technology, while promoting environmental and social sustainability,” the company says.

The company works hard to provide its remanufacturing engineering expertise and design services. It also operates a test center, where it offers capabilities and expertise in fuel emission and emission control engineering.

Over the years, Cad Railway Industries has developed and trained a specialized workforce consisting of professionals and tradespeople who perform structural, mechanical and electrical repairs. The team also has the expertise in redesign to remanufacture all types of rolling stock.

“Consisting of engineers, technicians, mechanics, electricians and certified welders, we are equipped to successfully deliver and provide an uncompromised quality product to our customers,” the company says.

In 1993, the company began servicing and remanufacturing freight cars and tankcars as well as passenger and freight locomotives. In 1995, it set up a testing facility to conduct break-in, performance and emission tests.

Cad Railway Industries is located in Lachine on the periphery of Montreal, Quebec, Canada, and is serviced by both the Canadian National (CN) and Canadian Pacific (CP) Railroads. Its facilities are situated on 1.5 million square feet and have a building area of 190,000 square feet. The facilities are capable of accommodating more than 200 railcars outside, in addition to 70 railcars in its shops.

The shops are equipped with seven overhead cranes with capacities from 20 tons to 90 tons that span up to 82 feet. The facilities also have an automatic and a manual blast and painting and curing shops.

Many of Cad Railway Industries’ jobs are related to the diesel engines that power rail infrastructure along with shipping, mining and power generation equipment. For nearly half-a-century, its products have been used all over the world and in all types of different industries.

Cad Railway Industries also repairs and remanufactures locomotives. “We have the ability to redesign as well, which enables us to bring older equipment up-to date with the latest technology,” the company says. It installs microprocessors, layover heat systems, electronic braking systems and a head-end power genset on F40 locomotives that were built in the early 1980s.

Among the projects that Cad Railway Industries has successfully completed are:

• Remanufacturing of VIA Rail Canada’s fleet of EMD F40 locomotives; 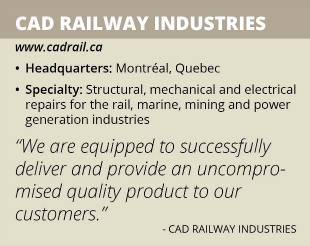 • Prototyping of the ECO Repower locomotive for EMD; and

The engine testing facility at Cad Railway Industries covers an area of 20,000 square feet and houses the latest equipment and engine test-beds. This equipment can provide a wide spectrum of scientific data to simulate any condition. It allows the company to offer a new dimension in research and development to corporations and government organizations that require comprehensive analysis.

Cad Railway Industries says it is the proprietor of intellectual properties that cover mechanical, electrical and structural remanufacturing criteria for passenger and transit car repair and remanufacturing. These critera were developed by successfully completing these programs:

• Repair of fire and accident damage to passenger cars for VIA Rail Canada;

• Remanufacturing of bi-level transit cars for the Metropolitan Transportation Agency in Montreal;

• Final assembly and commissioning of bilevel transit cars for Bombardier Inc.; and

Additionally, Cad Railway Industries says it is AAR M-1003 certified and is fully equipped to repair, modify or upgrade any and all types of freight cars and tankcars. The company’s experience includes:

• Modification and complete refurbishing of boxcars including conversion of existing double-sliding doors to 10-foot plug doors. The company also completely blasts and paints the interior and exterior of the boxcars.

• Upgrading and modification of 70-ton boxcars to 100-ton boxcars by modifying and strengthening their existing structure and underframe.

In addition to AAR certification, Cad Railway Industries’ facilities also are approved by Transport Canada and the Federal Railroad Administration in the United States to requalify tankcar tanks as per HM-201, which specifies crashworthiness and how to detect flaws in tankcar tanks.

Prime Railway Services is the steel and railcar parts fabrication department for Cad Railway Industries. Prime Railway Services has been supplying railcar doors and components to railcar manufacturing and repair facilities for more than a decade. It has expanded its product offerings to supply components to different industries. Target markets include the marine, mining and power generation industries.

Cad Railway Industries also distributes components for Alco diesel engines along with EMD and GE components. It is equipped to remanufacture and requalify many other types of components, as well.

With its capabilites and the skill of its employees, Cad Railway Industries can provide remanufacturing services and parts with a high level of skill and quality to a variety of industries including rail, marine, mining and power generation.