Back to Profile Gallery > C&D Zodiac 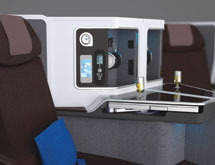 Manufacturing its own composite materials has given C&D Zodiac the edge over competitors. “We are capable of producing high-quality, high-strength, low-weight composite constructions,” points out Tony Guy, vice president and general manager. “We produce many of our own raw materials – honeycomb core and preimpregnated fabrics – and then we also produce the composite constructions that are high-strength and low-weight in our many manufacturing facilities including our Santa Maria, Calif., site.”

These composites are made of fiberglass, Kevlar and graphite as base construction materials and are combined with various plastic resins to meet the Federal Aviation Administration’s (FAA) cabin interior flammability requirements. “We have very stringent FAA regulations about the materials that are allowed to be used in an aircraft interior cabin to ensure that there is no loss of life in the case of an aircraft accident or fire,” Guy notes.

Those composite materials are developed by C&D Zodiac’s research and development (R&D) engineers and are proprietary to the company. “We have our own raw material divisions,” Guy states. “We actually have R&D within all our manufacturing sites, whether they are manufacturing a raw material or a piece part for a final assembly. C&D is very innovative, and in order to be innovative, it requires us to spend on R&D applications to keep us ahead of the rest of the industry.”

Guy ranks C&D Zodiac as the leader in regional jet interiors and a competitor in narrow-body and wide-body interiors.

“Zodiac Aerospace – the company that owns C&D Zodiac – is very predominant within the narrow-body and wide-body market,” he says.

The company looks ahead at its goal of being the best, not at those it is running beside. “We have a different philosophy than many companies,” Guy declares. “We consider that we are competing with ourselves. We’re always striving to improve our company or image and our performance. We have our goal set at being the premier world-class supplier of interior products. We don’t necessarily put as much focus on our competitors as what we can do better within our own organization.”

“The business we compete in is highly competitive with multiple companies,” Guy concedes. “So price can be an indicator, but also delivery and quality. In our product type, I would say the first most important requirement is high quality, because the people who fly on these components expect high quality, and the airlines do, as well.

“The second item is on-time delivery, because that can affect having aircraft in service,” he continues. “And definitely price – airlines are very competitive among each other. There are constant airfare wars. These airlines need to ensure they are making profit, as well. The profit of most airlines is very slim because their margins are small, so the margins they allow us to have are also small.”

C&D Zodiac and its sister companies within Zodiac Aerospace manufacture practically everything passengers see in aircraft interiors. These include seats, galleys, lavatories, closets, cockpit doors, bulkheads, ceiling panels, cabin lighting, overhead bins and sidewalls. The companies also supply many components passengers do not see, such as fire suppression, smoke detection, oxygen and cabin management systems; the video control center; crew rests; stair houses; insulation; escape slides; and water and waste systems. The companies’ products are used on the newest passenger jets, such as the Boeing 787 Dreamliner and the Airbus A350.

“Everything we provide is fabricated within a C&D facility or another Zodiac facility, and it is 100 percent complete, but each of these items is like a piece of the puzzle,” Guy explains. “They get sent to an aircraft, and all the pieces have to be installed within the shell of the aircraft fuselage.”

Running on the floor the length of the aircraft are tracks to which the seats and cabinets are attached. Their prefabricated, modular construction enables the airlines to modify the layout of aircraft and adjust seat spacing when required. That spacing in turn affects the design of seating and components, Guy says.

For example, within C&D Zodiac is Aerocell Corp., which manufactures flat honeycomb panels for C&D and another sister company named Driessen. “So Driessen may be the supplier of a gallery or lavatory using C&D components,” Guy points out. “C&D manufactures very complex seat shells in the business-class seating area for our sister companies, who will provide them to the airlines. So our products sometimes have a sister company’s name on them depending on where it is used in the aircraft.”

The company’s single manufacturing plant in Montreal produces one-of-a-kind interiors of business jets for large corporations, movie stars or heads of state. But the seats manufactured for commercial airplanes are produced in larger quantities, depending on the number of aircraft a manufacturer produces monthly. “We’re standardized within an airframe,” Guy explains. The interior components are different for each type of plane and manufacturer but are standardized for each plane and customer. “Our components are designed to fit that very specific fuselage and the customer,” he says.

Some parts – such as attendant call buttons, air nozzles and other devices on the service units above passengers’ heads, and the oxygen generating systems and masks – are standardized within different classes of airplanes, such as among regional and narrow- and wide-body aircraft.

Guy hesitates for competitive reasons to detail the manufacturing improvements C&D Zodiac has made recently, but he testifies to the company’s commitment to efficient manufacturing. “We are a leader in lean manufacturing, and we use automation processes where applicable, but we are still a company that values our employees, and we also value their input into each of these products,” Guy declares.

The length of production runs varies widely for the components. “We’ll make components for the life of an aircraft if that is required,” Guy offers. “Many, if not all aircraft, go through revisions during their aging process in order to keep that aircraft competitive. The 737 you buy today is not the same as the one built in 1970 – they’re constantly improving. The same goes for our products. Since we manufacture interior components, most airlines like to refresh their interiors, which means purchasing a new interior in order to keep the aircraft from looking old and dated. So we will produce those new components. You might be flying on an older plane with a new interior and not know. It’s dependent upon what the requirements are that the airline has given to us.”

The FAA has granted C&D Zodiac parts manufacturer approval on many components, meaning it can supply aircraft components and parts directly to airlines who have purchased the planes without going through the OEM. It also has an FAA organization designation authorization to reconfigure aircraft.

“We have a high number of engineers designing and testing our products in Santa Maria for all of C&D Zodiac,” Guy notes. “This is a good location because we are strategically located between two engineering schools at the University of California at Santa Barbara and California Polytechnic State University at San Luis Obispo. So it’s a strategic location between two outstanding engineering schools. We do hire engineers from other places all over the United States. We have engineers here from other countries, as well.”