Back to Profile Gallery > Caetano Bus

The buses of the future

Caetano Bus ha a long tradition as being leader of its industry and helping to innovate, which in recent years has been demonstrated as it has taken a determined approach to developing the latest electric buses

Caetano Bus manufactures buses and bodies mounted on chassis of various brands that are designed to different specifications for areas such as urban, tourism and airport services, as well as other products with unique solutions for niche markets. Caetano is the most important manufacturer of buses and coaches in Portugal and most of its products are intended for export, which transport people in locations across the world. It is a company that uses technology, innovation and design to always be one step ahead, and is creating vehicles that will appeal to the market now and in the future. 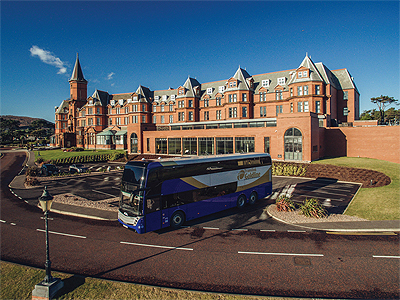 The company begun in 1946 when its founder Mr Salvafdor F. Caetano set up the business and built wooden framed coach and bus bodywork. From the very start of the business its founder installed a mentality and approach within the company that focused on being quick to adapt to changes, and to look to the future and secure it. This is why throughout its history the company has improved upon what it does and diversified, and it has become a leader in the industry for adopting the latest technology. There are countless examples in which Caetano has done this, and the first took place in 1952 when it became the first coachbuilder in Portugal to use composite wood and steel construction. The company made a similar move in 1955 when it conducted another first for Portugal to become the first to use a new technique involving all steel construction.

It has also continued its forward thinking attitude to this day, which has seen the company shift towards creating electric buses, and this is an area that looks likely to be the future of automotive industry. CEO Jorge Pinto expanded on this: “We have invested over the last four years in the electric side of the business with a figure of €7 million, which we are confident will be returned over the next few years. As a part of this we have also conducted the necessary integration of all the different systems within the electric area, and to support this we have a continuous process of training and reinterpretation of our quality standards, as well as safety rules in production.” These factors have helped to create a new wave of buses that are pushing the industry into a bold new future that is centred on electric vehicles.

The flexible and positive mentality at the company was displayed once again during the economic crisis in Europe, when it was able to successfully weather the challenging period and come out the other side with a larger portfolio of products and markets it was supplying these to. Jorge discussed the two-pronged approach that Caetano took: “Basically we were working two dimensions, one was new markets for our existing products and the other was to find new ranges of products – an evolution of our designs. The first allowed us to venture into new markets, and as a result we have found several that are already proving very promising. These have largely come from the Middle East and Gulf regions, with countries such as Oman and Qatar. In addition to this we are continuing to explore the market for smaller city buses that offer more mobility. In terms of the second part of the strategy it involved developing new products and this saw us diversify into district mobility with electric models. For example, the electric city bus model called e.City Gold, which is a very reliable, very low fuel consumption, but high performance bus, as well as the e.COBUS, an electric airport bus.” 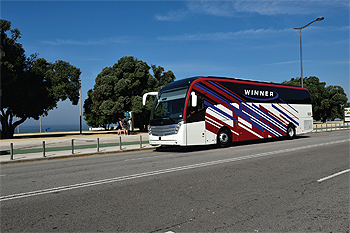 Its range of modern buses are for a diverse number of locations, and it is intent on increasing this even further and making its busesresilient to extremes of heat and cold. Caetano’s products also supply many different sectors, which include minibuses, buses for tourism, buses for urban areas, and those that serve airports. Due to the quality, diversity, and electric focused approach of Caetano, its products are proving popular around the world. Caetano Bus is the exclusive manufacturer of COBUS, with more than 3000 airport buses worldwide, and of LEVANTE, a coach developed and manufactured exclusively for National Express in the United Kingdom. This presents an insight into the varied nature of Caetano’s application, and with many 1000s of its buses in operation in over a 100 countries it is no doubt a business with a positive future.

The work that Caetano has done on developing the future of buses is exciting, not only has it helped lead the way in terms of electrical vehicles, but is also looking ahead at the possibility of buses that use autonomous technology. In regards to this Jorge said: “We think that autonomous vehicles pair well with the electric solutions to a much greater degree than with traditional diesel, and we have a variety of future strategies that are all within the electric model area. There are a number of different autonomous functions that will help to improve these vehicles, whether that is systems to watch for cyclists or other vehicles, or the ability to process traffic signs, all of these functions are associated with electric designs.” Jorge went on to discuss the future he sees for these vehicles: “I think it could become quite similar to airplanes that are built now, which have a pilot there but most of the flying systems are automated. It is not unlikely that a similar thing could happen in cities with buses, where there is a driver for emergencies and other factors, but it is significantly autonomous. This would mean we can optimise consumption and running of the vehicle, and it would make the driver’s life much easier, and this is the sort of direction we are working in.”

Therefore, with the automotive world changing significantly, and big shifts towards environmentally friendly vehicles, plus leaps forward in technology, within all of these aspects Caetano is shaping the future of the industry. Through taking an approach that embraces and harnesses the latest innovations Caetano is creating electric buses that are reshaping the transport world, and offering an alternative that is better for the planet and the customer.

Caetano Bus
Products: Manufactures a variety of coaches and buses mounted on chassis of various brands