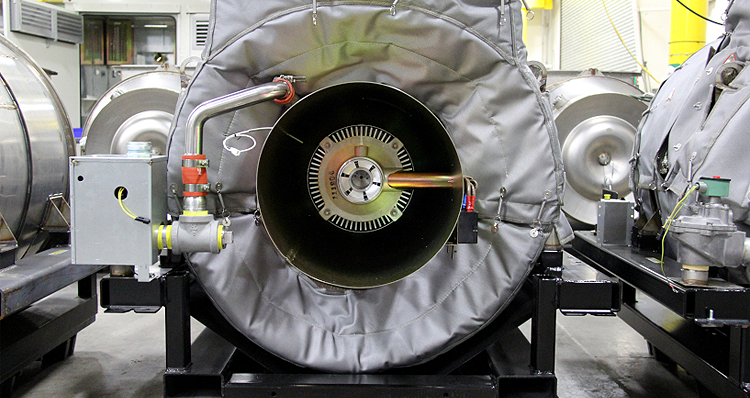 Kirk Petty, vice president of manufacturing at Capstone Turbine Corporation of Van Nuys, Calif., describes the company’s microturbines as a powerplant in a box.

“Our largest product fits into a shipping container,” Petty says. “You can move it with a forklift or overhead hoist or crane. The size footprint for the amount of power they put out, it’s a high ratio.”

Power generation is a large market but microturbines are Capstone basically has the microturbine segment to itself. And while many are familiar with big manufacturers of generators, Petty says not a lot of people have heard of Capstone. “We are a very small fish in a very large bowl,” Petty says. “The competition is either very large companies or the power grid itself.”

Petty isn’t worried. “We are the new kids on the block,” he says. “Airplanes took almost 50 years to see commercial application. The same with telephones and automobiles. We understand our technology is probably intimidating in new and emerging markets. [However] they can be used in an endless array of applications.”

Examples of Capstone installations have included oil platforms, a five-star restaurant, a brewery and a village in Africa that uses propane as its energy source.

Multiple Fuels
Capstone goes all over the world to sell microturbines but misperceptions about its product sometimes make those sales challenging. “Anywhere in the world you can find a diesel mechanic, but when you tell them you have [the equivalent of] a small jet engine, they worry it is harder to maintain,” Petty notes. “That’s based on a false bias.”

Microturbines have only one moving part – their air bearings – which are lubricated by air. “The core parts don’t really need to change,” Petty says. “A reciprocating [piston driven] engine had hundreds of moving parts. Ours has one. It only requires a periodic filter change.”

Microturbines can run on various types of fuel. While natural gas is the most common, microturbines will also run on propane, flare gas, landfill gas, digester gas, diesel, aviation fuel and kerosene. “Basically, if it burns, out system can use it,” Petty says. “Our engineering teams are very quick to develop a solution. If a customer needs a system to run on butane, we will try to get it there.”

To get its microturbines into use, Capstone offers a financing plan that requires no money down. “There is usually a quick return on investment,” Petty says. “[The customer] is getting heat and power and not running off the grid. We’ve had some luck with financing. It’s another way to get the product out there.”

Tight Relationships
About 90 percent of the parts in Capstone’s microturbines are manufactured outside the company. “We maintain tight working relationships,” Petty says. “We are always updating them. We have 360-degree performance metrics – they report on us and we report on them.”

Capstone works with its suppliers on inventory control. “We negotiated with suppliers to hold the larger, bulkier inventory,” Petty says. “We try to maintain a low amount of inventory. If I stocked everything I needed for 750 configurations, I would have $60 million in inventory.

Like many U.S. manufacturers, Capstone has been impacted by tariffs. “They’ve been a hindrance to us recently,” Petty says. “Our larger suppliers increased their prices and lead times. We had to hurriedly adapt and bring on new suppliers. It damaged us for a while but we managed to find new suppliers.”

Clean and Green
Another advantage of microturbines is that they have low emissions compared to other technologies.

“Our product complies with the world’s tightest air emission standards,” Petty says. “Being in California, we’d have to do that anyway. The gases burn pretty clean and there is a catalyst option to clean fuels on the way in or exhaust on the way out.”

Beyond the microturbines, Capstone is close to running a zero-waste manufacturing facility. “We reduce, reuse and repurpose,” Petty says. “We want to make it so Capstone has a carbon-neutral footprint.”

Tools for People
“I am most proud of the people themselves,” Petty says. “I have 45 people on the production line and 60 in operations. People want to do their job and want to take pride in their output. My job is to give people the tools.”

Among those tools is cross-training. “Human resources incentivizes them [with merit increases],” Petty says. “There is a three-month production cycle. At the end we see people move around. It helps with morale – people aren’t doing the same thing every day. Also, there is back up and more back up.”

Petty says he communicates “a forward-thinking vision” to his team. “I believe if I take care of the team, they take care of me and we reach goals together,” he explains.

A Single Location
In 2018, Capstone consolidated its two manufacturing facilities in California’s San Fernando Valley into a single 66,000-square foot facility. This saved money on leasing and allowed its manufacturing operations to become faster and more efficient by having all production and workers in a single location, Petty says.

The move took four months and was completed without stopping production. The number of manufacturing workers remained the same after the consolidation.

For the foreseeable future, Capstone will continue to promote its technology to potential users. “We’re a relatively new technology and we don’t have people lobbying for us in Congress,” Petty says. “We have to keep getting out there until our technology is adopted by the public. It’s a matter of exposure.”

Capstone microturbines are used in a variety of applications on all seven continents, but Petty is particularly pleased with how 96 of its microturbines performed during Hurricane Sandy in 2012. “Some of the only sites that were operational in the Northeast were those that had Capstone microturbines,” Petty says. “There was also an immediate need for back-up power in the Caribbean that ran off propane. We were able to prepare microturbines in a couple weeks.”